Manchester United will need a couple more signings after Jadon Sancho in order to be serious contenders for the Premier League title next season, according to former Tottenham midfielder Jamie O’Hara. Borussia Dortmund and England winger Sancho is United’s No 1 target in the current transfer window. However, O’Hara believes Ole Gunnar Solskjaer’s squad will still need further improvement if the 20-year-old moves to Old Trafford.

United finished the domestic season in third place but a massive 33 points behind champions Liverpool.

O’Hara says the signing of Sancho would put United “back amongst the elite” but he does not think it would be enough to topple either Liverpool or Manchester City for top spot next term.

“It puts them a lot closer,” O’Hara told talkSPORT.

“I think it puts them right back amongst the elite, you know.

JUST IN: Willian to Arsenal ‘done’ as Chelsea ace to sign two-year contract 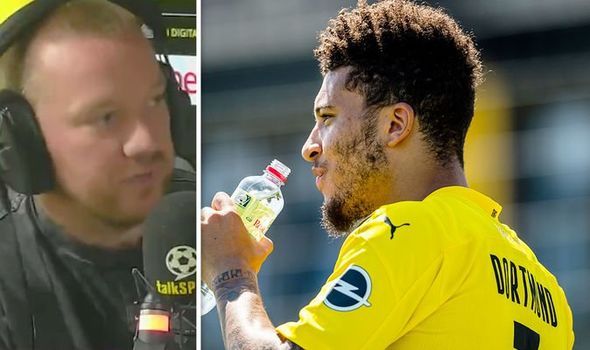 “I think obviously Manchester United are a huge football club anyway but they’ve been way off it.

“Yeah they finished third but everyone was kind of surprised at that in the end.

“But with a signing like Sancho, I think then you’re talking like: ‘Now we’ve got a proper squad here’. I think it would be a brilliant signing.

“I would say it puts them close [to being title contenders]. I think they’re one or two signings off it.”

Dortmund are holding out for over £100m for Sancho, who scored 17 goals and provided 16 assists in the Bundesliga this season.

And Crystal Palace winger Andros Townsend believes that fee would be cheap for a player of Sancho’s quality.

“Paying £110m for a player of his age and his quality, I think he’s more than worth that. He’s English, he’s young, I think they’re getting a bargain if they are getting him for that price.

“Obviously he’s going to bring a lot of creativity, he’s a very fast and skilful player, he can play on both wings, he’s two-footed, he’s played overseas so can handle that pressure of leaving his family.

“Like I said before, he’s a world-class player and at £110m I think Man United are getting a very, very good bargain here.”

Riley is the Reds’ best

Garber: MLS games to have fans ‘where we can’
Man Utd ace Jesse Lingard delivers honest response to transfer rumours
Best News
Recent Posts
This website uses cookies to improve your user experience and to provide you with advertisements that are relevant to your interests. By continuing to browse the site you are agreeing to our use of cookies.Ok