Manchester City have unveiled their new home kit for the 2020-21 season featuring a mosaic design that they will wear for the first time this weekend.

Designed as part of their 10-year, £650million deal with sportswear giant Puma, the home shirt is based on ‘the famous mosaics in the creative hub of Manchester’s Northern Quarter’.

The jersey features the mosaic pattern across the front in City’s traditional blue and white, with navy trim. The kit is then completed with white shorts and light blue socks. 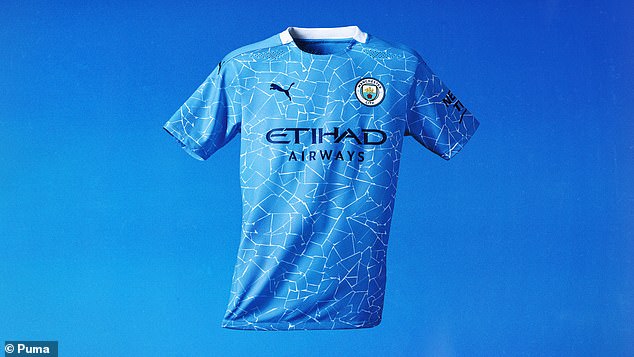 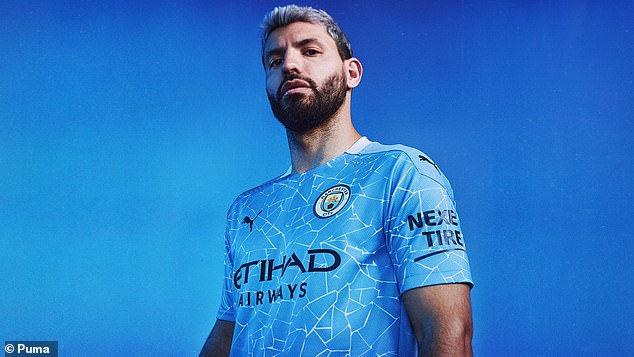 Sergio Aguero poses in the kit, which features a mosaic design across the front 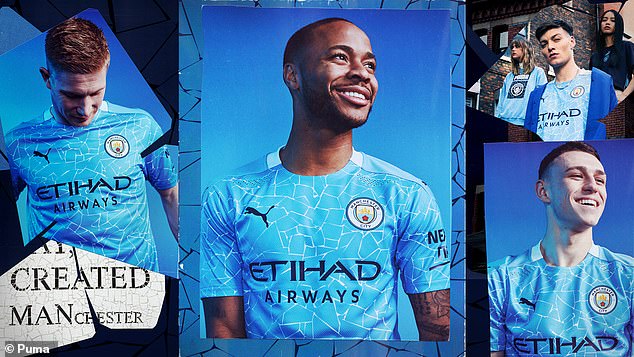 Kevin De Bruyne, Raheem Sterling and Phil Foden all pose for the camera in the new kit

The home kit is now available for fans to buy but will set them back at least £65 for a replica shirt.

The new home kit will be worn for the first time in Manchester City’s FA Cup semi-final match against Arsenal on Saturday, July 18.

It was revealed during an incredible unveiling video published on Thursday morning, featuring a host of the club’s famous faces and the backstory of where the design came from.

Mark Kennedy, the artist behind the mosaics of Manchester’s Northern Quarter as well as the player artworks at the City Football Academy said: ‘When I began my journey as an artist, the Northern Quarter was a derelict area that I looked at and wanted to build up.

‘I began creating Manchester icons using ceramic plates and tiles, integrating my own artistic style. My family and I have always been huge City fans, so I created artwork of the players too. 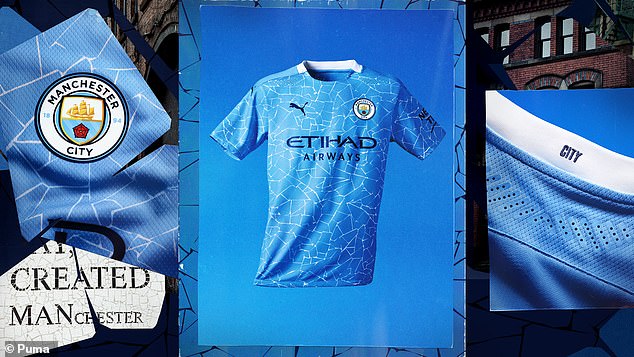 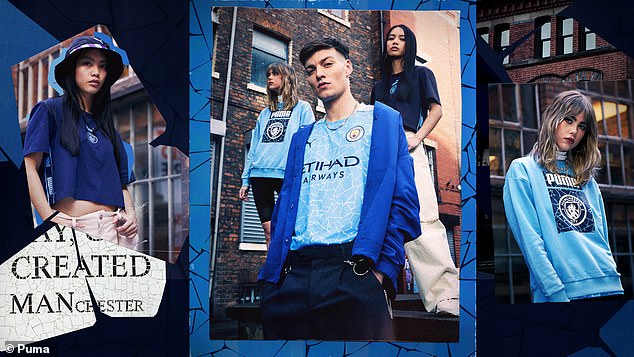 It is part of a new range of City gear, which fans will be hoping to get their hands on soon

‘Over time I was commissioned to create artwork for the club and the city of Manchester, so I feel very privileged to see PUMA use my art as inspiration for the new City Home jersey.’

Pep Guardiola will be hoping the kit can help his side strike back against Liverpool in the battle for the Premier League title.

After back-to-back league wins, City were comfortably beaten by the Reds this time around and sit 18 points behind Jurgen Klopp’s side with two matches left to play.

The reaction to the kit on social media has been mixed with some fans claiming potential new signings would suit it well.

One wrote: ‘Grealish would look good in this kit. I’m just saying’.

Another added: ‘Koulibaly will look mint in this’.

Clearly the kit has the ability to grow on people with one writing: ‘Didn’t like this kit at first but now I’ve watch the promo I get!’.

Obviously not everybody was pleased, as another tweeted: ‘It’s not our best home kit’ alongside a hand over face emoji.

Southampton vs Brighton live stream: How to watch Premier League fixture online and on TV today
Arsenal 2-1 Liverpool: Champions stumble again after Gunners comeback
Best News
Recent Posts
This website uses cookies to improve your user experience and to provide you with advertisements that are relevant to your interests. By continuing to browse the site you are agreeing to our use of cookies.Ok