Praise the fixture computer! An opening day Premier League encounter to furiously count down to: Leeds United, back in the top flight after 16 years, at Anfield, to face Liverpool, starting a campaign as defending champions for the first time in three decades. The idiosyncratic Marcelo Bielsa trying to outwit the magnetic Jürgen Klopp.

And good lord, it didn’t disappoint. An instant classic, featuring so much of what we love about football condensed into one 90-minute package.

For all the differences in Saturday’s late afternoon kick off, the new season started like the old one: bio-secure, empty stands, socially distanced from the colour, cacophony of voices and the euphoria that would usually frame a fresh beginning. It felt a disservice to the scale of the fixture when the teams walked out to no reaction. A sadness filtered through that of all grounds, of all games, of all days – it had to be like this, now, here.

Jurgen Klopp would scold that it is pointless focusing on things that cannot be changed, but it is human nature to ponder what might have been. Then the game kicked off – press, pass, dart, Bielsa screaming while hunched on the touchline – and everything else faded fast. It was all about the football, and my god, was the football enjoyable. Intense, open, aggressive, decorated by stanzas of superb offensive play and some bonkers brain farts.

By 33 minutes, five goals had been scored. Sadio Mane also had a clipped effort from 40 yards disallowed with Illan Meslier stranded, but Andy Robertson was offside in the build-up. The Leeds’ keeper had to make a top intervention to thwart what would have been quite the own goal from Pascal Struijk.

Everything was happening and it was happening ridiculously fast. Only four minutes had been played when Mohamed Salah’s shot hit Robin Koch’s outstretched arm and he rocketed in the resulting penalty. Start as you mean to go on and all that…

Liverpool were in the mood, but not at the back. A super long pass from Kalvin Phillips was wonderfully taken by Jack Harrison on the stretch, stationed out on the left. He ghosted past Trent Alexander-Arnold and Joe Gomez before directing a low shot past Alisson from the edge of the area.

The final-third ping pong continued. Virgil van Dijk powered in Robertson’s corner to give Liverpool the advantage again, but he then badly erred. Stuart Dallas hit a long ball searching for Patrick Bamford, but the centre-back reached it first. He tried to flick it towards Roberston, but failed with the Leeds striker ensuring the mistake was punished. Bamford clipped the ball past Alisson and into the net.

Three minutes later, Robertson’s free-kick was headed clear  – but only as far as Salah. In space around 15 yards out, the forward manipulated the ball with his right foot and then used his left to thunder it into the roof of the net. Breathless, bonkers, brilliant entertainment. 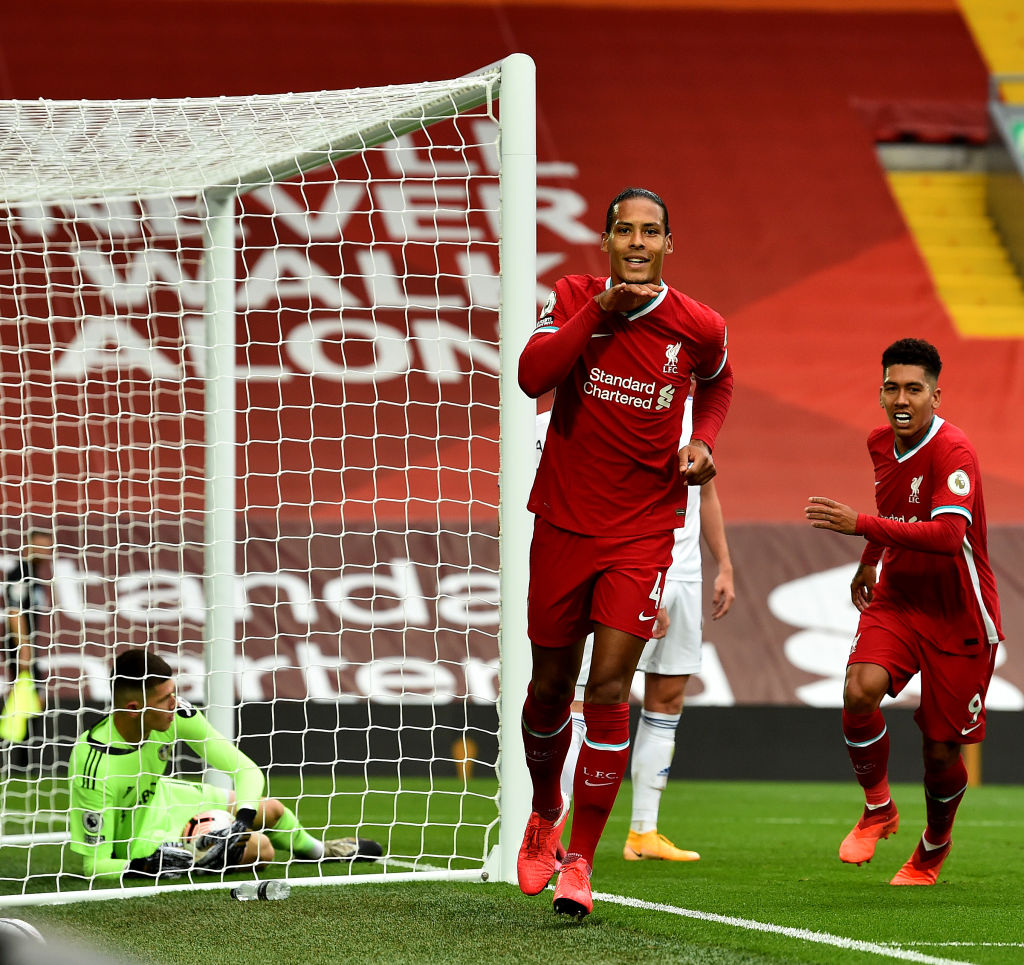 The second half didn’t see as many goals, but there was no drop off in ‘did that just happen?’

Koch sent a long pass over the defence to Harrison, who lobbed Alisson. Alexander-Arnold rushed to keep the ball out, but could only head it into his own net. He was relieved to see the offside flag.

Liverpool were perhaps taking Klopp’s assertion that they would attack rather than defend the title too literally. His players turned observers as Leeds thieved possession high up the pitch with Mateusz Klich feeding Helder Costa, who slipped it back. The Poland international lifted the ball up with his first touch before smashing a volley into the corner.

It was 3-3 at Anfield. Bielsa paced around his technical box, Klopp flung his arms out and both teams sped forward for the winner. A fourth disallowed materialised: Van Dijk had the ball in the back of the net, but Curtis Jones had tripped Koch in the build-up.

Salah, unsurprisingly, would have the decisive say. Rodrigo, Leeds’ record signing on as a substitute, was too desperate to make an impact and needlessly fouled Fabinho in the area.

The Egyptian stepped up to the spot, slotted emphatically, marked his hat-trick and won the match.

Welcome back, Leeds. More of this every week, please.

Carragher confirms Liverpool want to sell four players as Reds struggle vs Leeds
Salah bags hat trick, earns 9/10 as Liverpool outlast Leeds 4-3
Best News
Recent Posts
This website uses cookies to improve your user experience and to provide you with advertisements that are relevant to your interests. By continuing to browse the site you are agreeing to our use of cookies.Ok