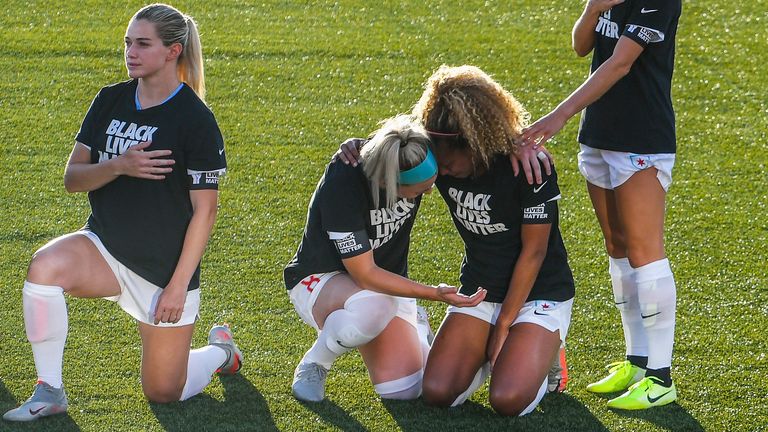 The US National Women’s Soccer League (NWSL) has announced players can choose to remain in the locker room or express their individual views on the pitch while the national anthem is being played.

The NWSL said the decision to provide additional flexibility by revising pre-game ceremonies for the Challenge Cup – a quarantined summer tournament in Utah – followed discussions with players, club officials and other stakeholders.

Every player from the North Carolina Courage and Portland Thorns took a knee during the anthem and wore t-shirts with ‘Black Lives Matter’ on before their game on Saturday.

NWSL Commissioner Lisa Bair said: “The NWSL stands behind every player, official and staff member. Kneel on the field. Stand with your hand over your heart. Honour your feelings in the privacy of the locker room or at midfield.

“The NWSL is a league that was built on diversity and courage and those principles will continue to drive us forward.”

Not every starting player took a knee during the game between the Chicago Red Stars and Washington Spirit, however Red Star teammates Julie Ertz and Casey Short shared a tearful embrace as they knelt during the anthem.

The incident led to a statement from the NWSL Players Association, which read: “Whether a player chooses to kneel or stand during the national anthem is a personal decision and is not indicative of whether they support BLM [the Black Lives Matter movement] or their teammates.”

Wisdom stabbed in head and buttocks by masked gang as police give attack details
Chelsea get final chance to cast judgement over signing their own Bruno Fernandes
Best News
Recent Posts
This website uses cookies to improve your user experience and to provide you with advertisements that are relevant to your interests. By continuing to browse the site you are agreeing to our use of cookies.Ok