Manchester United legend Phil Neville has pinpointed two decisions Ole Gunnar Solskjaer has made which proved he was good enough to manage the Red Devils. Solskjaer was first appointed United boss as on an interim basis in December 2018 following the sacking of Jose Mourinho. The Norwegian had a storming start to his time at Old Trafford but a poor end to last season and disappointing start to this led to question marks over his capabilities as manager.

However, United were on an unbeaten run of 19 matches in all competitions heading into Sunday’s FA Cup final and in a good position to qualify for next season’s Champions League.

But Neville says there were a couple of decisions Solskjaer made at the beginning of the campaign which showed he had the ruthlessness to manage his former club.

Neville said the sale of Romelu Lukaku to Inter Milan and loan of Alexis Sanchez to the same club was a positive sign of Solskjaer’s credentials.

Lukaku had only joined United two years earlier and Sanchez was the club’s highest earner.

JUST IN: Jamie Redknapp is ‘sure’ over one new signing Tottenham boss Mourinho will make 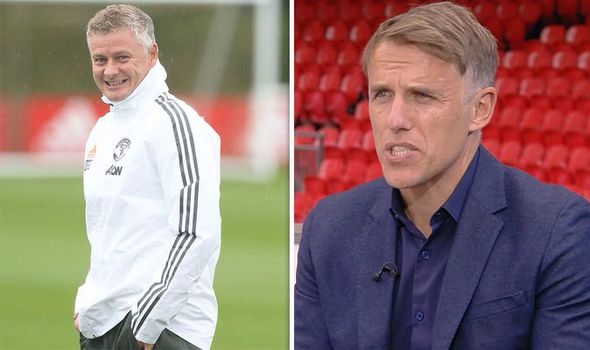 “I was quite lucky, I sat next to [Solskjaer] in the dressing room and on the bench for a lot of our Man United careers,” Neville said on BBC One.

“So I knew he was someone who knew systems and tactics, he spoke about players a lot and I think the biggest thing for me was when he got rid of Lukaku and Sanchez.

“I thought to myself he’s got the ruthlessness to manage a club like Manchester United because there were three managers before that that had great experience and he didn’t have that experience, but he’s done unbelievable so far.”

Anthony Martial, Marcus Rashford and Mason Greenwood have more than taken up the mantle following the departures of Lukaku and Sanchez, scoring 60 goals between them this term.

And Arsenal legend Ian Wright believes the trio are vital to United’s title chances in the next few seasons.

“So all of a sudden Ole’s faith in them is being repaid, the question is can they do that continually?

“We know that Wayne Rooney for years continued scoring goals at an alarming rate, same with Robin van Persie.

“But now we’re seeing this new three here, can they continue with that consistency?

“Because if they do, they will be challenging City and Liverpool, with what they’ve got backed up, obviously they’re going to need some defensive cover and players.

Chelsea boss explains Christian Pulisic absence in Man Utd FA Cup semi-final
Manchester United goalkeeper David de Gea makes woeful error
Best News
Recent Posts
This website uses cookies to improve your user experience and to provide you with advertisements that are relevant to your interests. By continuing to browse the site you are agreeing to our use of cookies.Ok