For the younger Nicklas Bendtner, whose hedonistic lifestyle involved going out, drinking and gambling, “from six o’clock in the evening until four in the morning” as many as five times per week, a 50-day lockdown in Copenhagen would have felt like punishment.

But when the coronavirus outbreak brought life to a temporary standstill in the Danish capital in March, Bendtner, a reformed character at the age of 32, used the downtime to reflect. Together with journalist Rune Skyum-Nielsen, he threw himself into the process of piecing together his autobiography.

“It gave us a lot of time to be able to go deep into the project without any disturbances,” Bendtner tells Sky Sports on a Zoom call. “We worked on it a lot during those 50 days. The time we put into it was many, many hours… Although it was probably a few more hours for Rune as he had to write it, whereas I just had to talk.”

Skyum-Nielsen, sitting alongside him during our call, leans into shot and interjects. “Yeah,” he says, “but you spent quite a lot of hours experiencing it.”

And what a ride it was.

From the unforgettable highs, such as coming off the bench to score the winning goal with his first touch in a north London derby at a packed Emirates Stadium aged 19, to the despairing lows, when his career was slipping away in a haze of alcohol and personal strife. It is all chronicled with brutal candour in Both Sides.

“It was very important to me that it was completely honest,” says Bendtner. “I didn’t just want to create another self-portrait where you only talk about the positive things in life and all you have achieved. I wanted to give a picture of what goes on off the pitch as well as on it.”

It was, he admits, a draining experience to go over it all again.

“I think I went through the full spectrum of feelings when we were doing it,” he says, smiling. “There were some very joyful moments and very difficult times too.”

Bendtner had resisted requests from publishers to release an autobiography earlier in his career but his stance softened after he developed a close relationship with Skyum-Nielsen. 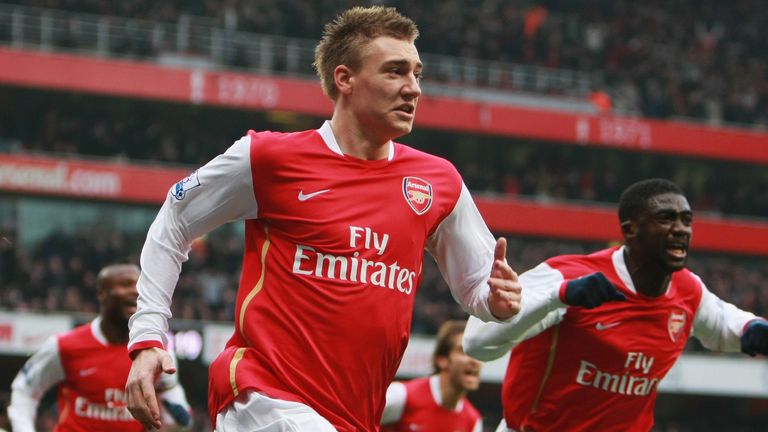 “It had to be done with someone who I trusted completely,” says Bendtner. “It was only after a few years that he really let his guard down,” adds Skyum-Nielsen.

“I felt it was very important for me to finally speak out,” continues Bendtner. “I had been very quiet about my situation and my life and I felt it was important to put my own voice out there and be heard. So, as much as the process of doing it was joyful and tough, it was also necessary.”

Bendtner accepts responsibility for his past mistakes, admitting in the book as early as the opening chapter that he became “too fond of the lifestyle that came with the money”. But he is not the first young player to have struggled with the dizzying financial windfall that often accompanies the step up from academy to first team.

For Bendtner, that step up involved the receipt of a six-figure lump sum from Arsenal on his 18th birthday and a lucrative loan spell with Birmingham in the Championship. “When I see the numbers in the contract, there’s no doubt about it, I accept on the spot,” he says in the book. “They are offering me what is definitely an adult wage.”

The loan spell at St Andrew’s served as a stepping stone to the Arsenal first team but it also introduced him to the lifestyle which ultimately proved his undoing. He describes his accommodation, a penthouse apartment in the city, as a “full-on playboy mansion”. A run of four nights out in a row “isn’t unusual”, he says. His £35,000-a-month wages “quickly grow wings and disappear”. 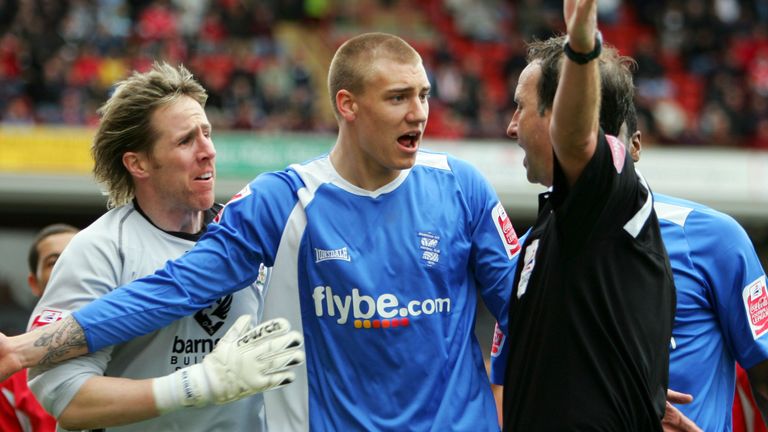 Bendtner speaks of his respect and gratitude towards Arsene Wenger, Steve Bruce – who managed him at Birmingham and later Sunderland – and long-serving Denmark boss Morten Olsen. But he lacked a guiding hand in his personal life. His father, with whom he no longer speaks, “got weak when the money got big”, he says.

“I think it’s important to have an adult with you at that stage of your career, when you go from the academy to being a professional player,” says Bendtner. “Someone to tell you how to manage your life, your time, your money. Someone who can help you navigate the experiences you go through when you are becoming a man…”

“And the temptations,” adds Skyum-Nielsen, after a pause. “Yes,” nods Bendtner. “Someone to lead you on the right path, away from those temptations.

“I was a very curious young man in many different aspects. My curiosity about all the things that came with football became very strong and I wasn’t really prepared for that. So, it would have been quite nice to have someone who said, ‘It’s okay to be curious, but remember the big picture’.” 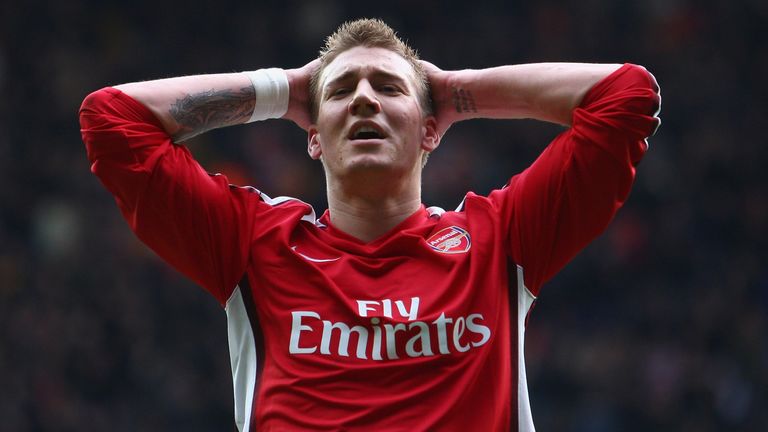 It is only now that he sees it. Bendtner was rated as one of the most promising young strikers in Europe as a teenager but his “curiosity”, as he terms it, made it difficult to fulfil his huge potential. Does he feel he let Wenger down by allowing his focus to wander at Arsenal?

There is a pause as he considers the question. “I think I could have done more, definitely,” says Bendtner. “I could have driven it further. Looking back now, I agree with that. But at the time I didn’t see it that way.”

Bendtner is keen to point out that it was not all bad, either. Far from it. It is a testament to his natural talent as a footballer that, despite the extra-curricular activities that crept into his life during his early years at Arsenal, he was still able to perform at a high level.

Between the 2007/08 and 2010/11 campaigns, and despite frequently operating as a substitute, Bendtner scored 43 times in 153 games for Wenger’s side. He boasts an overall record of 30 goals in 81 international appearances for Denmark, some of which came at major tournaments.

“Sometimes it’s frustrating that people forget about the things you have actually done on the pitch, because I did a lot on the pitch,” he says. “People often associate me with the negative stuff, but there were also some great and unforgettable moments on the pitch. It’s important to say that I’m proud of what I achieved.”

Bendtner is a different person now but his character as a young man – the unwavering self-belief, the stubbornness of feeling he always knew best – did not help him at times. It led to clashes with a string of older team-mates, including Thierry Henry, who once gave him a two-hour dressing down at Arsenal’s training ground, and helped to shape the ‘Lord Bendtner’ persona that came to define him.

It was no coincidence, however, that many of his off-field indiscretions came during periods when he was injured.

The thrill of the casino became a substitute for the adrenaline of playing. “It feels like scoring against Spurs in front of 60,000 crazy Gooners,” he says in the book of winning £220,000 during a night of high-stakes poker at Les Ambassadeurs Club in Mayfair. 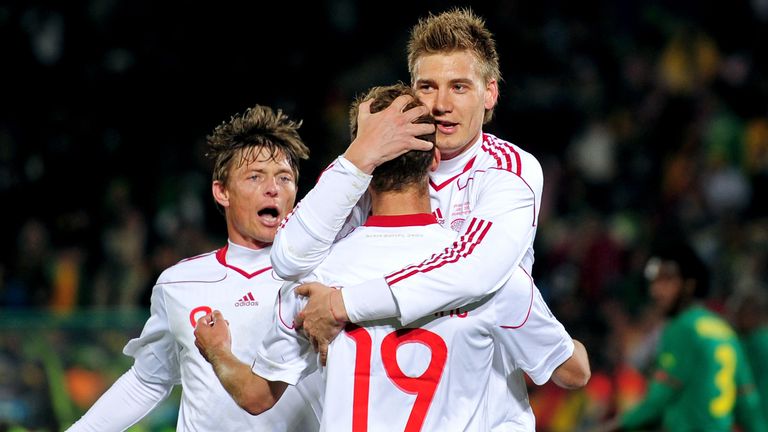 More often than not, his casino trips did not end so happily.

“I wish that it wasn’t something that I needed as much at that time,” he says. “But when I was injured it was the only thing that gave me the adrenaline I wasn’t getting on the pitch. The casino provided the excitement I needed and fulfilled the curiosity inside me.”

Bendtner was driven to alcohol and gambling by other factors too. In the book, he speaks of the pain of being unable to see his new-born son after separating from his fiancee. The close attention of the press, both in England and back home in Denmark, was not easy to get used to and nor was the constant pressure to perform.

“We all have our issues and our battles to fight,” he says. “Whether you are a professional footballer, whether you are a journalist, we all have things we go through. But obviously fans pay a lot of money to go to the stadium and they expect a performance without thinking much about it.

“As a player, you have to learn to deal with outside situations without bringing them onto the pitch. For some people, that can be more difficult. And the bigger the problem, the harder it gets. All the stuff away from football, the stuff that people don’t know about, can pull you in different directions.

“It’s even more difficult for players now,” Bendtner adds. “When I was a young player, it was just the beginning of Twitter and Instagram and all these social media things, so I didn’t get the full attention as it is now, where you really can get bullied online, your belief in yourself can get really low and you can feel self-doubt.

“I’m sure there are many players struggling with the things I struggled with. They might not have spoken about it publicly as much as I have now, but I hope if they read my book or they see something about it, then it could be an inspiration to them because it is something most people do get out of.”

It was only after hitting what he describes as “rock bottom”, however, that Bendtner was able to get out of it himself, the termination of his contract at Wolfsburg in 2016 sending him into a self-destructive period of depression which didn’t subside until he joined Norwegian side Rosenborg in the following year.

“They were focused not just on giving me football back but also giving me a chance to become the person I wanted to be,” he says. “That was a big turning point for me, being able to live in the mountains, in northern Norway, away from everything. 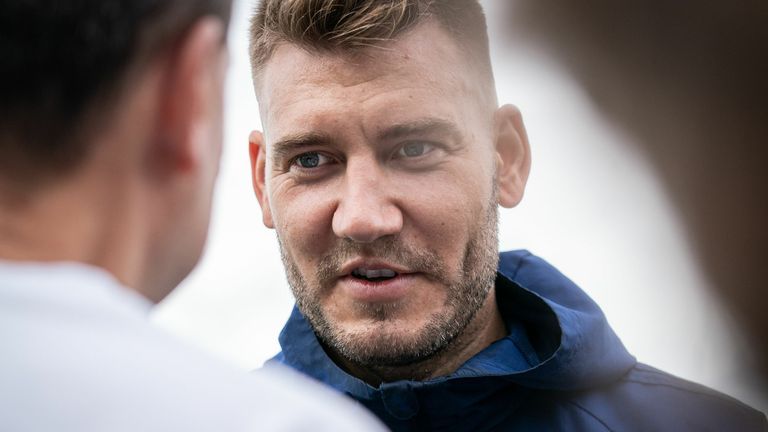 “It was really special and it’s probably what I’m most proud of, becoming me again and getting true values back into my life.”

Bendtner spent two seasons with Rosenborg, rolling back the years with 23 goals in 44 games in the first of them, and going on to have a brief spell with FC Copenhagen afterwards. But he is without a club now – “I’m just enjoying football with my friends,” he says – and preparing to pursue a career in coaching.

“I’ve signed up to do my coaching badges in December,” he says. “So, I’m planning on staying in football, if not as a player, then maybe as a manager.”

It is certainly an intriguing prospect, the wild, young striker who turned his life around then turned his hand to management.

“It’s very exciting,” says Bendtner, smiling again. “I’ve been very lucky to have been coached by some of the greatest managers around, so if I’m ever in doubt or I want to talk about something related to coaching, I have a few numbers in my phonebook I can call.”

He has a few stories he can tell too. And plenty of lessons to pass on.

Mesut Ozil: Saga over Arsenal future to drag into next season?

Arsenal have Alexandre Lacazette problem likely to prompt Aubameyang role change
Man Utd boss Ole Gunnar Solskjaer is copying Sir Alex Ferguson tactic to avoid sacking
Best News
Recent Posts
This website uses cookies to improve your user experience and to provide you with advertisements that are relevant to your interests. By continuing to browse the site you are agreeing to our use of cookies.Ok