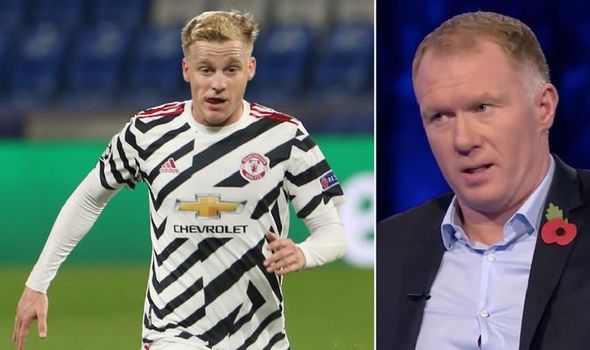 Paul Scholes felt Donny van de Beek “kept the ball well” but was not as active in the final third as expected in Manchester United’s Champions League defeat to Istanbul Basaksehir on Wednesday night. Van de Beek made just his fourth start since a summer switch from Ajax but lasted only an hour.

The Dutchman started in a two-man midfield with Nemanja Matic with Bruno Fernandes starting in the No 10 role ahead of them.

But the 23-year-old was hooked for Paul Pogba on the hour mark with United trailing 2-1 after goals from Demba Ba and Edin Visca put the hosts in control before Anthony Martial halved the deficit.

The Red Devils were unable to force an equaliser in Turkey and slumped to a miserable defeat, having won their previous two Group H games against Paris Saint-Germain and RB Leipzig.

And legendary former United midfielder Scholes, assessing the match on BT Sport, did not rate Van de Beek’s performance was anything more than mediocre. 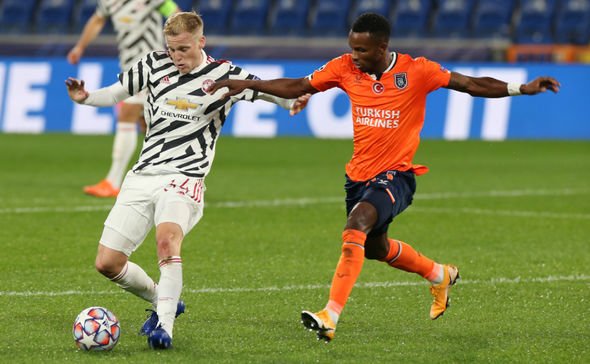 “I thought he [Van de Beek] was alright, kept the ball well I suppose. Passed it well,” he said.

“Didn’t really get involved in the final third as much as you would have liked.”

Discussing United’s result, Van de Beek told BT Sport post-match: “I’m really disappointed. I think we started OK, the first 10 minutes, then we give a goal away. I don’t know how.

Asked if he thought Martial’s goal prior to half time might be a turning point, Van de Beek added: “Yes I had that feeling. There was also a lot space to play and create something.

“But I think today we create not many chances. We are Man United. We need to improve. The games before, like last game against Arsenal was the same. I think we don’t play our best game. Now we have to step up [for] the game against Everton.”

Scholes, meanwhile, was particularly disappointed with the performance of Van de Beek’s replacement Pogba and also that of goalscorer Martial.

“I think there was an element of commitment. I just think the quality was so bad,” he continued.

“The amount of times they gave the ball away, bad decisions, trying to beat a man.

“Paul Pogba when he came on, he was trying to beat a man, hold people off instead of passing the ball and keep it moving.

“The movement from the centre forwards was non-existent. Anthony Martial, the amount of times I looked up when a midfield player had the ball, he was just stood between the two centre-halves doing nothing.

“It was just a real lack of quality. I’m trying to find a reason, excuse for it. But at the end of the day they were in good positions but the final bit of quality was really, really lacking.”

United were caught cold on the counter-attack from their own short corner for Istanbul’s opening goal after just 12 minutes, as Ba raced into the Red Devils’ half without a single player to beat. 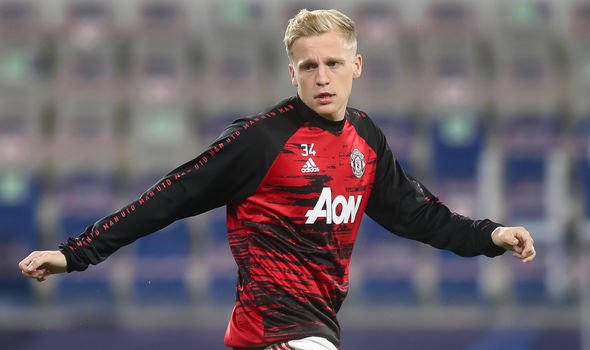 “Normally before a game you have your set pieces, you’ll have your man who should be back on the halfway line for corners.

“They’ve got nobody within 20 yards of their centre-forward. We did see on the video Mike Phelan was trying to organise, trying to get people there. It just didn’t happen.

“Dean Henderson, he should be able to see that as well. Matic, a man of his experience, you’re telling me he can’t see that man 20 yards behind him?

“Why would you leave him when Matic can’t run anyway. He’s got 20 yards to make up on him. There’s no way, never in a million years is he going to get there.”

Jose Mourinho: Tottenham boss insists he has 'more emotional control'
Dejphon Chansiri: Sheffield Wednesday owner on state of football and points deduction
Best News
Recent Posts
This website uses cookies to improve your user experience and to provide you with advertisements that are relevant to your interests. By continuing to browse the site you are agreeing to our use of cookies.Ok