The Professional Footballers’ Association (PFA) have called on the government and the police to crack down on social media companies after Crystal Palace footballer Wilfried Zaha and Sheffield United’s David McGoldrick were racially abused on social media.

Zaha revealed that he had been subjected to a series of vile messages before Palace’s game against Aston Villa on Sunday, which included a picture of a Ku Klux Klan gathering.

West Midlands Police later confirmed a 12-year-old from Solihull had been taken into custody on Sunday afternoon. Yet just days later Sheffield United forward McGoldrick became the recipient of similarly vile abuse, with a random message on Instagram calling him a f****** dirty n*****. 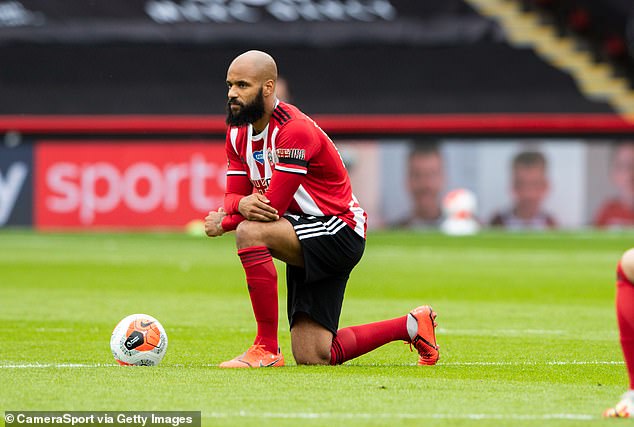 Sheffield United striker David McGoldrick has become the latest player to be racially abused on social media, after receiving vile threats just a day after Wilfried Zaha was also victim 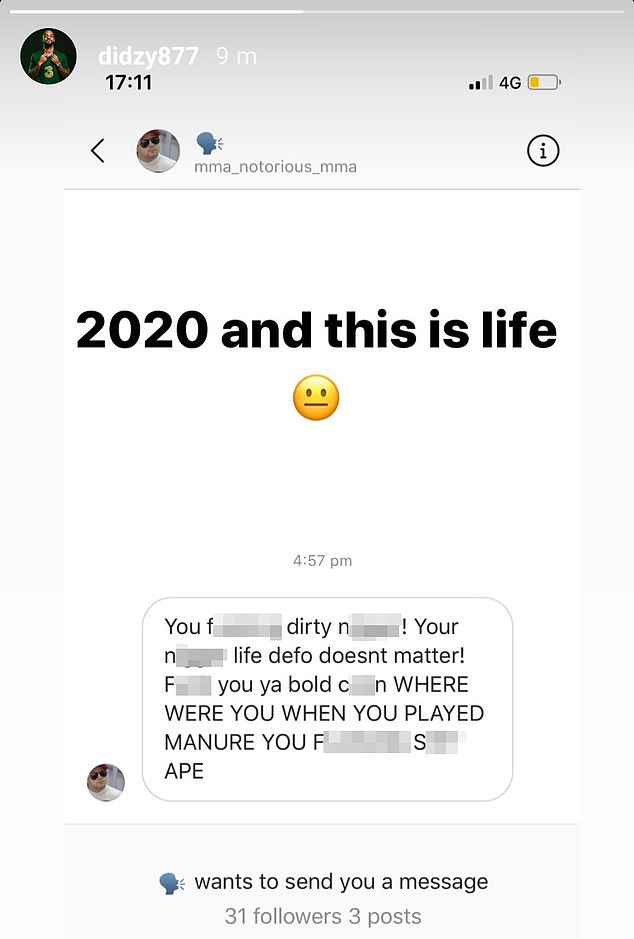 McGoldrick revealed the sickening racist abuse he was sent on Instagram this week, taking a screenshot of the message and simply adding: ‘2020 and this is life’

McGoldrick shared a screenshot of the racist abuse with a simple added message reading: ‘2020 and this is life.’

Now the PFA and Kick It Out have called for concerted government and police action to tackle the wider issue of how people can anonymously post such abuse.

The PFA, which is the trade union for professional footballers in England and Wales, now wants Ofcom to oversee the enforcement of legislation. Kick It Out, which is football’s equality and inclusion organisation, said that social media had been allowed to become like the ‘wild west’.

In a statement, the PFA described the posts which were sent to Zaha as ‘sickening and abhorrent’ and said that players were still the ‘relentless’ targets for online abuse.

Days earlier Wilfried Zaha was sent a series of disgusting images and two messages ahead of his game at Villa Park. Police have since confirmed a 12-year-old has been arrested 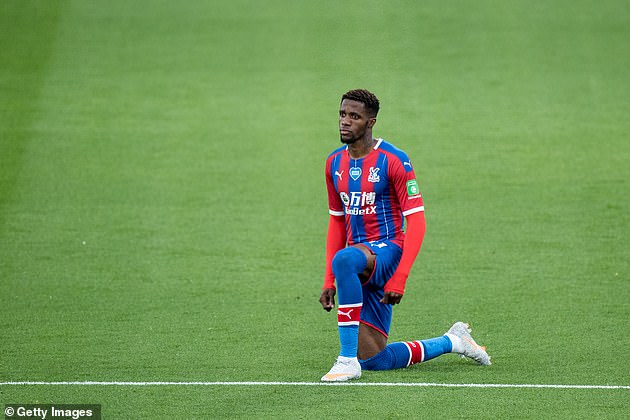 ‘Incidents, such as this, only strengthen the case for tighter regulation of social media companies,’ said the PFA.

‘We call on the authorities to accelerate the process of appointing Ofcom as the regulator to oversee the Online Harms legislation.’

Sanjay Bhandari, the chair of Kick It Out, said that the sort of messages which Zaha received were no longer even a surprise. ‘This kind of disgusting targeted racist abuse has become normalised on social media,’ he said.

‘Twitter, Facebook and Instagram are like the Wild West. To address this we need social media companies to do more. We also need a concerted and sustained effort between government, law enforcement and the football authorities to prioritise the gathering of evidence and prosecution of online hate.

‘We need to show the online haters that they will be tracked and that there are consequences for their actions. At the moment, they act with complete impunity.’

A new online system to allow Premier League players to report abuse has also been launched while Prime Minister Boris Johnson has said previously that his government will ‘ensure that the UK is the safest place to be online’.

La Liga chief Tebas furious as Man City succeed in European ban appeal
‘It happens every day’ – Zaha responds after 12-year-old arrested for racially abusing Crystal Palace star
Best News
Recent Posts
This website uses cookies to improve your user experience and to provide you with advertisements that are relevant to your interests. By continuing to browse the site you are agreeing to our use of cookies.Ok