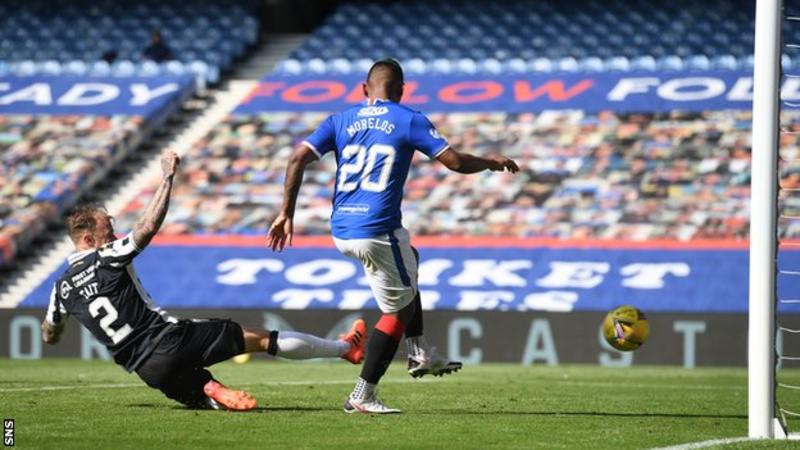 Alfredo Morelos scored his first goals since February as Rangers eased past St Mirren to make it two Scottish Premiership wins out of two.

The Colombian headed Rangers’ second after Conor McCarthy’s first-half own goal and made it 3-0 with a tap-in.

Striker Cedric Itten made his debut late on as the Ibrox side dominated in the Glasgow sunshine.

Morelos started despite the midweek signings of Itten and Kemar Roofe, the latter not in the squad, with manager Steven Gerrard saying last season’s top scorer had had his head turned by speculation linking him with Lille.

But the 24-year-old recaptured the form of his first three seasons at the club with a powerful header to convert Tavernier’s corner and then a close-range finish after Borna Barisic had crossed from the left.

He may have netted earlier had it not been for Alnwick, who also foiled Joe Aribo and stretched to beat away two shots by Tavernier.

St Mirren struggled to get out of their own half but gave the home side a worrying period early in the second half when debutant McLaughlin missed a cross and had to recover with a save off Jamie McGrath’s shot, with the Scotland cap then holding a fierce Durmus free-kick.

What did we learn?

While the transfer window remains open, it is likely Morelos will continue to be linked with a move away from Ibrox after scoring 79 goals since he arrived in 2017.

However, this performance showed he can still be an asset to Rangers.

Gerrard’s side had nearly three-quarters of the possession, 29 shots in total and 12 on target, building on the superiority they enjoyed at Aberdeen last weekend.

St Mirren got their season off to a winning start last week against Livingston and Alnwick’s performance will give the Paisley side confidence they have a reliable last line of defence this season.

However, Jon Obika was very isolated in attack and needs more support in matches where St Mirren are going to be under the cosh.

Man of the match – Alfredo Morelos

St Mirren host Celtic in Wednesday’s 18:00 BST kick-off before Rangers take on St Johnstone at Ibrox later that day at 19:45.

By then Rangers, who were knocked out of the 2019-20 Europa League by Bayer Leverkusen on Thursday, will have featured in the second qualifying draw for this season’s tournament.

Attempt missed. Steven Davis (Rangers) right footed shot from outside the box is close, but misses to the right.

Attempt saved. Calvin Bassey (Rangers) right footed shot from the centre of the box is saved in the bottom left corner. Assisted by Scott Arfield.

Attempt missed. Cameron MacPherson (St. Mirren) right footed shot from outside the box is close, but misses to the left from a direct free kick.

Jamie McGrath (St. Mirren) wins a free kick in the attacking half.

Attempt missed. Leon Balogun (Rangers) header from the centre of the box is too high following a corner.

Joe Shaughnessy (St. Mirren) wins a free kick in the defensive half.

From Leicester to Chelsea…here are the best scouting success stories
Graeme Souness highlights drought which will be ‘eating away’ at Pep Guardiola
Best News
Recent Posts
This website uses cookies to improve your user experience and to provide you with advertisements that are relevant to your interests. By continuing to browse the site you are agreeing to our use of cookies.Ok