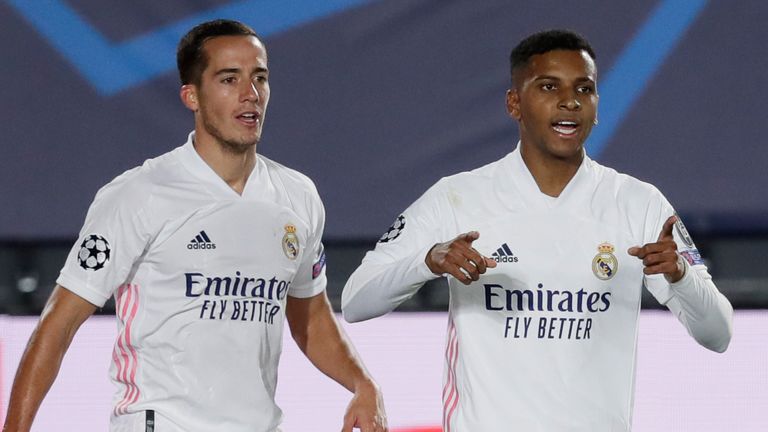 Real Madrid boosted their chances of reaching the Champions League knockout stages after a late winner by substitute Rodrygo gave them a 3-2 home victory over Inter Milan in an absorbing Group B clash on Tuesday.

The result left Real, winners of a record 13 titles in Europe’s premier club competition, level on four points with Shakhtar Donetsk, one point behind leaders Borussia Moenchengladbach and two ahead of bottom-placed Inter.

Real had thrown away a two-goal lead and were flirting with a defeat which would have piled more pressure on manager Zinedine Zidane before their Brazilian duo of Vinicius Junior and Rodrygo combined to save the day.

Chances had gone begging at either end before Karim Benzema gave the home side a 25th-minute lead, rounding goalkeeper Samir Handanovic and slotting home after intercepting a dreadful back pass by Real’s former wing-back Achraf Hakimi. The hosts seemed to be cruising after 33 minutes when Sergio Ramos headed their second – his 100th goal for the club in all competitions – but Lautaro Martinez pulled one back for Inter two minutes later thanks to a sublime assist by Nicolo Barella.

Real were rattled when Ivan Perisic equalised midway through the second half, threading a shot into the far corner from close range after Martinez headed the ball into the Croatian’s stride.

Inter then missed a pair of gilt-edged chances as Martinez shaved the outside of the post with a shot from the edge of the area and Perisic fired wide, with Real’s defence in tatters. 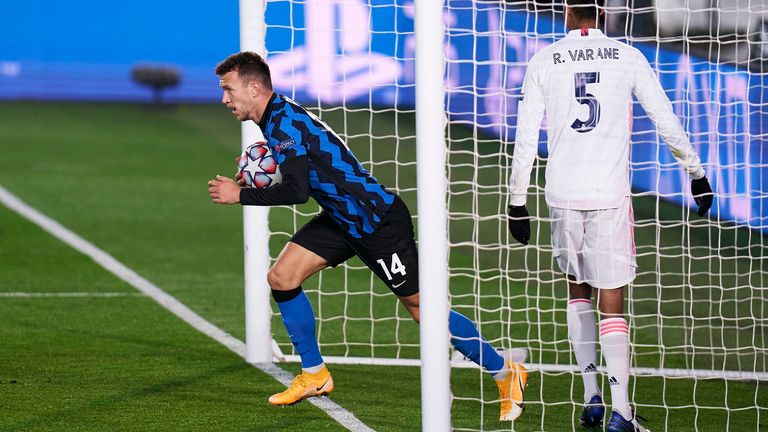 The Italians were punished for their misses, however, as Vinicius Junior and Rodrygo, brought into the fray together by Zidane shortly before Inter’s equaliser, carved out the winner from a lightning-fast break.

Vinicius Junior raced clear of his marker down the left flank and squared the ball back to Rodrygo, who beat Handanovic with an unstoppable shot into the top corner from 10 metres.

Inter are now under pressure halfway through the group stage to turn their fortunes around and will hope to have striker Romelu Lukaku back for the reverse fixture on November 25 after the Belgium striker missed the match with a thigh injury. This was described beforehand as a cup final for both sides – and it didn’t disappoint for drama. Real were bottom heading into this. And in their history, they have never failed to progress from Champions League group stages.

Zidane’s side had gone four games without a win in the competition, but it appeared they would end that run with relative ease when Ramos doubled the hosts’ lead after 33 minutes. Things are never straightforward these days for Real, however, as they nearly snatched a draw from the jaws of victory.

Inter roared back through Martinez and Perisic to level, but then Real’s two substitutes combined for a rousing winner. For Vinicius, it was a moment of redemption, a week on from being apparently alienated by his team-mate Karim Benzema.

Benzema was caught on camera telling Ferland Mendy not to pass to the Brazilian during the 2-2 draw with Monchengladbach, but it was his assist which enabled Rodrygo to steer home. Zidane showed his managerial acumen.

League One highlights and round-up: Peterborough move three clear
Jurgen Klopp: No selection headache with Diogo Jota or Roberto Firmino
Best News
Recent Posts
This website uses cookies to improve your user experience and to provide you with advertisements that are relevant to your interests. By continuing to browse the site you are agreeing to our use of cookies.Ok