Manchester United legend Rio Ferdinand does not want Liverpool to be crowned Premier League champions tonight because it would hinder his former side. Liverpool will be league champions if Manchester City drop points at Chelsea. However, Chelsea are direct rivals with Ferdinand’s former side United for the Champions League qualification spots.

United’s 3-0 win over Sheffield United on Wednesday took Ole Gunnar Solskjaer’s side within two points of Chelsea in fourth.

Humphrey said: “Focusing on tonight, I wonder whether with your Manchester United hat on you’re thinking if Chelsea lose this that’s good for United and it delays Liverpool winning the league.”

And Ferdinand made it clear he wanted City to come out on top over Chelsea. 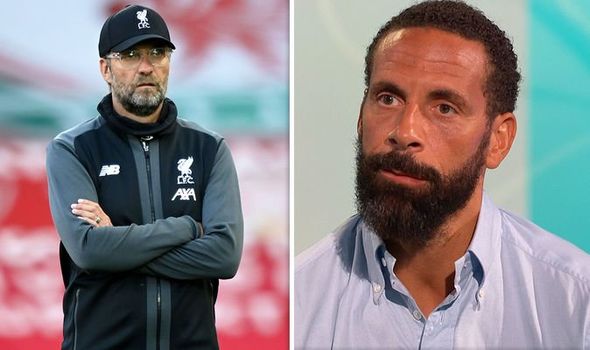 “Listen, I obviously want the result to go the way that means Man United are closer to Chelsea.”

Ferdinand also thought it was a big night for a number of Frank Lampard’s Chelsea squad.

“I think looking more importantly at this game as a whole for the Chelsea players more and more it’s an audition for next season,” he added.

“Frank will be looking at each and every individual and thinking ‘are you good enough for next season to elevate us to the level that I want?’.

“Frank’s very determined, he’s got big ambitions, he wants to do well and these players, he’s looking to see who he can take on to actually challenge.”

Earlier, Ferdinand said he expects Chelsea to challenge for the title next season but hopes United can too.

“Yeah [Lampard will] want to be right up there competing and the signings he made, Timo Werner, [Hakim] Ziyech as well, they’re fantastic signings who were courted by other teams as well,” the pundit said.

“That’s the big important factor there, that Frank’s got them over the line.

“He’s someone who’s competitive, he’s got a competitive spirit from a young age.

“His main aim next season will be to push this team on.

“Champions League this year and then push on to be fighting [Pep Guardiola] and Jurgen Klopp and hopefully someone like Ole Gunnar Solskjaer next year for the title.”

Legends blow up over ‘choke hold’

Barcelona transfer completed: Club set to announce Arthur and Miralem Pjanic swap deal
Liverpool make Adama Traore transfer offer as Jurgen Klopp chases Wolves winger
Best News
Recent Posts
This website uses cookies to improve your user experience and to provide you with advertisements that are relevant to your interests. By continuing to browse the site you are agreeing to our use of cookies.Ok