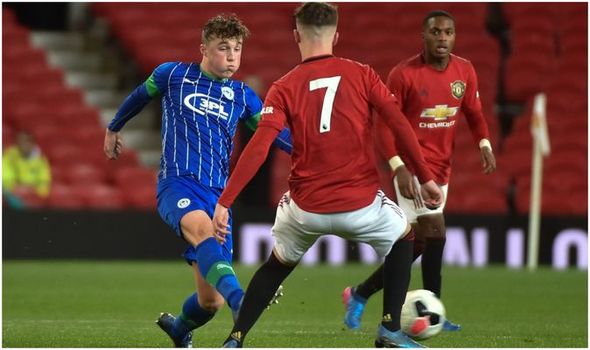 The 15-year-old midfielder will link up with Spurs’ academy team after joining for a fee worth up to £500,000.

He starred for Wigan’s record-breaking Under-18 team and trained with Paul Cook’s senior squad this season.

Tottenham are believed to have seen off competition from Leeds United and Celtic.

A statement from the Latics said: “Wigan Athletic midfielder Alfie Devine has completed a permanent transfer for Premier League side Tottenham Hotspur.

“Devine, 15, has starred for England’s Under-16 side on the international stage and was part of Latics’ record-breaking U18s this season as Peter Murphy’s side reached the quarter-finals of the FA Youth Cup for the first time in the club’s history.

“We wish Alfie well in his future career.”]

Devine is the second rising star to leave Wigan after Jensen Weir was sold to Brighton and Hove Albion last week.

Wigan are being forced to sell off their assets after entering administration earlier this month.

They suffered relegation from the Championship after being hit with a 12-point deduction by the EFL. The club’s appeal against the punishment will be heard on Friday.

The fairytale story of Granada saw them achieve European football
Man Utd boss Solskjaer backed to target centre-back transfer because of three players
Best News
Recent Posts
This website uses cookies to improve your user experience and to provide you with advertisements that are relevant to your interests. By continuing to browse the site you are agreeing to our use of cookies.Ok