Tottenham tore apart Manchester United for a 6-1 victory on Sunday, exposing the defensive weaknesses in Ole Gunnar Solskjær’s side by inflicting the team's joint-heaviest Premier League defeat at home. 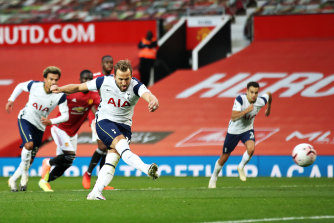 Only once since 1930 has United conceded six at home – to Manchester City nine years ago. Not since 1986 has United opened the league season with back-to-back home losses.

This was a crushing defeat to a Tottenham side managed by Jose Mourinho, who was fired in 2018 to make way for Solskjær. And against a team that has played eight games in 22 days across three competitions and was trailing after two minutes at Old Trafford.

But after Bruno Fernandes’ penalty, United’s wretched defence allowed Tanguy Ndombele to level in the fourth minute and Son Heung-Min to net again inside three minutes.

United can be aggrieved that Erik Lamela’s apparent playacting led to Anthony Martial being sent off in the 28th minute. But the team was already being run ragged by Tottenham.

Harry Kane scored his first on the half-hour, Son netted again in the 37th, Serge Aurier was on target in the 51st and Kane wrapped up the rout from the penalty spot in the 79th.

With their manager David Moyes absent after testing positive for coronavirus, the Hammers produced a breathtaking performance under his assistant Alan Irvine in their first away league win of the season.

The result provisionally left Leicester second in the standings on nine points from four games while the Hammers briefly climbed to sixth on six points ahead of the afternoon fixtures.

Following their impressive 5-2 win at Manchester City a week ago, Leicester were brought crashing down to earth against the visitors, who could have won by a bigger margin.

Antonio said West Ham were reaping the rewards of their counter-attacking strategy engineered by Moyes and his backroom staff.

"We’ve come out and in the last few games we’ve played well, even in the games that we’ve lost," the 30-year old forward told West Ham's official website.

Antonio headed West Ham into a 14th-minute lead as he rose at the far post to meet a long Aaron Cresswell cross and steer the ball into the opposite corner.

Fornals made it 2-0 in the 34th when he took a lofted pass in his stride and beat home goalkeeper Kasper Schmeichel with a left-footed shot from eight metres after holding off two defenders.

Declan Rice hit the underside of the bar for West Ham after a darting solo run from inside his own half before Bowen put the icing on the cake with a clinical finish in the 83rd minute, courtesy of a defence-splitting pass by Fornals.

The home side's miserable afternoon was summed up when Jamie Vardy missed a 90th-minute sitter before Harvey Barnes had a stoppage time goal scrapped by VAR after a one-two with Vardy who was marginally offside.

Pedro Neto scored the only goal as Wolverhampton condemned Fulham to another Premier League defeat.

The forward’s strike earned the hosts a 1-0 win as Nuno Espirito Santo’s side rediscovered its form.

Alphonse Areola’s double save denied Neto and Nelson Semedo, while Aboubakar Kamara missed a great chance to level for the visitors.

It meant Fulham slipped to a fourth straight loss to remain bottom of the Premier League.

Despite a tireless display, it has been a chastening return to the top flight for Scott Parker’s side, which has let in 11 goals so far — the highest number it has conceded in the opening four league games since 1960.

Wolves, smarting from their recent loss of form, were cautious but still had too much for Fulham to end its run of three straight defeats.

United States defender Antonee Robinson made his league debut for Fulham and the left back tested Wolverhampton goalkeeper Rui Patricio early on after a strong run.

Wolves broke through 11 minutes after the interval when Leander Dendoncker’s shot was blocked by Robinson. As Fulham failed to clear, the ball ricocheted to Neto, who drilled into the bottom corner from 16 yards.

Bukayo Saka and Nicolas Pepe scored within three minutes of each other to give Arsenal a 2-1 win and leave Sheffield United without a point so far this season.

Arsenal broke the deadlock in the 61st minute when Mohamed Elneny burst into the box and found Pierre-Emerick Aubameyang, whose ball in to Hector Bellerin saw the fullback cross for Saka to head home at the back post.

Bellerin was again the provider for the second as he slipped the ball through to Pepe. The Ivory Coast forward broke into the box unchallenged and fired low past Aaron Ramsdale for his first goal since he turned home a penalty in the 2-1 FA Cup quarter-final win against Sheffield United in June.

As is often the case with Arsenal, things were not all plain sailing as David McGoldrick curled in a late fine goal from 20 yards to claim Sheffield United’s first league goal of the season.

But the Blades could not find a way to pick up their first points of the campaign after four games.

Southampton beat an insipid West Bromwich Albion 2-0 with goals either side of halftime from Moussa Djenepo and Oriol Romeu at St Mary's Stadium to leave the visitors in danger of dropping into the relegation zone.

Southampton's second consecutive win and clean sheet moved them up to 10th in the standings while winless West Brom remained in 17th place with a point after four games, with the bottom teams having a game in hand.

Southampton had a couple of chances to take an early lead but goalkeeper Sam Johnstone stood strong to make reflex saves to deny Ryan Bertrand, Stuart Armstrong and a Che Adams strike from close range inside the first 15 minutes.

But Johnstone could do nothing when Moussa Djenepo received the ball in the box and executed a sharp turn to shrug off two defenders and fire a low shot into the bottom corner, giving the home side the lead four minutes before the break.

Romeu then produced a stunner with 20 minutes to play when he leapt into the air to latch on to an Armstrong cross, firing home a thunderous volley for his first goal in 50 games for the club.

"I'm not used to hitting the ball that well," Romeu said. "I had space when the ball came to me and it ended up in the back of the net. Happy for the team and on we go, feeling good."

Boca Juniors will field players who tested POSITIVE for coronavirus

Man City aim dig at Man Utd on Twitter seconds after Tottenham secure 6-1 win
Manchester United’s shambolic defeat brutally exposes Ole Gunnar Solskjaer’s shortcomings
Best News
Recent Posts
This website uses cookies to improve your user experience and to provide you with advertisements that are relevant to your interests. By continuing to browse the site you are agreeing to our use of cookies.Ok