Tottenham Hotspur earned a drab 1-0 win over a lifeless Everton in the Premier League on Monday night.

Spurs had the better of the opening exchanges but it was a slow and uneventful match until Harry Kane bundled the ball toward Giovani Lo Celso and he spun to shoot, with the ball deflecting in off Michael Keane.

Despite a flurry of changes from both teams, quality on the ball and chances in front of goal were at a premium.

Everton barely threatened at all until late on and a couple of Anthony Gordon efforts, easily held by Hugo Lloris, was the sum total of their efforts.

Here are five things we learned from the game at Tottenham Hotspur Stadium.

It was the most upbeat, interest-inducing moment of the first half, and it occurred after the whistle went.

Spurs captain Hugo Lloris was incensed that, in the build-up to a Richarlison shot for Everton just seconds before half-time, Son Heung-min had strolled past a challenge after possession was lost and then didn’t chase back.

The South Korean forward didn’t react well and the two went, pushing and shouting at each other, into the tunnel having to be separated by team-mates.

If viewers had hoped it would spark the game into a more lively encounter after the restart, they were sadly disappointed 15 minutes later. 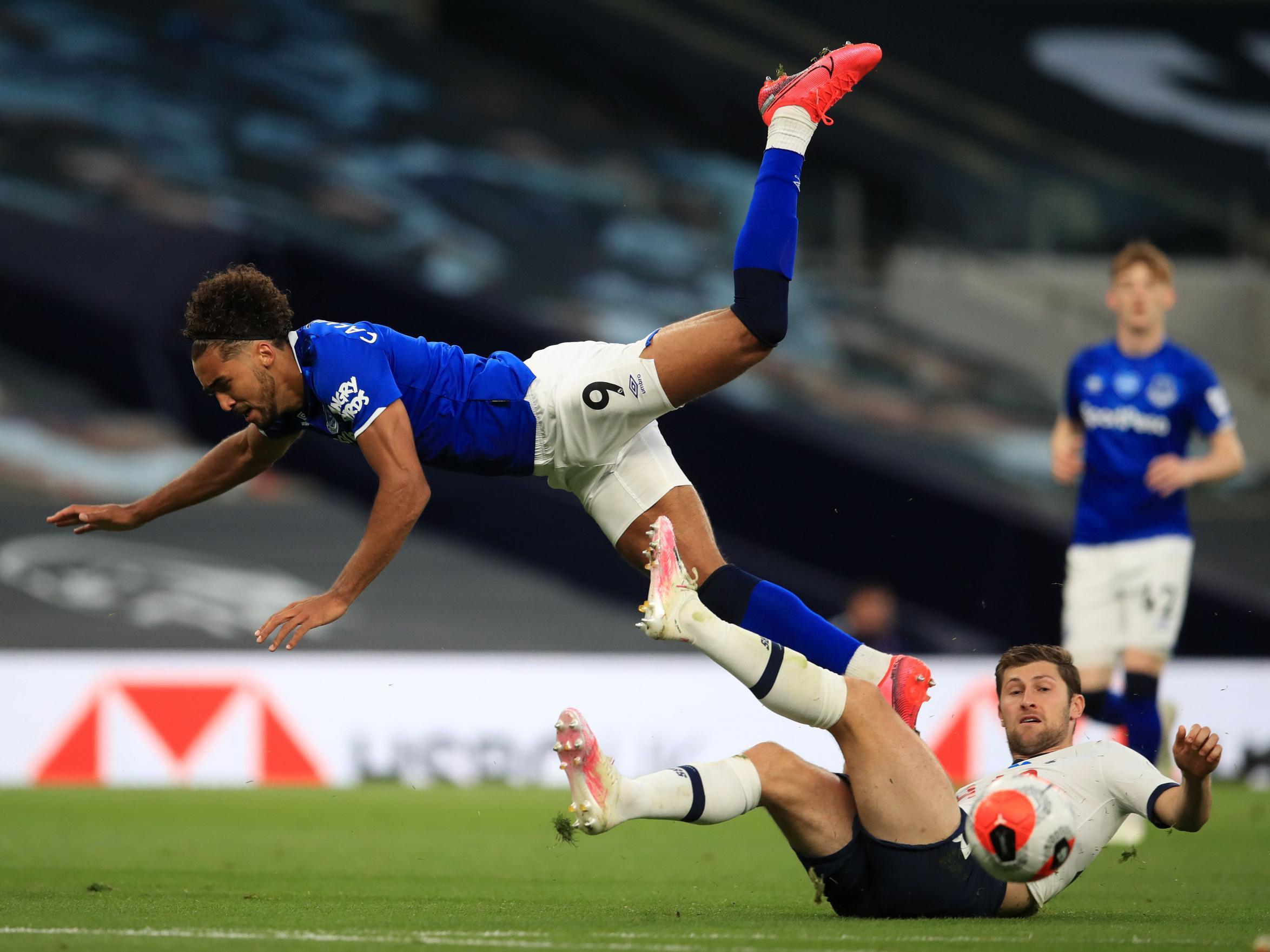 There was an awful lot of walking-pace passing and build-up play going on at times on Monday night.

Whether it was the fact that both teams have had to play a number of games in two weeks or so since the restart, or the fact neither have found consistency and thus have limited objectives to play for this season, there was a distinctly pre-season type of feel to the match at some stages.

Neither team had any tempo in their attacking passing; neither showed any great invention on the ball or impressive combination play in the final third.

If the prevailing train of thought is that both managers are, to an extent at least, trialling the squad to see who they take forward with them in their summer rebuilds, the list of ‘who to keep’ would be short indeed on the evidence of this 90 minutes. One of the worst games since the Premier League returned.

Jose Mourinho vociferously defended his record of coaching strikers recently and with the England No. 9 at his disposal, he’ll hope to have a regular source of goals at Tottenham.

The striker is still clearly chasing full fitness though, after several months out injured and recuperating ahead of the league’s resumption last month.

He didn’t have a single sniff of goal all night here, though some of his play in leading counter-attacks was good: a clever outside-of-the-boot pass to Son in the first half, a backward header in the second.

Kane’s awareness remains undiminished and he does already have a couple of goals, but the fluency in his game is nowhere near its peak right now, nor his ability to fashion chances for himself out of nothing.

Perhaps that will come in time to see him start next season in far more potent form, but for now he’s far less of a mobile, furthest-forward threat and rather more of a conduit of play for his team with runners from deep looking to get beyond him.

No inspiration, no perspiration either 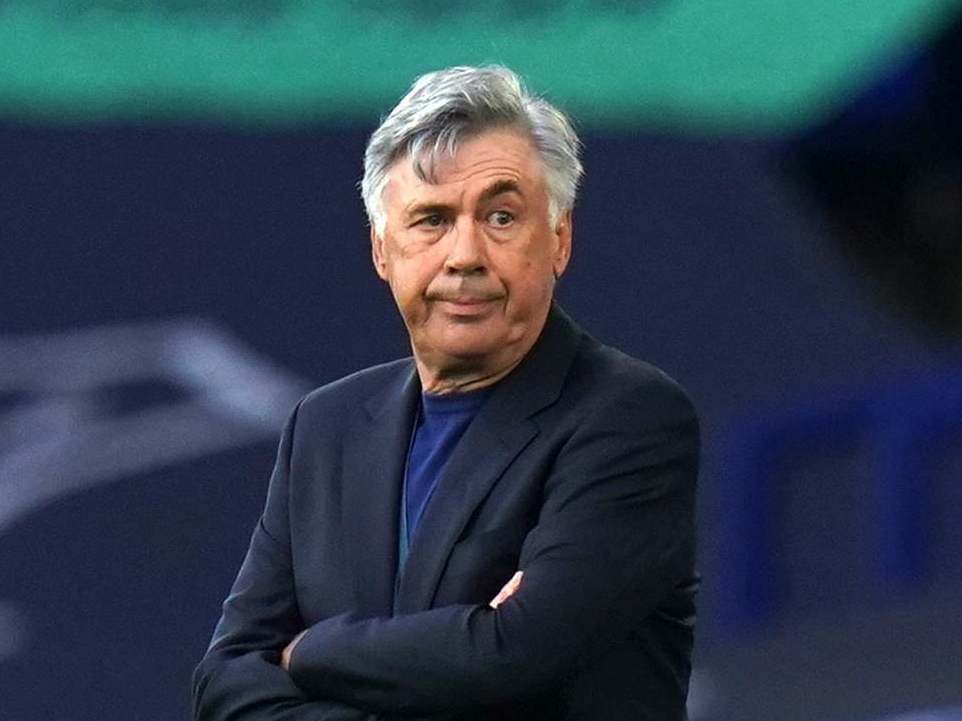 Carlo Ancelotti has a lot of work to do, as was made abundantly clear by this abject Everton performance.

Points and wins have come in fits and spurts since the Italian took over, but this type of inert display, lacking invention, has been seen all too regularly.

The manager made a couple of alterations to the tactical set-up with his shifting midfield, perhaps to stymie Spurs’ build-up play through the centre, but it offered nothing in the final third in terms of movement, sharp passing or direct routes to goal.

Whether the players or the system were at fault on the night—and the lack of hard running off the ball, determination and bravery in possession would suggest the former—Ancelotti needs to find the answers if he is to take his side beyond merely a top-half finish.

Given they were in the Champions League final only just over a year ago, Spurs cannot be happy at the extent they have fallen in such a short period of time.

But with this three points, they do at least stay in the hunt for a Europa League spot, being again level on points with Sheffield United and one behind Arsenal.

Mourinho used the lack of attackers prior to lockdown as a key reason for Spurs’ dismal form; he has them all back now and it’s two wins from four, but still with a lethargic and painful-to-watch style of play.

Still, there are enough inconsistencies in the teams around them that they could grind their way through to a seventh-place finish, giving at least a platform to build from and extra games in Europe to implement the manager’s style in next season.

Guendouzi 'EXILED from Arsenal training since Brighton defeat'
Chris Wilder accuses Mikel Arteta of turning drinks break into coaching session
Best News
Recent Posts
This website uses cookies to improve your user experience and to provide you with advertisements that are relevant to your interests. By continuing to browse the site you are agreeing to our use of cookies.Ok