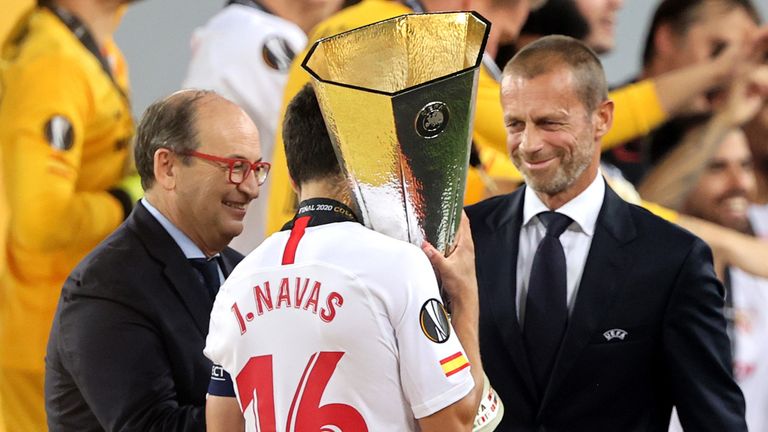 UEFA president Aleksander Ceferin has praised the “determination and belief” of the European football community for restarting so many of its competitions amid the coronavirus pandemic.

The Slovenian was speaking at the opening of the 24th general assembly of the European Club Association (ECA), which was being staged as a virtual event due to the Covid-19 crisis.

Many top-flight domestic leagues across Europe, including in England, Germany, Italy and Spain, were able to be completed in the summer after their suspension in March, in large part thanks to the early decision by UEFA to postpone Euro 2020 until next summer.

The men’s and women’s Champions League plus the men’s Europa League competitions were then played out as mini tournaments in Portugal, Spain and Germany respectively last month.

Ceferin said: “If this is no miracle, can I at least say I am proud of what we have achieved together. In this crazy period it took a lot of determination and belief to go ahead when everything was down and the outlook was not great, not promising at all.” He added: “We have been working since day one, hand in hand with the ECA and European Leagues, with one objective – put football back on track.

“None of us would have had enough fantasy to imagine a plot like the one we have been living, and are still living, this year.

“Who could imagine at the beginning of 2020 what we would have seen?

“If I had been sleeping for a few months and now waking up I would think I was in a movie. But I am not in a movie, we are not in a movie. A big storm ravaged the world. Six months ago everything was shutting down, and now my friends we are back.

“We cannot say everything is normal, but it will be normal soon.”

The Premier League announced on Monday it has received three positive tests in its first round of testing ahead of the new season.

“The Premier League can today confirm that between Monday 31 August and Sunday 6 September, 1,605 players and club staff were tested for COVID-19. Of these, there were three new positive tests,” a Premier League statement read.

“Players or club staff who have tested positive will self-isolate for a period of 10 days.”

Chelsea star N’Golo Kante makes transfer decision as Frank Lampard stance emerges
Man Utd board at loggerheads with Real Madrid over Sergio Reguilon transfer
Best News
Recent Posts
This website uses cookies to improve your user experience and to provide you with advertisements that are relevant to your interests. By continuing to browse the site you are agreeing to our use of cookies.Ok