Report from the Sky Bet Championship clash at Vicarage Road 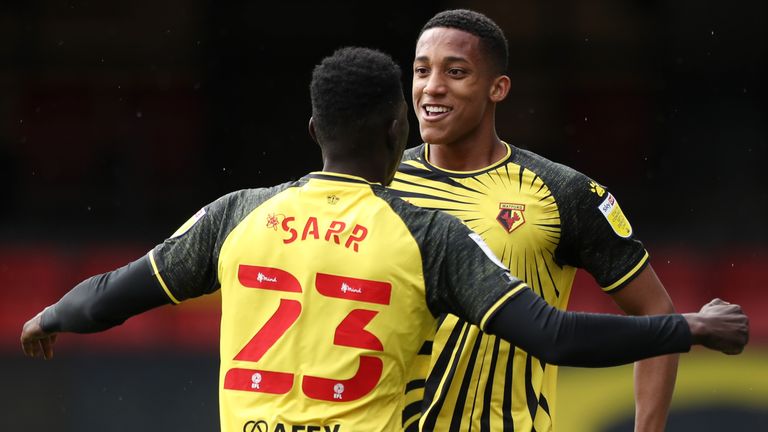 Joao Pedro celebrated his 19th birthday with the winning goal in a 1-0 victory for Watford over Luton in a game they should have won more comfortably.

The fixture between keen rivals had not been played since April 2006 but although the match was played behind closed doors, police still insisted on a 12.30pm kick-off.

As a result, there was little resembling a derby atmosphere in a cold and biting wind and Luton, in particular, struggled to raise their game against a Watford side whose recent Premier League pedigree gave them a decided edge.

Watford remain unbeaten with two victories and a draw from their three matches so far but they will be wondering how they did not win this game by a larger margin.

Luton manager Nathan Jones was an agitated figure on the touchline but could not get a response for his team, who went down tamely to their first league defeat of the season.

Luton goalkeeper Simon Sluga did well to prevent Watford taking the lead after 12 minutes, diving to his right to parry a low shot from Pedro after Luton left back Rhys Norrington-Davies had lost possession to Hornets captain Tom Cleverley.

The home side were having plenty of the ball, and Ismaila Sarr constantly drifted away from his markers into dangerous positions. Cleverley and Jeremy Ngakia had shots blocked and it seemed only a matter of time before Watford took the lead.

Instead, it was Luton who should have broken the deadlock after 33 minutes as Harry Cornick got free down the right and crossed low. James Collins met the ball first time but got underneath his shot and the ball cannoned back off the crossbar.

Almost immediately, Watford were ahead. Ken Sema made headway down the left and Matty Pearson was unable to cut out his low pass. Pedro had lost his marker and prodded home from six yards with the help of a deflection off a defender.

It should have been 2-0 early in the second half but Nathaniel Chalobah failed to make proper contact with a header from a 55th-minute corner by James Garner. Matty Pearson then blocked a shot from Pedro after Garner’s low shot had come back off Sluga.

Luton manager Nathan Jones tried to change things but Watford continued to dominate and Sluga came to his side’s rescue once again, plunging to his left to palm away a deflected shot from Watford substitute Tom Dele-Bashiru.

Gerrard left Morelos out of Rangers side due to transfer speculation

Ole Gunnar Solskjaer makes honest admission after Man Utd win over Brighton
Toon boss Steve Bruce is relieved his side will not face Gareth Bale
Best News
Recent Posts
This website uses cookies to improve your user experience and to provide you with advertisements that are relevant to your interests. By continuing to browse the site you are agreeing to our use of cookies.Ok