Chelsea flop Kepa Arrizabalaga appears to have an ally in the club’s hierarchy. The world’s most expensive goalkeeper has been heavily linked with a departure from Stamford Bridge.

Chelsea expected big things when they splashed £71.6million on Arrizabalaga in the summer of 2018 but the former Athletic Bilbao stopper has been a major disappointment.

The 25-year-old appears to have regressed in his sophomore campaign in the Premier League and his 54.5 per cent save ratio is statistically the worst in Europe’s top five leagues.

He faced a battle to win over Frank Lampard after being dropped for Willy Caballero in February – and his form since last month’s restart has been less than impressive.

Chelsea are considering a host of goalkeepers as Lampard looks for a new man to take the role between the sticks. 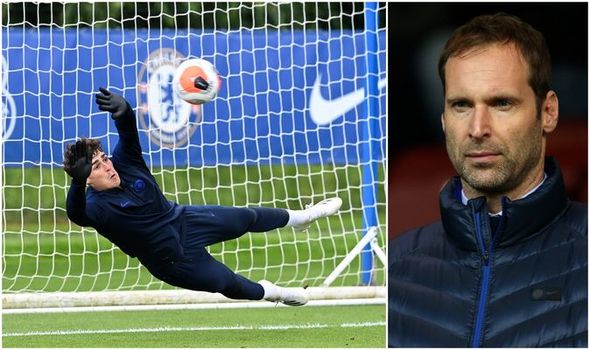 The Blues will need to offload Arrizabalaga to raise funds and get his wages off their books.

Stamford Bridge bigwigs do not appear to be singing from the same hymn sheet over selling the Spaniard, however.

According to Mundo Deportivo, technical director Petr Cech – who holds the club’s record for clean sheets – believes that Arrizabalaga is a good goalkeeper with plenty of potential that simply needs to build his confidence.

Cech has played an important role in Chelsea’s summer transfer business so his opinion will hold power in the corridors at Stamford Bridge.

It would, therefore, be surprising for the club to follow through with their plan to dump Arrizabalaga while the club legend is supporting his cause.

Chelsea would need to dig deep for a replacement, despite spending nearly £90million already.

The signings of Hakim Ziyech and Timo Werner have come from the money left over from Eden Hazard’s mega switch to Real Madrid last summer.

Chelsea transfer fixer Marina Granovskaia will need to start selling deadwood to raise funds for other signings in the pipeline such as Kai Havertz.

Arrizabalaga came under fire from Jamie Carragher after conceding five goals in the defeat at Liverpool, but when asked about the Anfield hero’s comments, Lampard said: “I don’t want to comment on other people’s comments about players because that is their opinion and they are very well positioned to have their opinions. I have to work behind the scenes with every position in the team.”

The £100 million match: Manchester United faces date with Champions League destiny
Jose Mourinho: The new Tottenham stadium can become a fortress
Best News
Recent Posts
This website uses cookies to improve your user experience and to provide you with advertisements that are relevant to your interests. By continuing to browse the site you are agreeing to our use of cookies.Ok