Mauricio Pochettino has given his view on where he will manage next with strong reports linking him to the Manchester United job. Ole Gunnar Solskjaer is coming under pressure with the Red Devils sitting 15th in the Premier League. Ed Woodward has long been a fan of Pochettino but his efforts to hire him in the past had been knocked back by Tottenham.

Mauricio Pochettino admitted he is contemplating his next move amid strong links to Manchester United.

But amid the coronavirus pandemic, he has also stated that taking on a new job in the current predicament has made his situation unclear.

The Argentine has been without a club after being sacked by Tottenham last November.

A poor start to the season cost him his job after five years in north London where he took Spurs to the Champions League final just months before. 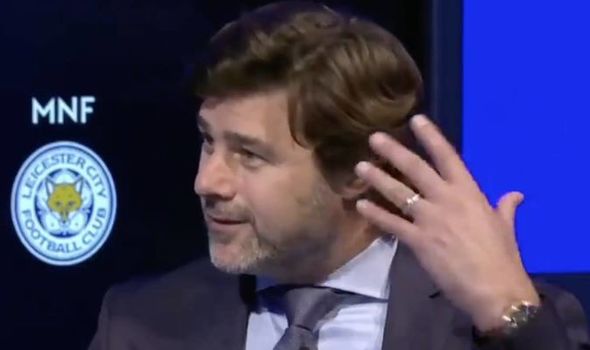 Despite his departure, his stock remains as high as ever with clubs all over the continent linked with him.

There are a few teams in a spot of peril, including Spain’s pair of giants Real Madrid and Barcelona.

While in England, United remain the favourites to land the Murphy-born tactician.

But he also has his admirers at the likes of Chelsea and Manchester City, where Roman Abramovich is a huge fan while Pep Guardiola’s contract expires next summer.

Pochettino made a guest appearance on Sky Sports’ Monday Night Football and Jamie Carragher and Dave Jones had one main concern – where will he manage next?

When asked if he is eyeing a job in the Premier League, he said: “I don’t know. I’m not going to close any door.

“I learned always, when I was really young, that football is going to dictate your way. I’m waiting to feel what is the right project for us, which is the right way to take.

“Of course, we’re living in a very crazy situation with our lives, something we never expect, and obviously it’s completely different, not only in football.

“For sure, football is going to bring what football wants, and we need to be open to this and, of course, whether to accept or not.

“I don’t feel that it’s one year that I’m not working, to be honest.

“Maybe because of the last seven or eight months, with no fans in the stadiums.”

How will Brexit impact Premier League transfers? The new points system and how it works

Maguire ‘looking forward to getting on with life’ after emotional interview

Ferdinand admits Rooney realised he had been out celebrating

Eric Dier backs friend Dele Alli to rediscover his best form
Liverpool hero Peter Crouch changes mind on Roberto Firmino with Diogo Jota advice
Best News
Recent Posts
This website uses cookies to improve your user experience and to provide you with advertisements that are relevant to your interests. By continuing to browse the site you are agreeing to our use of cookies.Ok