‘Abundance of very, very good batsmen’: Why India can still win without Kohli

When India created history with its first series win in Australia two years ago, the success was marked with an asterisk by some on the subcontinent as it came against a local side missing Steve Smith and David Warner.

Reflecting on the series win, former captain and chairman of the Indian board Sourav Ganguly suggested this success this summer would be viewed more highly. 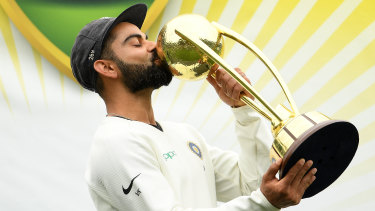 Virat Kohli will miss the final three Tests of the series, but India’s batting depth is strong.Credit:AAP

"I think that's going to be a bigger challenge for them and I am sure [with] the standards Virat sets for himself and his team, he'll know at the back of his mind that the 2018 Australian team was not the best Australian team of his generation," Ganguly said on the India Today show last December.

The same could not be said if India were to make it back-to-back triumphs with their inspirational leader Virat Kohli missing three of the four Tests.

Though masked on their arrival in Sydney on Thursday, there are still plenty of familiar faces in the strong Indian touring party.

With seven wins from 48 Tests, Indian sides have struggled in Australia, their batsmen unable to cope with the pace and bounce, and their bowlers lacking the speed to make a mark in local conditions. The last two teams Kohli has led to these shores buck that tradition.

It was not that long ago international teams believed they could "bully" India's batsmen away from the comforts of their sluggish decks of home.

"The general conversation was we'd just bully them," Mickey Arthur told The Sydney Morning Herald and The Age of South Africa's plans for India's 2006/07 tour of the country.

India's current crop are made of sterner stuff, as Australia's quicks learned two years ago when they were battered into submission, admittedly on docile tracks which did not suit the home side's strengths.

Kohli remains the kingpin but their batting depth means his unavailability for the final three Tests should not be a crippling blow. Cheteshwar Pujara and Ajinkya Rahane can both score big runs in Australia.

Rohit Sharma, one of the most dynamic players in the game, has a golden opportunity to stamp himself on the Test scene. Dominant in the white-ball arena, Sharma has taken time to find his feet in the longest format but Arthur believes he now has the technique to succeed. 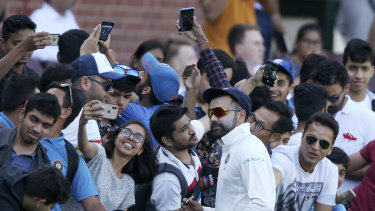 Can Rohit Sharma dominate Test cricket like he has the white-ball formats?Credit:AP

"You miss your lengths, miss your areas, he's hitting you for four," Arthur says. "Those are the type of batsmen who you don't like bowling at. They move the game forward, they can move it forward in a session. He would be the one I'd earmark to step up when Kohli goes home."

Highlighting India's batting depth, opener Mayank Agarwal was a rock at the top when he debuted mid-series.

Arthur believes youngster Shubman Gill, with a first-class average of 73, will be the find of this tour. The 21-year-old left Arthur in awe with the way he treated world-class quicks such as Pattinson, Jasprit Bumrah and Trent Boult in the IPL.

"I know it's T20 cricket on flat wickets in the UAE, but he was standing there hitting the quicks in front of square," Arthur says. "Those young guys don't worry about pace and bounce anymore.

"If he gets an opportunity, there's a lot of wow factor about him. He's a superstar in the making."

Pakistan and New Zealand did not have the raw speed to apply enough pressure on Australia's batsmen. India do.

In Bumrah, Mohammed Shami and Umesh Yadav, the visitors have three frontline quicks capable of breaking 140 km/h, which is crucial for success in Australia. Their back-up, Navdeep Saini, can hit 145km/h-plus. 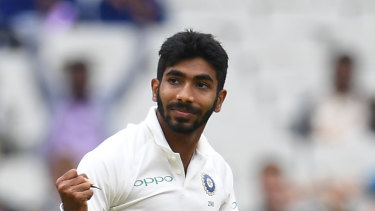 Jasprit Bumrah is part of a high-speed Indian pace attack.Credit:AAP

"They're talented. They're the only team that's come with a high speed attack and that's why they won last time," former Australia coach Darren Lehmann says.

"Everyone else brings medium-pacers, and that doesn't work in Australia. You need speed, because the wickets are so good."

Without Smith and Warner, Australia lacked the batting talent to test the stamina of India's quicks. But with their aces back and Marnus Labuschagne's rise to the world's elite they now do.

Australia will target spinner Ravi Ashwin in the belief they can tire the fast men by making them bowl more spells with shorter breaks. Ashwin's record here of 27 wickets at 48 is vastly inferior to his career mark but if he can pin down Australia like he did last time, when he conceded 1.71 runs per over, he will have played his part.

Heat is on in WBBL `Village’

Nowra races: Gary Portelli could be a thorn for the Robert and Luke Price stable

Inside Running: Jamie Kah hoping to get back into winner’s circle
Perry stars but Sixers blown away by Hurricanes
Best News
Recent Posts
This website uses cookies to improve your user experience and to provide you with advertisements that are relevant to your interests. By continuing to browse the site you are agreeing to our use of cookies.Ok