Nine years ago a fresh-faced young New Zealand trainer called Trent Busuttin came to Melbourne for the spring with a promising stayer called Sangster who ran in the traditional Caulfield Derby trial, these days known as the Neds Classic.

Sangster just got collared that day by another horse with strong Kiwi connections, Sabrage, but reversed the form a couple of weeks later in the Flemington classic and won the Derby. 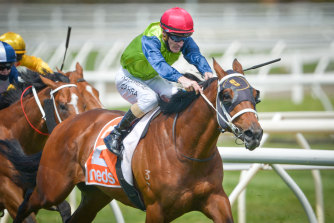 Albarado is being aimed at the Derby after winning the Neds Classic on Caulfield Cup day.Credit:Getty Images

Busuttin, along with partner Natalie Young, is based at Cranbourne now, having made the move to Victoria a few years ago.

But he still likes to target Derbies, and that's the plan for Albarado, who did what Sangster couldn't do when he took out the 2000-metre group 3 Classic in a close finish to give in-form jockey Mark Zahra his second winner of the day.

Busuttin is hoping that the son of Savabeel, a former Cox Plate hero who is one of the leading influences for stamina these days, will be able to emulate Sangster in a fortnight's time.

"He [Sangster] was our first good horse and we came here and he took off like that and got nutted on the line. Same colours, most of the owners of Sangster are in this horse, so hopefully this bloke can replicate it in a couple of weeks."

Albarado prevailed in a blanket finish from Let's Karaka Deel and the running-on Hit The Shot.

John Allen, who rode the runner-up, said: "He’s still a bit green – a bit to learn. Probably got a bit lost in front. He’ll learn a lot from that. He wasn’t disappointing but just quite green."

Fred Kersley, who partnered the third-placed Hit The Shot for Matt Cumani, said his horse would be better over further and at Flemington.

“Great run. Couldn’t be happier. Just a shame that we weren’t at Flemington today."

The Ethereal Stakes is a traditional lead-up for the VRC Oaks, but Saturday's heroine, Chica Fuerte, is unlikely to try to stretch her stamina much further than the 2000m of the Ethereal and will target the Wakeful Stakes for fillies on Derby Day rather than the Oaks four days later. 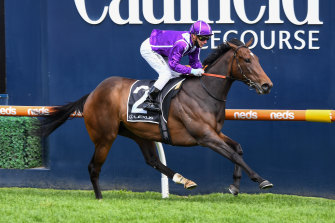 Chica Fuerte was too good in the Ethereal Stakes.Credit:Getty Images

She won courtesy of a smart front-running ride by Ben Melham, who was also winning for the second time in the afternoon having scored on Incredulous Dream in the QMS Media Plate earlier.

He was able to dictate the pace and tempo, kick clear in the straight and had enough in reserve to hold off outsiders Salto Angel and Star Of Eden.

"The Oaks is probably not on the agenda at this stage, she's probably a preparation away from that but the Wakeful would be a nice grand final," said trainer Sam Freedman.

Fixtures for Bob Willis Trophy: Essex to host Kent in opening round

Bondi Stakes: Peltzer is fighting fit for his first test at the mile

A day for the ages for Zahra and Waller as Verry Elleegant takes Caulfield Cup
Nowra races: Royal Monarch hoping luck changes in Mollymook Cup
Best News
Recent Posts
This website uses cookies to improve your user experience and to provide you with advertisements that are relevant to your interests. By continuing to browse the site you are agreeing to our use of cookies.Ok