The northern hemisphere-bred three-year-old brings some of the world's best form lines, having run third to Magical and Ghaiyyath at his most recent start in the Irish Champion Stakes, beating home Sottsass who went on to win the Prix de l'arc de Triomphe. 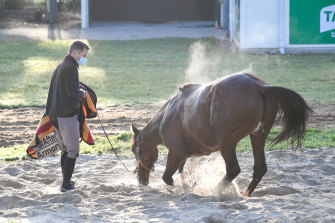 The son of Galileo worked in partnership with Magic Wand on Wednesday morning, and while the mare is likely to improve as her campaign goes on – as she did winning the Mackinnon Stakes third-up last spring – Armory shapes as the stable's leading Cox Plate hope.

"They worked from the 1300 [metre mark], they both helped one another along on the grass," Comerford said.

"They did a sharper piece of work than they have been doing, equally like Anthony Van Dyck, his last piece of work before the Caulfield Cup, just to sharpen them up.

"I think it was good work to watch. Really they're fit and well and in great order so I'm very pleased with them."

Comerford said Magic Wand would prefer a firm Moonee Valley track on Saturday, but any rain would not worry Armory.

"He would like top of the ground but he's well used to [the soft]," Comerford said.

"Magic Wand on the other hand would want [to run] on top of the ground. I would say Armory won't have any problem [to get around The Valley]; he's very straight forward and he's got a good draw so it should be OK for him.

"He's had plenty of racing, he's had the right type of racing and he's always stepped up. He knows what it's all about, he won't lack experience."

"He canters on the sand every other day, he has his two work mornings a week. He'll go back now and pair up with Anthony Van Dyck; you couldn't be happier with him."

‘The only way I want to play’: Perry refusing to give up on all-rounder role

Hanseatic among stars returning to track

Racecaller Bryan Martin called 28 Cox Plates, but he also owned two-time winner Fields Of Omagh
Vuelta a Espana 2020: Primoz Roglic defends red jersey as Marc Soler wins first Grand Tour stage
Best News
Recent Posts
This website uses cookies to improve your user experience and to provide you with advertisements that are relevant to your interests. By continuing to browse the site you are agreeing to our use of cookies.Ok