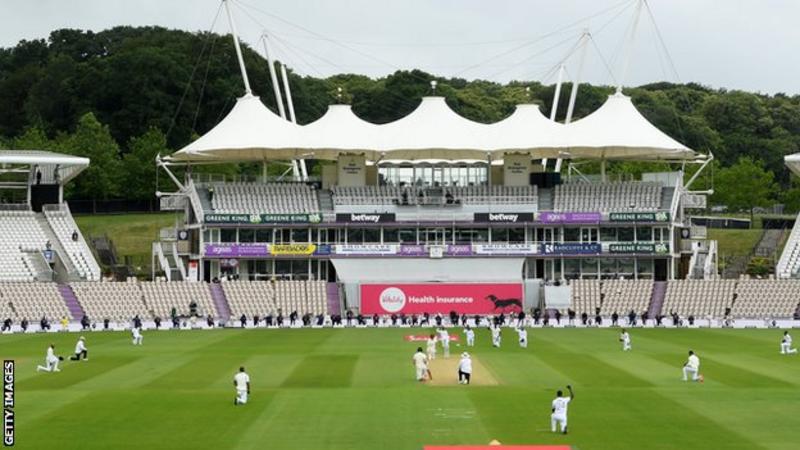 England and West Indies players all took a knee in support of the Black Lives Matter movement before the first Test in Southampton.

Match officials also took part, while both sets of players are carrying a logo on their shirts.

Speaking on Tuesday, stand-in England captain Ben Stokes said: “We have a massive opportunity to do something really powerful as an England team.

“We are doing that by showing support towards the West Indies.”

After observing a moment of silence to remember the lives lost to the coronavirus pandemic and West Indies great Sir Everton Weekes, the players and officials took their positions as if to start the Test, while other squad members and backroom staff lined the boundary.

They all then dropped to a knee for a period of time that was ended by the blast of a whistle.

There have been protests around the world since the death of American George Floyd in May.

Floyd, a 46-year-old unarmed black man, died after his neck was knelt on by a police officer for nearly nine minutes while he was being restrained.

Premier League players have knelt at the beginning of every match since English football’s top flight resumed following the coronavirus lockdown.

Some drivers took a knee at last weekend’s Formula 1 Grand Prix in Austria.

In Southampton, the players and officials knelt for just over 20 seconds, and there was also a flag carrying the crest of West Indies and the Black Lives Matter logo hung in the tourists’ dressing room.

Asked before the match whether any show of support for Black Lives Matter would be repeated throughout the three-Test series, Stokes said talks between England and West Indies were ongoing.

As they practised on Wednesday morning, England players wore training shirts that carried the names of key workers who have served through the coronavirus pandemic.

The people named on the shirts were nominated by their local cricket clubs and included teachers, doctors, nurses and carers.

“We’re only able to play this Test match because of the amazing job that key workers up and down the country have done to help us through this pandemic,” said Stokes.

“Wearing their names is a real honour for us, and is a small sign of our appreciation for the incredible work they have done.”

Oakbank Racing Club legend John Glatz, who almost lost his life in the bushfires last year, has returned to the track

Michael Holding's incredibly moving speech on racism before Test match
England vs West Indies: Cricket returns for first Test as frustrating and engaging as it ever was
Best News
Recent Posts
This website uses cookies to improve your user experience and to provide you with advertisements that are relevant to your interests. By continuing to browse the site you are agreeing to our use of cookies.Ok