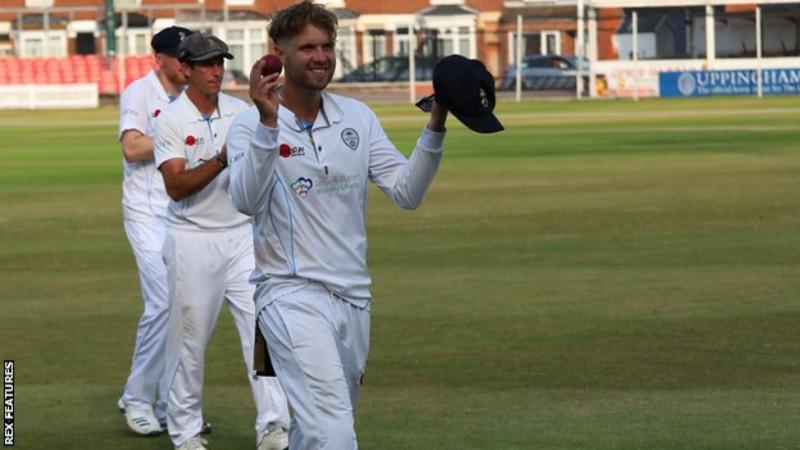 On top of last week’s rousing win over Nottinghamshire at Trent Bridge, Derbyshire bowled out their other East Midlands neighbours for 220 to set up a nine-wicket win.

Unfancied Derbyshire go top of North Group, ahead of Lancashire, who got off the mark with a comfortable innings win over Durham.

The third of three victories inside three days came at Canterbury, where Kent pair Jordan Cox and Jack Leaning set new batting records before the ageless Darren Stevens took 5-50 to bowl his side to an innings victory.

The other more unfortunate headline makers in South Group were luckless Hampshire.

The day after losing England’s Liam Dawson for the season with a ruptured Achilles tendon, they lost fast bowler Ryan Stevenson who suffered a nasty leg injury.

He needed extended treatment after sliding into a metal tent pole, part of one of the marquees on the boundary edge at Middlesex’s newest outground home at Radlett.

After wins over Nottinghamshire and now Leicestershire, who started this round of fixtures on top of North Group, Derbyshire could now face their toughest test yet when they go to Leeds this Saturday to face pre-tournament group favourites Yorkshire.

But, after winning their opening group game, Yorkshire may have a job on their hands to make it two wins from two themselves.

Despite 75 from England’s Jonny Bairstow and an unbeaten 41 from Jonny Tattersall, the Tykes closed on 257-7 against Notts at Trent Bridge, only 168 ahead and with just three wickets in hand.

Lancashire, for the moment, are up to second in the group, after their pacemen bowled out Durham at Chester-le-Street for just 110 – their first win and the hosts’ second defeat.

Warwickshire have their sights set on a possible last-day run chase at Bristol against Gloucestershire but it might take some doing on such a slow track.

For the third successive day, runs came at a trickle as the Bears were bowled out for 247, a first innings lead of 37. They then limited the hosts to 197-6 second time around, of which Graeme van Buuren made 72.

Worcestershire started the week top of the group, before being displaced by Somerset, two-day winners over Northants on Sunday evening. But they may have their work cut out to force a final-day victory against Glamorgan.

Billy Root hit 118 as Glamorgan totalled 374, which was 81 in arrears on first innings.

The Pears reached 98-2 by the close to extend that overnight advantage to 179, Daryl Mitchell closing on 48 after the late loss of first-innings centurion Jake Libby (44) and nightwatchman Joe Leach to the last ball of the day for a fifth-ball duck.

The timing of any Worcestershire declaration could be crucial but Glamorgan’s need to win after losing their first game might also prove a big factor in setting up an exciting finale. 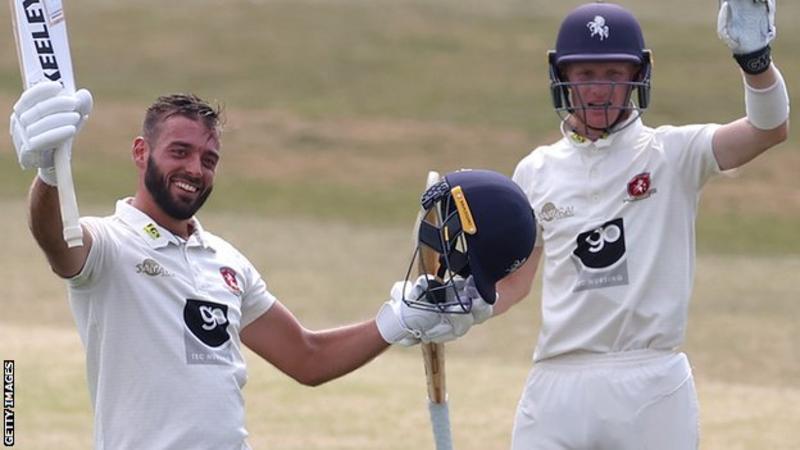 Stars of the show at Canterbury were Kent new boys Cox and Leaning, who rewrote the county’s batting records against hapless Sussex.

The pair extended their overnight double-century stand to 423 – the highest partnership for any wicket in Kent’s 156-year history, youngster Cox reaching 238 not out, on only his fifth first-class appearance, while Leaning, their winter signing from Yorkshire, made 220 not out, also a career-best.

Stunned Sussex then buckled to the wiles of 44-year-old Stevens, bowled out for 173 to lose by an innings and 25 runs.

After Stevenson’s collision with that metal tent pole at Radlett, on top of the absence of Dawson, little-used off-spinner Felix Organ came to the party with 4-42 to help bowl out Middlesex for 201 and leave Hampshire a target of 158 to win.

Although they have just nine fit batsmen, Hampshire closed on 60-2 and, with skipper Sam Northeast not out overnight, should get the job done.

At Chelmsford, weakened Surrey closed on 27-1, still needing a further 310 to beat Essex. That was after Essex had been bowled out for 261, of which Paul Walter made 46 and Alastair Cook 42.

Michael Holding wife: Who is the cricket legend married to?

Raceday focus: Best bets and inside mail for Tamworth and Grafton

Dan Lawrence ruled OUT of England's second Test against Pakistan
West Australian jockey William Pike excited about partnering Bob Peters horses in Melbourne spring
Best News
Recent Posts
This website uses cookies to improve your user experience and to provide you with advertisements that are relevant to your interests. By continuing to browse the site you are agreeing to our use of cookies.Ok