‘We’ll gamble to win’: Defiant Stuart Broad insists that England will push for victory against West Indies after his heroics keep them within sight of dramatic second Test victory

Stuart Broad bowled England to within sight of a dramatic second Test victory and then insisted they will gamble on losing at Old Trafford to push for the win they need to have any chance of regaining the Wisden Trophy.

Broad, controversially left out of last week’s first Test defeat, took three of the six West Indies wickets to fall after tea on the fourth day as the second Test suddenly exploded into life.

West Indies avoided the follow on after being bowled out for 287 but England extended their lead to 219 by the close after opening their second innings with Ben Stokes and Jos Buttler and will chase quick runs today before trying to force a series- levelling win. 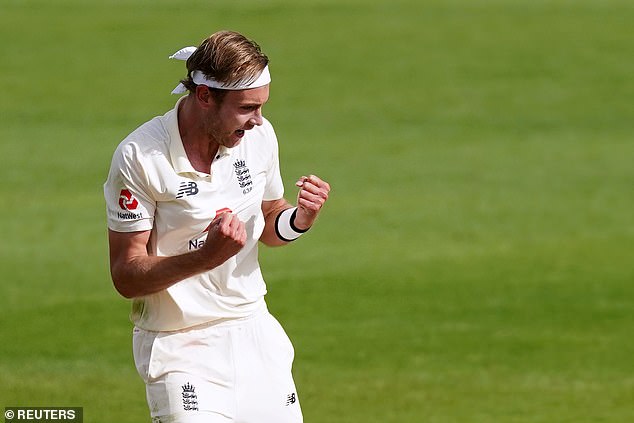 ‘I think we want a minimum lead of 270 and that could set up a brilliant last day,’ said Broad who moved to within 12 of 500 Test wickets.

‘We want to make this 1-1 with one to play and with the time that’s gone because of the weather we might have to take a risk.

‘I bet everyone thought the game was going nowhere at tea but then it sparked into life.

‘I think we’ll dangle a carrot and all results will be possible but we’ll have to bowl pretty badly to lose.

‘We’re going to have to set the game up in the first 45 minutes to an hour of the day. 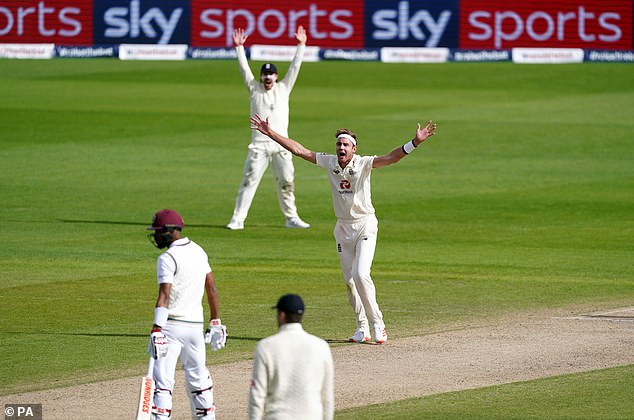 ‘The key might well be to get two new balls because we’ve seen the new ball behave differently on this pitch and it gives the bowlers a chance.

‘We’ve given ourselves a chance of winning this game which is a great position to be in.’

A defiant Broad, who reacted angrily to the axe at the Ageas Bowl, insisted he should not be written off yet and wants to emulate his strike partner Jimmy Anderson in playing for England towards his 38th birthday.

‘Sometimes I get put into an older category than I am,’ he said. 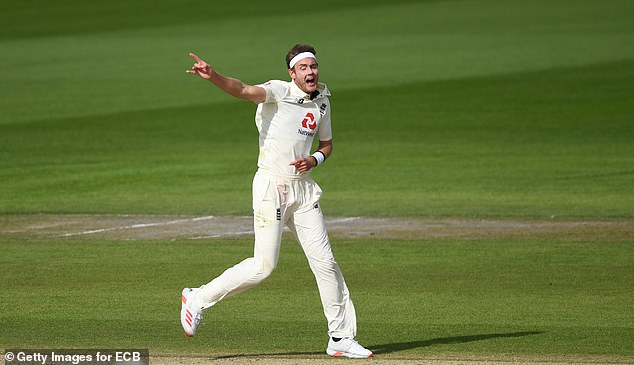 ‘I’m 34 and Jimmy has taken something like 130 Test wickets since turning my age. Why can’t I do the same? I’m hungry and my fitness record is good. I feel like I can emulate Jimmy.’

Stokes left the field after tea with what looked like a painful rib injury but the problem was indigestion and all he needed was a comfort break.

‘He didn’t know what that was to be honest and I probably can’t repeat what solved it,’ added Broad.

‘It was almost winding him when he was bowling so he relieved himself and felt better.’

Chris Silverwood urges his England players to give one final push

And then there were two: Pogacar beats Roglic as Bernal cracks on the Colombier

Love is a deserved favourite for the Arc – Dettori

Broad produces whirlwind spell to give England hope of victory vs West Indies
Luke Currie eyes return to racing in time for Melbourne spring carnival after recovering from February fall
Best News
Recent Posts
This website uses cookies to improve your user experience and to provide you with advertisements that are relevant to your interests. By continuing to browse the site you are agreeing to our use of cookies.Ok