The brother of former star South Africa paceman Vernon Philander has been fatally shot in Cape Town, metres from his family's home.

Tyrone Philander, the younger brother of the retired cricketer, was delivering water to a neighbour in Ravensmead on Wednesday when he was gunned down, according to media reports in South Africa. 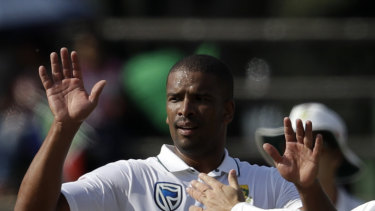 "They don’t know what happened. They were in the yard, busy with the washing and they heard shots," a spokesperson for the Ravensmead Community Policing Forum, Zelda Tantraal, said.

A reporter from the African News Agency (ANA) said Philander's mother Bonita and a family member saw her son's body on the street.

The shooter is reportedly still on the run.

Philander, who bowed out of international cricket this year, thanked the public for their messages of support.

"Our family is coming to terms with the brutal murder in my hometown of Ravensmead earlier today. I would like to ask that the family’s privacy be respected during this difficult time," Vernon Philander said in a statement released by his family.

"The murder is now the subject of a police investigation and we respectfully ask that the media give the police the space to conduct a thorough investigation. There are no details around the incident at the moment and speculation will make it very difficult for us as a family to mourn in peace.

"Tyrone is forever in our hearts. May his soul rest in peace."

Philander was an integral part of South Africa's Test side, which climbed to the top of world cricket in 2012 and was one of the strongest nations in the past decade.

A highly skilled swing bowler, Philander played 101 games for his country, including 64 Tests for 224 wickets at an average of 22.32. He is seventh on the Proteas' Test wickets' list.

Crawley admits he is desperate to score first England century

Wohler gets travel exemption to Melbourne for Cup

Ganna powers to a second Giro stage win, Almeida extends lead
Decision on whether Darren Weir will stand trial on animal cruelty charges has been adjourned
Best News
Recent Posts
This website uses cookies to improve your user experience and to provide you with advertisements that are relevant to your interests. By continuing to browse the site you are agreeing to our use of cookies.Ok