There is a window for Australian internationals to play in the final two to three weeks of the event but getting Steve Smith, Warner, Pat Cummins, Mitchell Starc and others to turn out under the BBL lights is not straightforward. 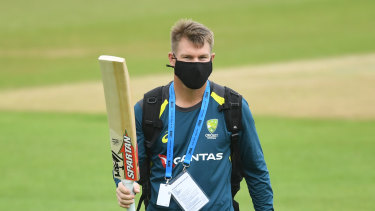 David Warner is unlikely to play in this season’s Big Bash League.Credit:Getty Images

Plans to lure the cream of Australian cricket are in their early stages, according to a source familiar with the issue. BBL clubs were surprised by CA's announcement last week that games against Afghanistan and New Zealand were being postponed.

While many clubs have little room in their salary caps to make a late play for big names, insiders believe player welfare and mental health after long periods in biosecurity bubbles are the main issues of concern.

CA is exploring whether restrictions could be eased if Australia's coronavirus situation keeps improving.

One idea being considered is allowing players to live at home, outside of the hub, when the travelling BBL roadshow visits their home towns.

This would require approval from governments, an issue further complicated should clubs from Western Australia and Tasmania, the states with the most onerous quarantine measures, qualify for home finals.

CA is yet to finalise the BBL schedule. One option is to release it in phases to give the fixtures flexibility in the latter stages of the event.

Player restrictions have also become a talking point in the women's game. Cricket NSW has written to CA asking why Sydney-based players in the WBBL are required to live in the hub instead of home.

The Sydney Sixers have made inquiries to Test stars Smith, Starc and Josh Hazlewood but are aware of the drawbacks of spending time in another hub. Some players will have lived under stringent COVID-19 protocols for nearly five months by the time Tests against India finish in mid-January.

It's not to do with the money, it's to do with whether he wants to do it.

Smith, Warner, Hazlewood and Cummins, all playing in the lucrative Indian Premier League, have already been in a hub for six weeks. They will spend another two weeks in a stage three lockdown before departing for the tour of England.

Warner's manager James Erskine cast huge doubt on the three form players taking part in the BBL for the first time since 2013/14.

"It's not to do with the money, it's to do with whether he wants to do it," Erskine told The Sydney Morning Herald and The Age. "I haven't discussed it with him but I would think he's more than likely to spend time with his family than in the BBL. The fact we haven't had the conversation probably tells me he won't."

National men's coach Justin Langer last month said the "blood drained out of some of their faces" when it was pointed out some players could spend 173 days in a row in a bubble.

The coach and selector has already flagged the likelihood of players missing games this season so they can spend time with their families.

Whether Hazlewood, Cummins and Starc are cleared to play in the BBL by CA's high performance arm will hinge on their workload in the Tests. Some in the game think there could be pressure from above to release them, given the broadcast money at stake.

The prospect of more time on the road in either South Africa, should that Test tour go ahead, or New Zealand in February and March, is another factor against playing in the BBL. Many players would then leave for next year's IPL.

Attracting top-end, headline-making talent will strengthen Jolimont's counter-argument against Channel Seven's concerns about the quality of this year's BBL in the battle over the value of broadcast rights.

However, Seven believes even if the likes of Smith, Warner and Starc were signed it would happen too late to sell advertising packages.

Mirage Dancer will be out to improve on last year’s third in Saturday’s Caulfield Cup.

Cricket star’s brother ‘ashamed’ of fake plot
The Pro Punter gives his final plays for Saturday at Randwick and Flemington
Best News
Recent Posts
This website uses cookies to improve your user experience and to provide you with advertisements that are relevant to your interests. By continuing to browse the site you are agreeing to our use of cookies.Ok