Meribel: Primoz Roglic took a giant leap towards a maiden Tour de France title when he extended his overall lead after the 17th stage on Wednesday, an unforgiving mountain rollercoaster dominated by Colombian Miguel Angel Lopez.

Lopez prevailed at the end of the 10km trek from Grenoble, 15 seconds ahead of Roglic, who extended his advantage over fellow Slovenian Tadej Pogacar to 57 seconds, four days before the final parade in Paris. 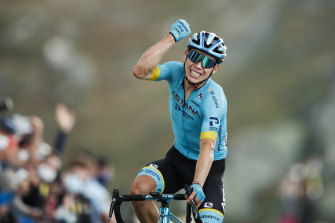 Roglic was only second best at the top of the Col de la Loze, an unforgiving 21.5km ascent at an average gradient of 7.8 per cent, but it was enough for the Jumbo-Visma rider to tighten his grip on a race he has controlled from the start.

Lopez, twice a Vuelta stage winner, jumped away from the leading group 3.5km from the finish and appeared to defy gravity in the finale as the road rose up to 25 per cent under threatening skies, 2304 metres above sea level.

The 21-year-old Pogacar now faces an uphill battle to unsettle Roglic, who suffered but was never really threatened.

Lopez moved up to third in the standings, 1:26 off the pace, ahead of another gruelling mountain stage on Thursday, over 175km between Meribel and La Roche sur Foron.

Another Colombian, Rigoberto Uran, had a bad day and slipped down to sixth from third.

The stage started without defending champion Egan Bernal, who pulled out because of back pains, with his Ineos Grenadiers team saying he would focus on new goals this season.

The British team shone on the road, however, with Richard Carapaz the last man standing in the day's breakaway, although the Giro d'Italia champion was caught by the main contenders when Lopez upped the pace. 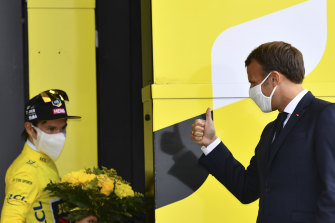 While the move meant that twice runner-up Nairo Quintana was dropped, the Jumbo-Visma domestiques stayed with the group and the Dutch outfit were in bigger numbers in the finale.

Three breakaway riders – Julian Alaphilippe, Carapaz, Gorka Izagirre – reached the bottom of the Col de la Loze with a 1:50 advantage, but it was clear it would not be enough on the toughest climb of this year's Tour.

Carapaz, however, capitulated when the top guns started the battle.

Lopez opened a gap over Roglic and Pogacar and never looked back, earning his Astana team their second stage win in this year's Tour.

Roglic did not respond at first, but he then accelerated to drop Pogacar, who will need to take risks in the last mountain test on Thursday if he is to beat the odds.

French president Emmanuel Macron followed part of the stage on the road, where hundreds of fans gathered despite the COVID-19 outbreak.

"It's extremely important to show that we can live with the virus," said Macron.

England vs West Indies: Cricket returns for first Test as frustrating and engaging as it ever was

BUMBLE ON THE TEST: Stokes showed Sibley how to put his foot down

Indian hospitals face oxygen shortage as COVID-19 cases surge
Australia claim three-wicket victory in series decider against England
Best News
Recent Posts
This website uses cookies to improve your user experience and to provide you with advertisements that are relevant to your interests. By continuing to browse the site you are agreeing to our use of cookies.Ok