Matera: Arnaud Demare claimed his second stage in the Giro d’Italia by winning the sixth in another mass sprint on Thursday.

Joao Almeida held onto the pink jersey despite a mid-stage scare when he was crashed into by another rider. 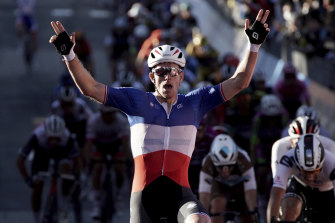 France’s Arnaud Demare celebrates his win in stage six of the Giro d’Italia.Credit:AP

For his 12th victory this season, Demare started his sprint before anyone else on the slightly uphill finishing straight and won easily ahead of Australian Michael Matthews (Team Sunweb) and Italian Fabio Felline (Astana).

Demare required nearly five hours to complete the 188-kilometre route from Castrovillari to Matera, which featured one third-category climb and a hilly finish.

Matera – in the southern Basilicata region – is known for its cave dwellings, which were inhabited until the 1950s.

Almeida stopped on the side of the road to fix the radio under his jersey with 37 kilometres to go when he was hit. Sprinter Fernando Gaviria went down in the same incident, but both riders quickly got going again.

This was Demare’s third career win at the Giro. He also won a stage in Modena last year to go with his two stage victories at the Tour de France in 2017 and 2018.

Four riders formed an early breakaway and established a lead of more than 10 minutes on the peloton before eventually being reeled back in.

James Whelan was the last of the breakaway riders to be caught, with 14 kilometres to go.

Stage seven on Friday, a mostly flat 143km leg from Matera to Brindisi, also sets up well for sprinters.

The Giro was rescheduled from its usual May slot because of the coronavirus pandemic. The race ends on October 25 with an individual time trial in Milan.

Clive Cox retains full faith in Nando Parrado
Trainer Paul Nicholls’ lowdown on Saturday Chepstow runners
Best News
Recent Posts
This website uses cookies to improve your user experience and to provide you with advertisements that are relevant to your interests. By continuing to browse the site you are agreeing to our use of cookies.Ok