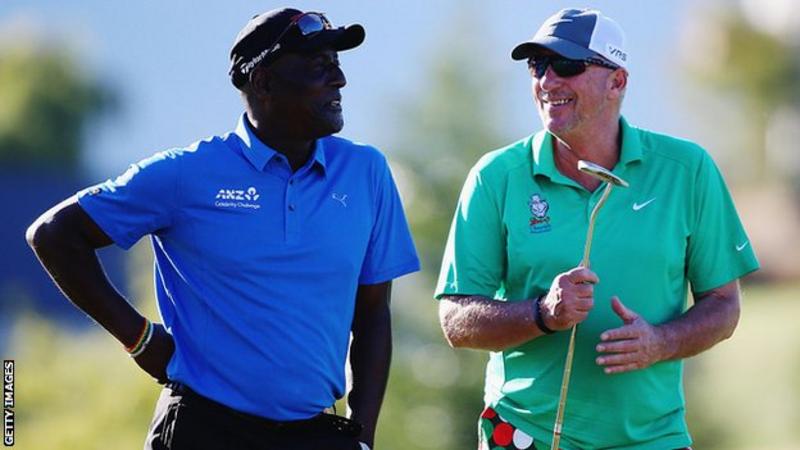 The Wisden Trophy, contested between England and West Indies in Test cricket, is to be replaced by a new trophy named after Sir Vivian Richards and Sir Ian Botham.

The two sides will then compete for the Richards-Botham Trophy when they next meet in a Test series.

“It really is a big honour, quite amazing,” Botham said.

The new trophy is a tribute to two of the most iconic players in cricket and one of the sport’s greatest rivalries.

All-rounder Botham scored 5,200 runs for England and took 383 wickets in 102 Tests. Antiguan Richards is regarded as one of the greatest ever batsman, scoring 8,540 runs in 121 Tests for West Indies at an average of 50.23.

Speaking to BBC Test Match Special’s Isa Guha, Botham added: “I’m pleased as much for myself as I am for Viv. He’s the best batsman I ever bowled to. In every format of the game, he’s been the best.”

The Wisden Trophy was first awarded in 1963 to celebrate the 100th edition of the Wisden Cricketers’ Almanack.

Former England captain Michael Atherton had previously called for the trophy to be rebranded, and said that John Wisden – a county cricketer who founded the Almanack – had no relevance to the England v West Indies fixture.

The Wisden Trophy will now be retired and displayed at a museum at Lord’s.

Botham and Richards competed against each other many times over their international careers. But they also played together for Somerset and struck up a strong friendship off the field, and even shared a house during that time.

“There are times when I came to England and Ian made me felt so welcome,” Richards said.

“There can be some funny people around the world, not everyone appreciates this colour.

“Ian adopted me as a friend. At that time, we sent a huge message to the world that two people of different races can compete together, live together and share the good times together.

“You’re going to have two good guys, in my opinion, whose names are going to be on this trophy.”

The West Indies have won 14 series against England since the Wisden Trophy was first awarded, and held it for 27 years between 1973 and 2000.

England have won the nine times and four series have ended in a draw.

With the current series level at 1-1, the winner of the third Test at Emirates Old Trafford will lift the Wisden Trophy. Current holders West Indies, who beat England 2-1 in 2019, will retain it should the series be drawn.

Varian tribute to Mountain Angel
Fixtures for Bob Willis Trophy: Essex to host Kent in opening round
Best News
Recent Posts
This website uses cookies to improve your user experience and to provide you with advertisements that are relevant to your interests. By continuing to browse the site you are agreeing to our use of cookies.Ok