England vs West Indies: Cricket returns for first Test as frustrating and engaging as it ever was

If you have been lucky enough to reunite with the family and friends after lockdown, you will have had that moment. Long after the embraces and tears, when you remember how it all was. Ultimately, the annoying bits.

The mother that worries you have not been eating enough. The father that reckons you’ve had too much. The sibling that still knows how to push your buttons. Those mates who are still late even though they’ve had months of notice – or the ones that chastise you for doing so. That’s real love, the kind reinforced by healthy amounts of eye-rolling. A reminder of the faults that make what you love so unique.

Maybe, then, this was the way cricket was supposed to return. With just 4.1 overs possible by 2:50pm due to rain, and only a further 13.3 overs in the hour and 37 minutes. Why fans at home had their misery compounded at not being able to attend matches in the near future when technical difficulties meant Sky missed the first wicket. That – England 35 for one after 17.4 overs – was day one’s lot.

It was a misery shared by those taking part. Or not, in case of Stuart Broad, whose streak of 51 consecutive home Tests ended, sidelined for a brisker triumvirate of Jofra Archer, Mark Wood and his regular partner James Anderson, supplemented by Dom Bess’s off-spin and now uber allrounder, captain Ben Stokes. Numbers like “34 years old” and “485 Test wickets” tell the story of both sides of that decision. This is absolutely not the end, nor is it ‘just’ rotation.

Or even by Dom Sibley, who spent lockdown shedding 12kg and then lost his off stump four balls into his return. His misjudgement to leave a delivery from Shannon Gabriel that moved in when the previous delivery had moved out was the only wicket in an underwhelming 82 minutes of play.

But the pitfalls of the game are no strangers to us, even if they were becoming unfamiliar after not seeing any of it since March. And while these issues gave us some intimate torment, there were joys to behold from old times.

The usual hub-bub on the field at least with training drills and huddles – acceptably spaced – opening up proceedings. Two blazered captains tossing a coin up into overcast skies knowing how it falls will play a huge part in the coming days. The pontification as to whether Stokes was right to bat first followed, as it would have done if he’d chosen to bowl.

That first delivery of the match, skewed into the off side by Rory Burns off Gabriel, brought with it a welcome sound of leather on willow. Burns would also provide the first run – a leg bye – and the first boundary of this return: a typically atypical fluent flick through midwicket 35 balls – or four-and-a-half hours – into the day. He might not have been allowed to last the course had he been given out LBW when he offered no stroke to his fourth delivery. A more generous umpire – perhaps a more “match fit” umpire? – would have given the bowler the benefit of clipping, which is what ball tracking confirmed.

He would add two more boundaries – the best a wristy slap through backward point off Alzarri Joseph – to finish level on boundaries with Joe Denly, whose were a fraction more skittish. Few have split opinion more confusingly than Denly: a now 34-year old in the unenviable position of being neither here nor there AND a number three.

Perhaps, though, in a world of uncertainty, the uncertain one deserves faith. His 14 off 48 (Burns alongside him on 20 off 55) saw him almost find mid on without a run to his name with an ill-judged pull shot and then squirt his third four perilously through the slip cordon. Beyond him at number four is Zak Crawley who has age and a higher ceiling on his side. Joe Root’s return for the second Test next week will almost certainly be for Denly should he be outscored. That is for certain. 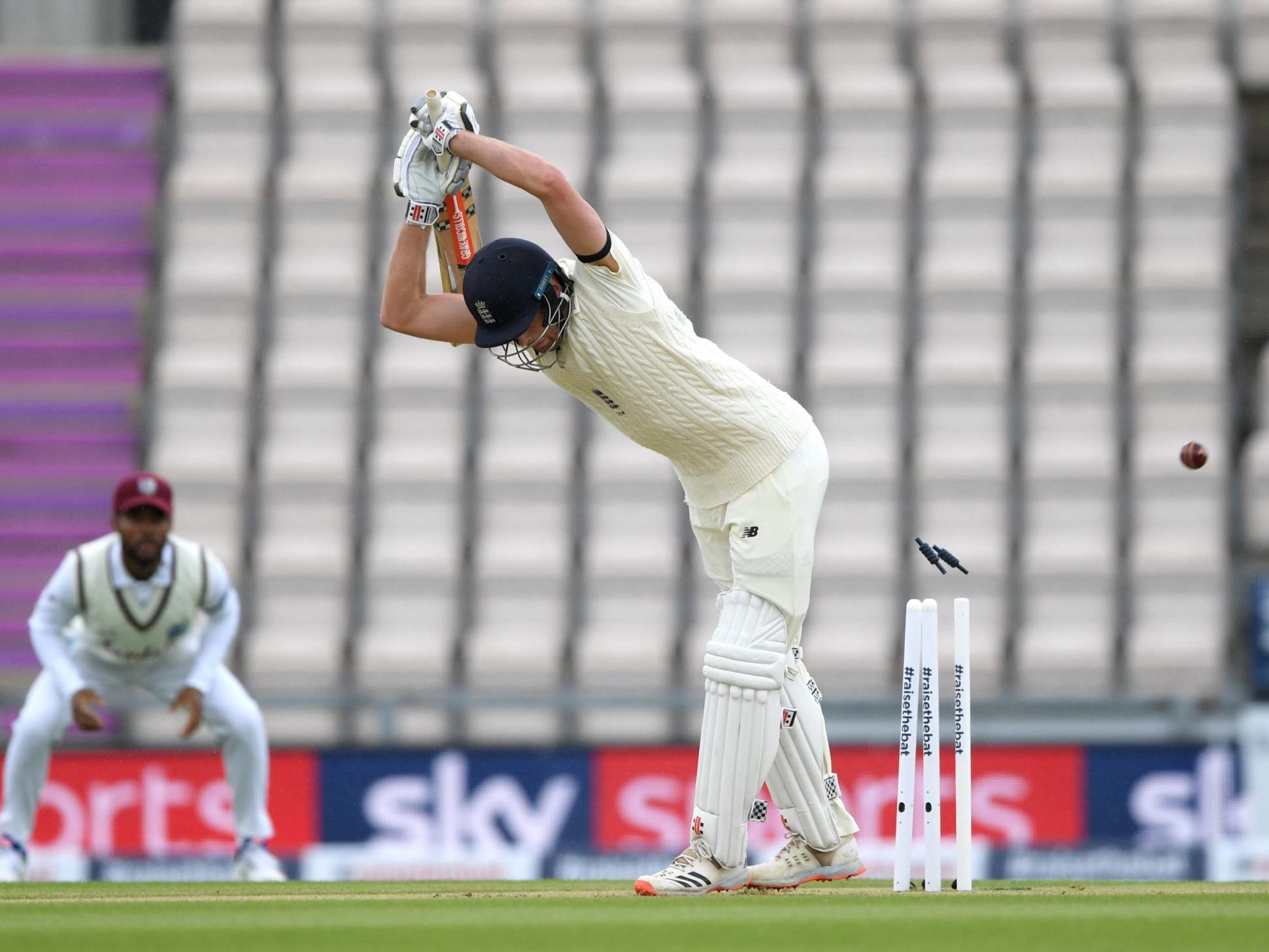 Beyond the prohibited use of saliva, the matchplay was much the same. The coronavirus protocols, for the most part, were for those on the periphery: the BBC TMS pundits going back to their rooms between on-air stints, the journalists temperature checked and given their own table each, complete with jugs of water and alcoholic wipes.

But this new world cricket has re-emerged into is not just one of coronavirus but social responsibility. And after months of cricket asking awkward questions of itself, the opportunity to make a more visual statement was taken by both sides at the start of play.

With the players braced for the first ball of the day, and with every member of both sets of staff ringed around the boundary in front of the pavilion, both groups took a knee. While doing so the West Indies players raised their right fists, each wearing a black glove to replicate the Black Power salute made most famous by 200m sprinter Tommie Smith who performance the gesture while own the podium at the 1986 Olympic Games. On the broadcast, a stunning rain-delay feature on race led by Michael Holding and Ebony Rainford-Brent not just hammered home what this is all about, but why it is all about.

Cricket and politics has been a bond often used for nefarious means by both. But the taking off the knee in unison will have been all the more profound with so much of the world watching cricket’s return. Ensuring this goes beyond shareable photos and little but a long-term memory is very much down to all within the game – from power-brokers and players to casual observers. Society’s ills are cricket’s to bear, and the English game has many. And this served as a reminder as to how a welcome distraction

Cricket is back. As frustrating and engaging as it ever was. And yet, even after just 82 minutes, clearly never more important for both distraction and purpose.

Jofra Archer: What next for England and their pace bowler?

The Everest 2020: Everything you need to know

Black Lives Matter: England & West Indies players take a knee
MARTIN SAMUEL: We should be saying sorry to the West Indies
Best News
Recent Posts
This website uses cookies to improve your user experience and to provide you with advertisements that are relevant to your interests. By continuing to browse the site you are agreeing to our use of cookies.Ok