Ganna – the time trial world champion and winner of the time trial in stage one – sat up on his bicycle and punched the air before burying his face in his hands as he crossed the line at the end of the hilly 225-kilometre leg from Mileto to Camigliatello in Calabria in stage five. 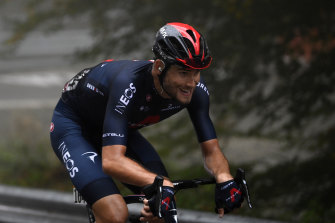 Filippo Ganna powers his way to victory in the fifth stage of the Giro d’Italia.Credit:AP

Patrick Konrad beat Almeida in the sprint for second place as they led the peloton over the line, 34 seconds behind Ganna.

Italian Ganna, who rides for Ineos Grenadiers, had been part of the eight-man breakaway and he attacked 16 kilometres from the finish on the first-category climb of the Valico Montescuro.

“I shouldn’t even have gone in the break today, I was supposed to just help Salvatore Puccio," Ganna said. “But after 40 kilometres of attacks, I told him to get on my wheel and we got away with the others.”

It gave Ineos Grenadiers reason to celebrate after team leader and overall favourite Geraint Thomas withdrew from the Giro before Tuesday’s fourth stage after breaking his pelvis in a fall a day earlier.

“Last night Geraint told me to go for it and go in the break, and so I did," Ganna said.

"I respect what my captain tells me, even from his house."

The route didn’t have a single patch of flat road. It had two third-category climbs before the Valico Montescuro.

“It was a very cold stage, with some rain. I am happy with how I rode," Almeida said. "After Caicedo was dropped I managed to stay with the main favourites and gave everything until the finish line.”

Thursday’s sixth stage is a 188-kilometre leg from Castrovillari to Matera featuring one third-category climb.

The Giro was rescheduled from its usual May slot because of the coronavirus pandemic.

The race ends on October 25 with an individual time trial in Milan.

Australia can learn a lot from England after collapse in second ODI, says Adam Zampa

Dame Malliot on target for Champions Day
Brother of Vernon Philander fatally shot
Best News
Recent Posts
This website uses cookies to improve your user experience and to provide you with advertisements that are relevant to your interests. By continuing to browse the site you are agreeing to our use of cookies.Ok