The grand old champion Makybe Diva has weathered what can be the leg-shattering and gut-busting ordeal of Melbourne Cups, going on her appearance at Flemington on Tuesday.

Prior to a most controversial chapter this year Makybe Diva, robust and healthy, guest starred moving around the parade ring, with jockey Glen Boss and owner Tony Santic. 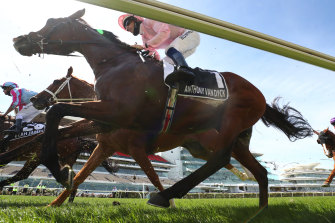 Yet the winner on Tuesday, Twilight Payment, is an eight-year-old while the runner-up Tiger Moth, under Kerrin McEvoy, brilliant for most of the race but guilty of whip breaches in the straight, went into the event with four starts, the lightest foundation in modern times. Nothing delicate about them.

It is difficult to imagine other flat race candidates put under more veterinary surveillance than the Melbourne Cup field.

For instance, Racing Victoria has invested in a $1.3m standing CT horse scanner, one of few in the world, for the early detection and prevention of horse injuries, but this year only three of the horses in the Cup, not including Anthony Van Dyck were regarded as worthwhile recipients.

Bad results will happen on hard tracks. Flemington being doctored could play a bigger role than technology but “irrigation” would create a blast from those who reckon it leads to bias. 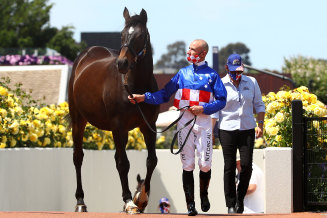 Certainly, the current whip rule, coming under review by the Australian Racing Board next week, needs change. McEvoy hit Tiger Moth 13 times before the 100 metres, eight more than the five permitted, and was fined $50,000 plus a 13-meeting suspension which he is appealing.

To my mind Tiger Moth got an unfair advantage from the McEvoy vigour over Prince Of Arran, who finished 0.2 of a length behind him, yet there was no protest for the added encouragement because there seems to be an unwritten law among stewards that a horses will not be relegated for it.

Does the persuader matter? “We found that whipping doesn’t work, and in particular, whipping doesn’t make horses run any faster,” said Kirrilly Thompson, from the University of South Australia, decreed on the score of a peer-reviewed UK study that debunks the whip being needed to ensure every horse has a fair chance of winning and safety in control.

When it comes to racing I’m more influenced by those in the pilot seat, but is the current rule working? While sympathetic to his plight on Tiger Moth, McEvoy got a vital edge.

“Every time I hit it, it was responding, I got carried away,” Glen Boss told stewards last year over a whip infringement. “I thought I was going to win the race. In the environment we’re in I’ve got to curb it.’’

Anyway Pondus, another import with the Cups-winning connections of part-owner Lloyd Williams and trainer Joseph O’Brien, will have to survive a Werribee preparation, 585kg and the Flemington 2600 metres in the Queen Elizabeth Stakes today. He won’t have Jye McNeil, who counts his whip strikes.

Punters will have to make do with Damien Oliver on him. And recent rain has made Flemington more forgiving.

All eyes on Real Steel at Ascot

St Leger Festival: No fans allowed to attend at Doncaster from Thursday

Golden Horde heading to Ascot next

Spring Confidential: Vets fire up over mortality rate; Hugh Bowman’s annus horribilis
Christophe Soumillon misses Breeders' Cup
Best News
Recent Posts
This website uses cookies to improve your user experience and to provide you with advertisements that are relevant to your interests. By continuing to browse the site you are agreeing to our use of cookies.Ok