Australian all-rounder Ellyse Perry has reinjured her surgically repaired hamstring and will miss the rest of the international series against New Zealand.

Perry, 29, had hoped to resume through the ongoing Twenty20 series but aggravated her right hamstring, resulting in a low-grade strain, in a running session.

She will also miss the three-match one-day international series against New Zealand, beginning on Saturday, but hopes to be fit in time for the Women's Big Bash League, beginning October 25. 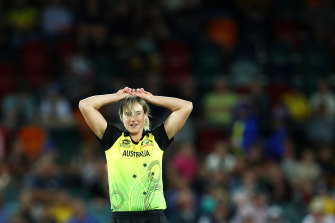 Hamstrung: Ellyse Perry will miss the rest of the Twenty20 and ODI series against New Zealand.Credit:Getty Images

The match-winning star required surgery after she suffered a high-grade tear in Australia's final pool match of this year's Twenty20 World Cup.

Skipper Meg Lanning said on Tuesday that the injury this time was to a different muscle in the same hamstring.

"She is doing everything she can to be available as soon as possible. It's a very complex injury and hard to get the timing on when certain things will happen," Lanning said.

"It's really important to take the time before do we put her out on the field. Hopefully, it's sooner rather than later but we will have to see how it pans out."

Lanning said her long-time teammate was disappointed but had retained a positive vibe among the playing group.

"She will remain with the [Australian] team to continue her rehab and training in the hope of being available at some point during the WBBL," Lanning said.

As Deano’s roommate for his Test debut, I saw first-hand what made him so special

England bowlers work up a sweat amid new coronavirus rules

Pista finishes with a flourish to bag Park Hill prize

‘Be better’: Storm over cricket photo
SuperCoach Racing 2020: Five top contenders for the Epsom Handicap
Best News
Recent Posts
This website uses cookies to improve your user experience and to provide you with advertisements that are relevant to your interests. By continuing to browse the site you are agreeing to our use of cookies.Ok