Hanseatic among stars returning to track

Blue Diamond runner-up Hanseatic will be suited by the small field in Saturday's group 2 McEwen Stakes, according to co-trainer Sam Freedman.

The Godolphin star was favourite for last year's two-year-old feature but finished second to Tagaloa in the Caulfield race. 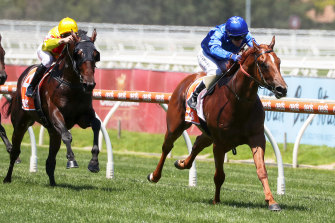 Hanseatic is looking to continue his two-year-old form as a three-year-old this spring.Credit:Getty Images

Freedman said the horse would have the opportunity to show his turn of foot in the 1000-metre weight-for-age race.

"There are some high-speed horses in the race, but it looks like being a small field, so we're satisfied that will suit a horse with his turn of foot," he said.

"He can be keen in his races, but a strong pace should allow him to get into a good rhythm.

"We haven't asked a lot of him in his jump-outs, he's a horse that does well fresh."

Also in the $200,000 race are Brooklyn Hustle, Despatch, Bons Away – for new trainer Wendy Kelly – Bella Vella and Rulership.

The Chelmsford and Tramway Stakes at Randwick on Saturday will provide punters with further form lines this spring heading towards the big races. 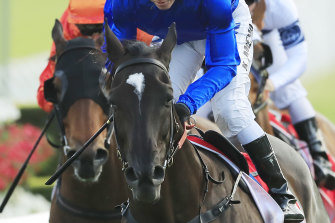 Avilius is among the key runners in Saturday’s Chelmsford Stakes.Credit:Getty

The group 2 Chelmsford sees Avilius line up against the lines of Finche, Shared Ambition, Nettoyer, Angel Of Truth and Zebrowski, who are all heading towards the major Cups in Melbourne.

Meanwhile, the group 2 Tramway will feature Kolding, Dreamforce, Colette, Vanna Girl and Reloaded in a likely precursor to the Epsom.

Saturday's Atlantic Jewel Stakes will provide another guide on the fillies heading towards this year's Thousand Guineas.

The group 2 Furious Stakes at Randwick could also provide a guide towards next month's Thousand Guineas, with the likes of Dame Giselle, Hungry Heart and Thermosphere lining up.

Rising sprinter Masked Crusader has sensationally been scratched from the final race on the card at Randwick, putting a dent in multibets across the country.

A sharp closer into second behind Varda last start put Masked Crusader in black books everywhere, heading towards this year's The Everest.

But a boil was found in the horse's mouth and connections scratched from the race on Friday.

Meanwhile, Arcadia Queen, who was scratched from last week's Memsie due to a foot abscess, won a jump-out at Bendigo on Friday morning and looks on song for a return in the Makybe Diva Stakes.

Taree races: Jeremy Sylvester hoping it will be a Sportsman success story rolling off the presses

Malone Road back in action at Ballinrobe

Doncaster ready to welcome back crowds on Wednesday

Jockeys did not cooperate with police, says informant in Weir case

Australian Oaks winner Colette can defy history this spring
James Doyle to ride Pinatubo in mouthwatering Moulin
Best News
Recent Posts
This website uses cookies to improve your user experience and to provide you with advertisements that are relevant to your interests. By continuing to browse the site you are agreeing to our use of cookies.Ok