‘I didn’t even think’: Smith opens up about controversial ban

Cricketer Emily Smith has opened up about what she has described as the darkest day of her life, when a social media joke gone wrong led to an anti-corruption breach and a heavy suspension from Cricket Australia.

Smith was last summer banned for 12 months, nine of which were suspended, for posting a video of the Hobart Hurricanes' team line up on Instagram from the restricted area of the Burnie stadium ahead of the match against the Sydney Thunder on November 2. 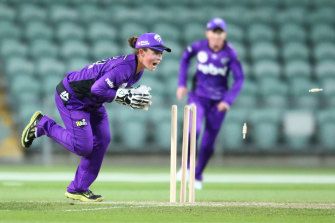 The post came an hour before the official scheduled release of the side. While the contest was later washed out, Smith was still found to have broken anti-corruption protocols even though CA head of integrity and security Sean Carroll said there had been no intent to breach the code for monetary reward.

Then a wicketkeeper and now a reserve player for the Hurricanes, Smith, 25, said the incident had been the toughest time of her life.

"I guess it was. The intention wasn't exactly there and I guess for everything to unfold as it did, it was, obviously, disappointing but I guess that's how things go sometimes, unfortunately," she said.

"It had been raining in the morning and the night before and I guess it was one of those things. You want to stay switched on to play but it was expected that we wouldn't play, which doesn't necessarily change putting the team up on social media. But I guess things were a bit relaxed that day and I guess didn't happen how they normally do. One thing led to another."

One of cricket's more bubbly figures who enjoys "making people laugh", Smith had posted the line up only because she had lost her position at No.9 in the batting order, and was involved in a friendly battle with fast-bowling teammate Tayla Vlaeminck to win back her spot. Then came the chance to film the listed line up against the Thunder and make a "joke" of the situation.

"I was batting at No.9 and we hadn't gone down that far yet [in the season], then Tayla Vlaeminck, after a good net session, was put above me," Smith said.

"I love Tay, she is a ripper. But she was put up and I was creating my own battle in the nets to get pushed back up … it was a bit like: 'I wonder where we are going to be [in the order' in this game?' I was filming it and I didn't even think at the time." 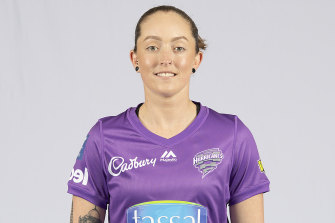 While Smith was ultimately to blame, millions of dollars are bet on the WBBL and players have anti-corruption education, she should not have been in that situation for the mobile phones of all players should have been locked away at that point, as stipulated by the International Cricket Council. But the confusion over whether play would go ahead ultimately led to what Australian Cricketers' Association chief Alistair Nicholson dubbed a "comedy of errors".

"At the end of the day, it is up to us to make sure our phones are locked away. I think every team has a different way of going about it but I definitely should have handed my phone in that day, in particular," Smith said.

The Hurricanes soon reported the breach but Smith didn't think much would come of it, for there had been no intent of corruption. But within days came the dreaded call from Carroll.

"He said: 'You'll be missing training on Thursday'. Then I felt: 'Oh shit, it must be serious'. I flew to Melbourne, had the interview, then I played on the weekend against the Renegades," Smith said.

Smith had ACA executive Kelly Applebee by her side through the ordeal, while Nicholson and ACA chairman Greg Dyer worked assiduously on her behalf in arguing any ban should be fully suspended. Instead, the three months she received meant her WBBL season was over although she was able to return to the field in February for her Melbourne club side, Essendon Maribyrnong Park.

The ban became a flashpoint between the ACA and CA but sources close to Carroll said even he had been surprised Smith had not launched an appeal. Asked whether she had considered appealing, Smith replied: "Yes and no but it was a no in the end – just trying to get it [the ordeal] out of the way."

Prominent past players Isa Guha, Michael Vaughan and Shane Warne were among those to question the penalty but in a sign of good faith Smith was able to have Mel Jones, the Australian batting great and now CA director, as a sounding board.

Through this, Smith took strength from her partner and fellow cricketer Heather Graham and her family and friends.

As part of the punishment, Smith has given anti-corruption briefings to rookie male and female Tasmanian players and the positive feedback has been one inadvertent benefit of a tough situation.

She is keen to reclaim her spot in the XI, taken by New Zealander Rachel Priest, but this much is clear – there is no denying her love of the sport is as strong as ever.

"I still watched every game after that [suspension]. My love for cricket was still there. It didn't tarnish that, that's for sure," Smith said.

TOP SPIN ON TEST: Crawley's Golden Duck was third by No 3 in a year

SuperCoach Racing 2020: The Racing League ambassadors reveal their Round 5 teams
Williams aims for seventh Melbourne Cup triumph
Best News
Recent Posts
This website uses cookies to improve your user experience and to provide you with advertisements that are relevant to your interests. By continuing to browse the site you are agreeing to our use of cookies.Ok