Instinct took over as jockey Jess Taylor lay next to a fence on her property in July – she just started to crinkle her toes.

As someone who rides for a living, she knew that if she could feel her toes, everything would be all right. She was more worried about her pleasure horse, who had just bolted and catapulted her into a fence. 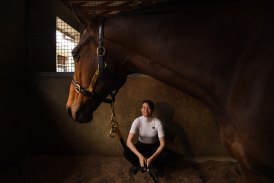 Jess Taylor with Looks Like Elvis, which she will ride in the Epsom at Randwick on Saturday Credit:Kate Geraghty

"I hit the post horizontally and the centre of my back wrapped around it," Taylor says. "I thought, on impact, I have broken my back. I just started thinking can I move my toes? So I kept crinkling them.

"I couldn't breathe much, but once I could move my toes I knew I was ok. I just couldn't do much more and was wondering where my horse was.

"My neighbour heard it happen and called an ambulance straight away for me."

Jess Taylor still has the scars from the fall where she broke her backCredit:Kate Geraghty

The 29-year-old still bears the scars of that day in July but will go from a hospital bed to riding in two group 1s in just two months at Royal Randwick on Saturday. It's a remarkable feat, considering she fractured the wings on her L1, L2 and L3 vertebrae and three ribs in the fall.

"On the ground, I thought what have I done? I wasn't thinking about riding again," Taylor said. "It's funny that fall was the most serious one I have had and it was on my own horse on the farm.

"I have had a couple of race falls and broken my ribs twice, but nothing where I thought I might not ride again.

"Now I'm riding in an Epsom on the best chance I have had to win a group 1. It's amazing."

She will ride a $201 outsider Miss Sentimental in the Metropolitan, but Taylor believes she could get the fairytale finish on Looks Like Elvis in the Epsom.

It is a long way from the couple of days she spent in hospital, and the pain of the injury. But Taylor made sure she was back to trackwork within five weeks.

A month later she will be riding in one of the biggest races in the spring in a sheer show of mental toughness.

"When I got to the hospital I asked how long do I have to have off racing and they said six weeks," Taylor said "That was a lot better than what I thought when I hit the post.

"I just focussed on that. Six weeks and three days later I was riding in a race."

The lightweight jockey was just excited to be back in the saddle. Little did she know as she returned to trackwork at Jarrod Austin's stable that he would pull her aside.

"We were just standing there together at the trials at Rosehill and he [Austin] asked if I had an Epsom ride. He said he had [Looks Like] Elvis and if it got a run would I ride it," Taylor said.

"To go from where I was in July to that conversation was incredible. I just said 'absolutely', so I have been watching him pretty closely.

"Jarrod and I have had a bit of luck together."

The former Queensland joined the Austin stable for the spring and after having no luck in the Show County Quality, he finished on the placegetters' heels when fifth in the Tramway Stakes and last weekend was a game third behind I Am Superman in the Shannon Stakes.

"I thought Jess was the right jockey for him, especially with only 50kg, in the Epsom. I didn't want her to take another ride," Austin said. "When she came back I wanted to tell her but I waited a week."

Taylor has evaluated each run of the preparation and believes Looks Like Elvis is better than his $61 odds.

"His first two runs have been very good. He had no luck first-up. He was good second-up and I thought he did really well considering he was a little wide [in the Shannon] last Saturday.

"He is versatile, he can get back or be on the speed and that's his biggest asset for a big mile at Randwick.

"With no weight on his back I'm sure he will run really well.

"This is the best chance I have had in a group 1 and I'm really excited because I might not have been here."

Frankie Dettori takes over on Mishriff at Deauville

Season could be flipped: CA exploring fixture overhaul for next summer

Group 1-winning jockey Damien Thornton to spend months on sidelines after more fractures found
A field of 94 hopefuls remain in the Melbourne Cup after Tuesday’s first acceptances
Best News
Recent Posts
This website uses cookies to improve your user experience and to provide you with advertisements that are relevant to your interests. By continuing to browse the site you are agreeing to our use of cookies.Ok