‘In the form of his life’: Porte, Matthews ready for world championships

Richie Porte will look to add to a career-defining season at the UCI Road World Championships in Italy on Sunday, one week after becoming only the second Australian to stand on the podium at the Tour de France.

Porte, 35, finished third overall at the Tour de France last weekend and had three days at home in Monaco to meet his newborn daughter before travelling to Imola to join the national team on Thursday.

First-time national team sports director and retired classics specialist Mathew Hayman says Porte is in "the form of his life" as the Tasmanian and former worlds silver and bronze medallist Michael Matthews ready for a rainbow jersey assault. 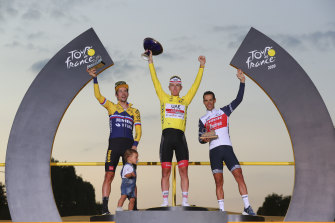 Richie Porte, right, finished third at the Tour de France on Sunday, becoming only the second Australian to stand on the podium after Cadel Evans. Credit:AP

"We've got two guys here that depending on how the race pans out can be there in the final," said Hayman.

"Michael Matthews has a pedigree in world championships. He's been second and he's been third, he's been fourth, he's a very, very accomplished one-day rider. He's talented and can climb on his day.

"It's going to be hard, there is a lot of climbing but often in a world championship circuit race like this that factor, that there is so much climbing, can deaden the race for a while and if he can get to a point when it's almost too late then I think he's a chance. 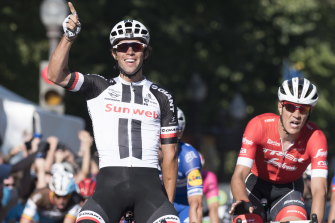 Pedigree: Michael Matthews won silver at the 2015 world championships, was fourth in 2016 and claimed bronze in 2017. Credit:Jacques Boissinot

"And then we've got Richie, who is only the second Australian to stand on the podium in Paris and has come off an amazing Tour de France and is in the form of his life," Hayman continued.

"He seems very keen to be part of this Australian team and give it his best on Sunday and we can use that asset."

Matthews, 30, has been preparing for the Giro d'Italia, which starts next weekend. He won his first race back when the WorldTour season resumed in August after an almost five-month lay-off due to the coronavirus pandemic and will enter the world titles on the back of the week-long Tirreno-Adriatico stage race.

Hayman believes the 259.2-kilometre world championship, to be held over a 28.8km circuit, will play out to favour either classics specialists like Matthews, or climbers like Porte. The peloton will complete nine laps of the course that features narrow, rolling, twisting roads, two main ascents and 5000m of climbing.

The world titles were meant to be held in Switzerland this year, but the hosts were forced to cancel amid the COVID-19 pandemic, leaving cycling's governing body, the UCI, scrambling for a replacement, which they confirmed only on September 2.

The championships are typically held at the end of the season but this year fall the week in-between the Tour de France and Giro d'Italia as part of a revised and condensed WorldTour calendar.

The field for the elite men's road race has effectively been divided into two categories: those that did and those that didn't compete in the gruelling Tour de France.

Hayman, speaking from Imola on Friday, wasn't game to weigh in on whether riders with a three-week Grand Tour in their legs would be more or less competitive.

"I think there is some fatigue that you get from riding the Tour de France mentally and physically and [the world championships] it is very much a one-day race and a classics style, which is going to be fatiguing. If you've just ridden the Tour and you've been through that for three weeks, not just the physical side but just having to always fight for your position and be in the right place at the right time, some of the Tour guys might struggle with that," said Hayman.

"It's always going to be touch and go for a Tour de France rider coming from the Tour to here. You can get it right, or you can just be really bogged down all day. Richie riding GC there … hopefully he gets enough recovery in this week and he's on form but he's looking amazingly fit.

"And Michael … he races very well off limited racing. He … always hits the ground running, so I'm pretty sure he'll be in as good a form as possible."

The elite men's road race proceeds the elite women's road race along the same circuit on Saturday. National road champion Amanda Spratt has been forced to withdraw as she recovers from a shoulder injury and concussion stemming from a crash at the Giro Rosa. Tiffany Cromwell will substitute Spratt in the 144km women's title that features 2750 metres of climbing. 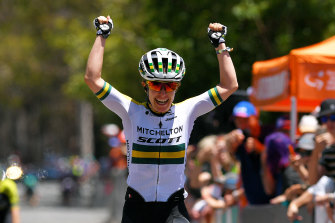 National champion Amanda Spratt has been sidelined from the world titles with concussion. Credit:Velo

"It's a really tough and technical course so I think it can still suit our riders well, so I only wish every bit of success to the girls. My previous worlds success would not have been possible without all of their support so it will be exciting to see chances taken this year to go for a result," Spratt said in a statement earlier this week.

Durbridge will support Porte and Matthews in Sunday's road race, while Dennis will now look to the Giro d'Italia.

India passes farm bills amid uproar by opposition in parliament

No Big Bash for Jofra

Cloak Of Spirits out to shine at Lingfield

Virate Kohli’s wife slams legend after misquote
Russian Camelot wins 2020 Underwood Stakes at Caulfield
Best News
Recent Posts
This website uses cookies to improve your user experience and to provide you with advertisements that are relevant to your interests. By continuing to browse the site you are agreeing to our use of cookies.Ok