Move aside Ricky Ponting, Adam Gilchrist and Matthew Hayden. Australia's world champion women's side has not only set its sights on staying at the top but on becoming "one of the greatest teams that's ever played".

Meg Lanning's side last summer left Belinda Clark's team in its wake and on the eve of this international season has Ponting's all-conquering Australians in their sights. 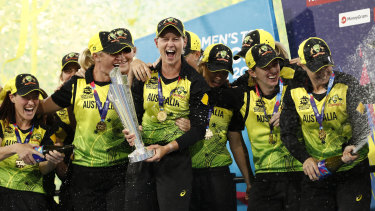 Still cutting deep for today's generation is the failure of 2017 – when they were single-handedly brought down by India's Harmanpreet Kaur.

The loss, which prompted a change in philosophy for the team, still cuts deeply for today's generation, and with the postponement of next year's tournament in New Zealand it will not be until early 2022 when they can atone.

It may be hard to top the fairytale success at this year's T20 World Cup – arguably the highlight of the year for Australian sport and one of the iconic moments for women's sport in this country – but the challenge of greatness is what is driving the team.

"The easy part of playing for this team is everyone has a drive and an ambition to be better, and to continually improve and evolve as players," the world's top-ranked T20 batter Beth Mooney said. 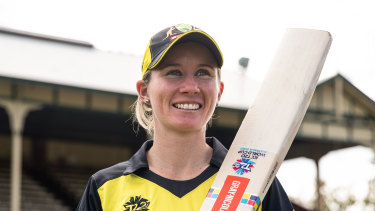 Beth Mooney says Australia wants to be one of the greatest teams of all time.Credit:Cricket Australia

"We're ranked the No.1 team in the world and we have big ambitions to stay there for as long as possible and be one of the greatest teams that's ever played."

Australia take on New Zealand in the first of three T20s, starting Saturday, before the two nations play an ODI series.

"We won the T20 World Cup so there's a target on our back now. New Zealand are a class side so this will be the first challenge that we have in making sure we can be as consistent as possible in these T20s," Mooney said.

"The one-day series, the carrot that's dangling for us is the world record of 21 straight ODI wins. To get some momentum from this series leading into the one-day World Cup will be really important as well – making sure we've got our combinations right.

"It's been well documented the last one-day World Cup didn't go exactly as planned. We'll be definitely gunning for that come February/March 2022."

The cricket world saw first hand how even the international game had become at this year's T20 World Cup when Australia came perilously close to early elimination, first against Sri Lanka then in the final group game against the White Ferns.

"It was a different tournament for us in the sense we were challenged and put under pressure a fair bit.

"At the same time that's a really good indicator for where the game's at around the globe. People are investing in women's cricket.

"To be able to have contests like that at the World Cup means series like this against NZ will be no different. They'll be tightly fought and hopefully we can get over the line against them."

“Too scared” to look at summer schedule

‘There’s no substitute for pace’: Fired up Pakistan ready to test England’s mettle

India building collapse toll climbs to 20, several still trapped
Ex-England ace provides candid reality about cricket's diversity issue
Best News
Recent Posts
This website uses cookies to improve your user experience and to provide you with advertisements that are relevant to your interests. By continuing to browse the site you are agreeing to our use of cookies.Ok