MARTIN SAMUEL: Stuart Broad’s 500-Test wicket milestone is an incredible achievement for someone who it appeared was being ushered into retirement… every stride to the crease shows how much this man cares

December 12, 2007 was the date of Stuart Broad’s first wicket in Test cricket. Chaminda Vaas, the great Sri Lankan quick, was his victim in Colombo.

It is not a great friend to Broad’s type of bowler, Colombo.

Broad got his breakthrough late on day four of a match in which 776 runs had already been scored and which was heading, inexorably, for a draw. 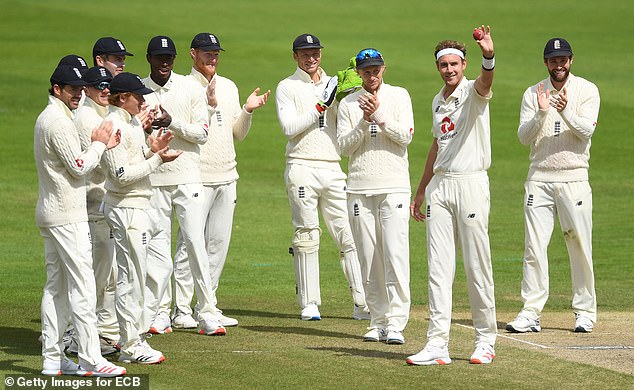 Asked what his target was, back then, as a young man starting out in the game, he was deadpan.

‘At the time, given it was Colombo, I’d have been happy with two,’ he said. Yet we know that Broad did not settle for just the one more on a road in oppressive humidity.

On Tuesday, in chilly, breezy, rainy and sadly empty Manchester, he finally left the biosecure bubble on 501 with no sign of stopping; one of just seven players to reach that incredible milestone, only the fourth fast bowler, and possibly the last, given the way modern cricket schedules are devised.

It is an incredible achievement from a player who it appeared, less than three weeks ago, was being gently ushered into premature international retirement.

Left out of the first Test with the West Indies, many saw the beginning of the end. Maybe Broad, too, given his memories of dark thoughts, playing the role of spare part in Southampton. 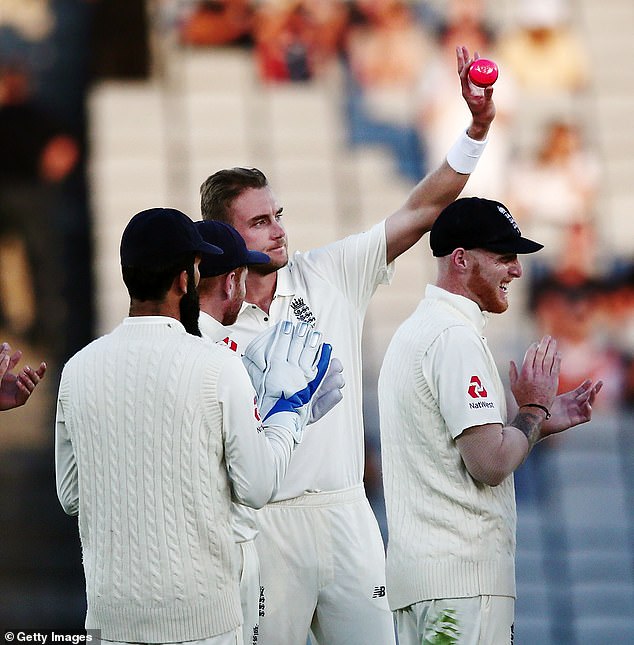 Broad acknowledges the crowd after his 400th Test wicket, that of Tom Latham in 2018 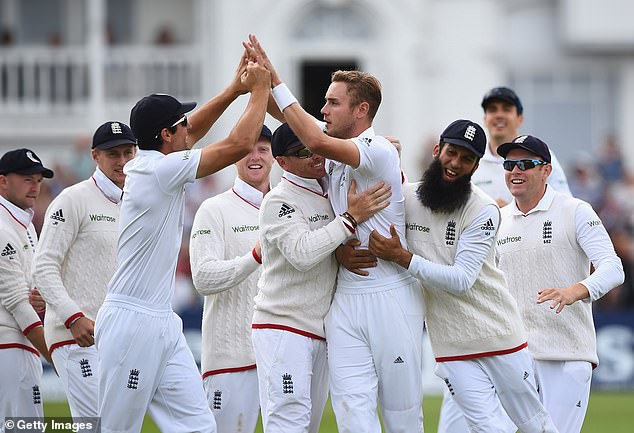 On Tuesday, he was judged as England’s Man of the Series by West Indies coach Phil Simmons, despite having missed a third of it. Certainly he was the man of this Test with a 10 for 67 match haul and a game-changing 62 in England’s first innings.

It was typical Broad. He has much of what the Australians call the mongrel in him and a recall to the Test side was always going to be an invitation to prove a few wrong.

Broad in adversity is a powerful sight. On day one of an Ashes series he had the entire crowd at The Gabba abusing him and emerged the player of the day.

Given the opportunity to show the selectors they had made a terrible mistake, he has spent the rest of the month doing just that.

In this series, feeling wronged, every stride to the crease has been a study in intensity, in how much he cares. Team sport athletes are often sketchy about individual achievements but Broad’s recall of the milestones of his career was almost obsessive.

He was asked to name the first batsman he got out. Well, every bowler knows that. 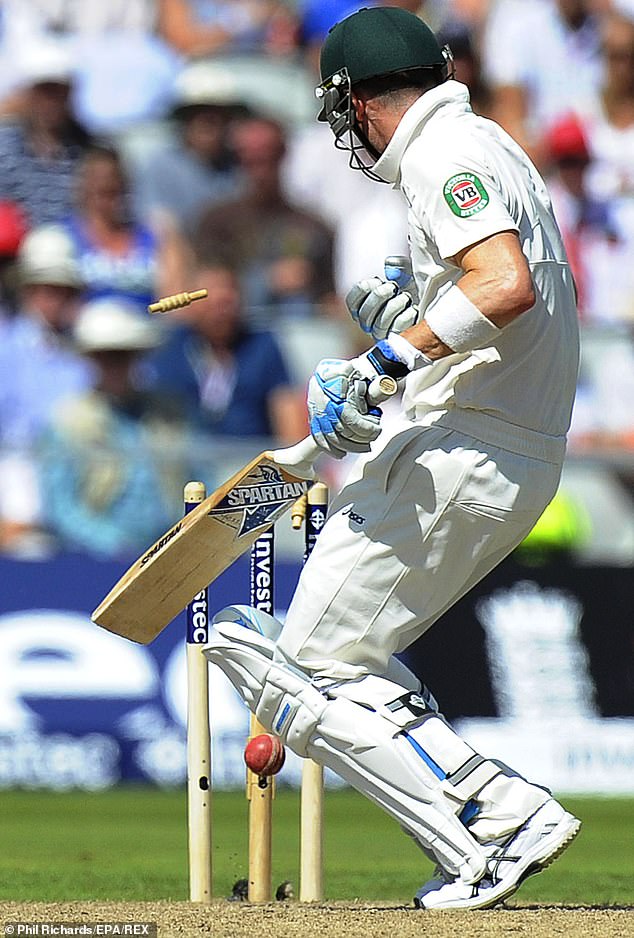 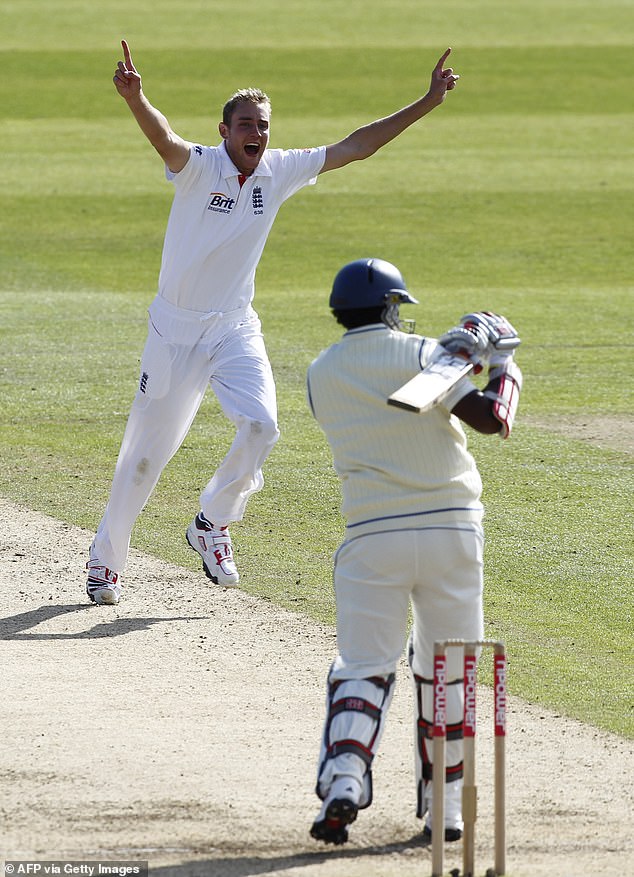 Cricketers have terminology for people like that. Badgers. Tragics. But there was nothing tragic about the pride Broad took in his career. It was all there, the reason he was through 500 and out the other side, already hunting down Courtney Walsh’s 519 Test wickets. Kraigg Brathwaite was Broad’s 500th dismissal on Tuesday, an incredible coincidence given that he performed the same duty for Jimmy Anderson when the West Indies played at Lord’s in 2017.

Broad’s only regret was that he turned round to appeal, rather than making his usual no-look show of confidence.

And if ever he could have got away with that while not being accused of arrogance, it was on Tuesday. Not just because of the occasion. There are small-stoned fruit of the genus prunus that are not as plum as Brathwaite was, trapped back leg lbw.

Yet Broad moved on swiftly, later nabbing Jermaine Blackwood to wrap up the Test and the series in England’s favour, just before bad weather came in.

It was fitting, too, that he should get that last word, despite Chris Woakes’ heroics running through the rest of the team. 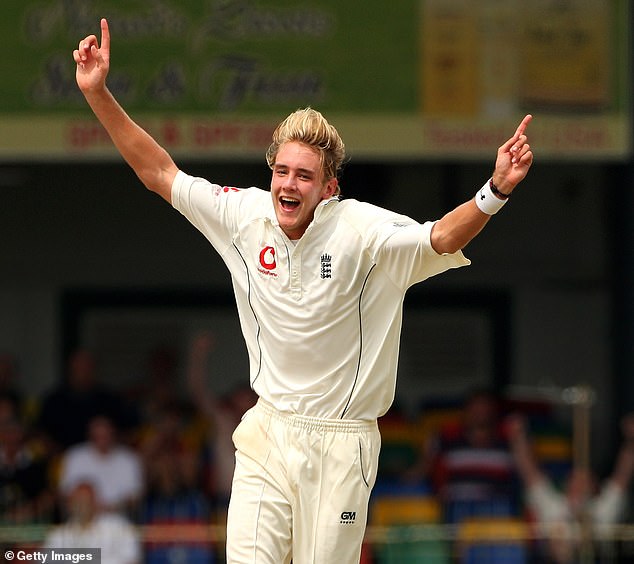 A young Broad celebrates his first ever Test wicket, that of Chaminda Vaas, for England in 2007

There seemed genuine warmth in the praise of his team-mates as gloom enveloped Old Trafford. Shielding beneath an umbrella, Broad watched a montage of tributes, secretly recorded.

‘One of the greatest to ever play the game,’ concluded Ben Stokes, and looking at the numbers it was impossible to disagree.

Some of the finest bowlers of any era are significantly in his wake now: Curtly Ambrose, Malcolm Marshall, Richard Hadlee, who gave him his autobiography during the last tour of New Zealand and signed it with the encouragement to go out and get 500.

And all of this would be testament enough, were it not for the fact that in the last two years, Broad has reinvented himself as a threat to batsmen. He had been in the doldrums. He was economical, but ineffective.

In two years leading up to January 2018 it took him 80 deliveries on average to get a wicket.

On the last Ashes tour he took 11, total. So he changed. He began bowling fuller.

He worried less about getting driven down the ground. He changed his run-up too and determined to make batsmen play as much as he could after consultation with Nottinghamshire’s analyst Kunal Manek. 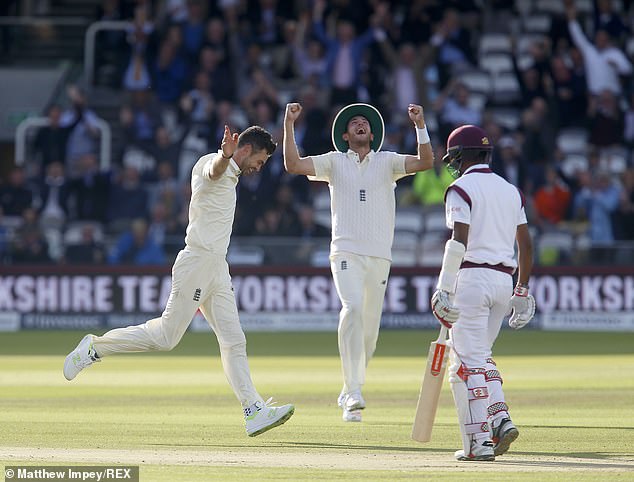 It worked. Right now, Broad is the most prolific wicket taker in the world and has been since that Ashes humbling.

‘It’s easy to get to 34 and think, just keep doing what you’re doing,’ said Broad. ‘But in this team we’ve got so many fast bowlers that if you’re not taking wickets, then you’re not going to play.

‘If you compare my last 18 months to my career record, it’s improving. I feel so fresh, so excited still to play the game.’

Those who have captained him will say that Broad is hard work. He thinks he knows best, his competitive streak is strong and borders on mean at times, he always wants to bowl and he always thinks the batsman’s out.

Who wouldn’t want a player like that in the team? Someone that a captain can throw the ball to at any time, and he will accept the challenge.

Someone who when he gets up a head of steam can run through a team almost at will. Someone who has taken wickets against every country and in all conditions.

Someone who, at 34, is still as motivated as that day in Colombo when he took the first of 501. And counting. Very, very much still counting.

Love is a deserved favourite for the Arc – Dettori

Robin Goodfellow's racing tips: Best bets for Wednesday, July 29
England v West Indies: Jonathan Agnew on series, Stuart Broad & biobubble
Best News
Recent Posts
This website uses cookies to improve your user experience and to provide you with advertisements that are relevant to your interests. By continuing to browse the site you are agreeing to our use of cookies.Ok