German rider Lennard Kämna (Bora-Hansgrohe) was second on the climb up to the Puy Mary, an extinct volcano, at the end of the 191.5-kilometre parcours from Chatel-Guyon. Maximilian Schachmann, also for Bora-Hansgrohe, crossed in third. 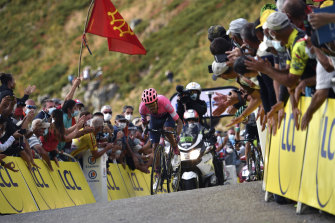 Another Slovenian, Tadej Pogacar of Team UAE-Emirates, is now second overall, 44 seconds off the pace with Bernal in third, 15 seconds further back. Australian Richie Porte (Trek-Segafredo) put in a strong showing, containing his losses to lag 2 min 6 secs of the yellow jersey pace.

Cloak Of Spirits out to shine at Lingfield

Family leave: Weary stars may be given time off, says Langer

Limato bids for more Park Stakes glory
Ben Curtis free to resume riding on Saturday
Best News
Recent Posts
This website uses cookies to improve your user experience and to provide you with advertisements that are relevant to your interests. By continuing to browse the site you are agreeing to our use of cookies.Ok