Australian players on tour in England who will take part in the Indian Premier League are likely to have to quarantine in the United Arab Emirates with some even having to wear ring monitors when they leave their hotel rooms.

Stars including Steve Smith, David Warner and Josh Hazlewood had hoped to avoid quarantining ahead of the IPL, having already been in a bio-secure bubble through the white-ball series in England, but that appears dashed.

Chennai Super Kings assistant coach Eric Simons has given an insight into what the Australians can expect upon landing via a chartered plan on September 17, just two days before the world's richest Twenty20 league starts. 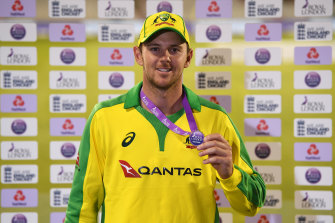 "We are hearing – although it's not confirmed yet – that they will also have to self-isolate in their rooms for six days and produce negative tests on the first, third and sixth days before they can join us," Simons, the former South African coach, wrote in his column on Manners on Cricket.

"We had hoped that they could all move from their current bio-secure bubbles into ours but it seems likely that there will be no 'leniency', which is understandable. Apart from our brilliant Indian players, led by the ageless MS Dhoni, we do have Shane Watson, Faf du Plessis and Lungi Ngidi in full training so there's no shortage of talent."

Hazlewood, as is the case with the rest of his teammates, will also have to don a smart ring personal health tracking device.

"We were issued with tracking devices to be worn around our necks whenever we left our hotel rooms but our physiotherapist has been very creative in turning them in to 'watches' so at least that doesn't feel restrictive," Simons said.

The Super Kings had reported 13 cases, including two players, of COVID-19 last month, prompting Hazlewood to say it was "obviously a little bit of a concern".

The majority of the 200 players from the eight teams arrived last month and spent six days in isolation in their hotel rooms. Simons said he had undergone five COVID-19 tests.

The IPL will conduct more than 20,000 tests through the tournament, which is likely to be held without crowds. There will be 24 matches in Dubai, 20 in Abu Dhabi and 12 in Sharjah.

CA reaches out to victims of racism through new series

Australia dismantle England after Hazlewood’s stellar performance
Rothfire thumps them as Robert Heathcote blasts Hugh Bowman – ‘That was insanity’
Best News
Recent Posts
This website uses cookies to improve your user experience and to provide you with advertisements that are relevant to your interests. By continuing to browse the site you are agreeing to our use of cookies.Ok