The bottom-of-the-table Melbourne Renegades have upset their arch rivals and ladder leaders the Melbourne Stars in the WBBL, winning in a super over on Sunday.

Lizelle Lee and Courtney Webb hit 16 off Natalie Scriver's wayward super over, with Lizelle Lee smashing a four and a six of the first and fifth ball to guide her team to the win. 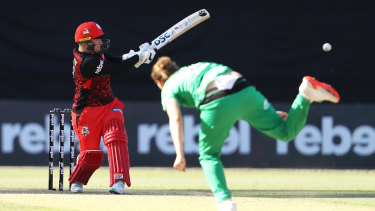 Lizelle Lee hits a boundary during the super over to guide the Renegades to victory over cross-town rivals the Stars.Credit:Getty Images

Stars batters Meg Lanning and Mignon du Preez needed a six of the final ball of Sophie Molineux's super over but could not do so, meaning the Renegades are still mathematically in with a chance of making finals.

The super over came after a knock of 41 (29) by Meg Lanning and 40 (29) by Mignon du Preez which set up the Stars' imposing total of 8-165. It was finished off with heavy hitting by Alana King at number seven, who smashed 27 from 12 deliveries after a mini fightback by the Renegades.

That fightback was sparked by 17-year-old spinner Ella Hayward, who tore through the Stars to get her debut WBBL wicket on her way to figures of 4-16.

Courtney Webb was pivotal to the Renegades chase with 54 off 33, and scored a crucial two off the final ball to force the super over. The Renegades had needed eight from the final over. 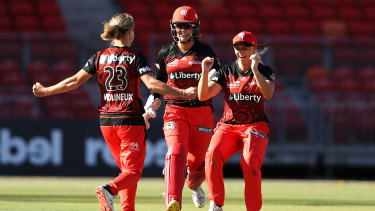 Ellyse Villani saved a four brilliantly on the third ball of the final over, effectively meaning the Stars could get to the super over.

Lizelle Lee began the Renegades run chase strongly with 28 off 17, but was bowled by Sophie Day to bring their score to 2-35.

Josie Doolie’s 36 off 31 balls was important at number three and through the middle of the innings with Carly Leeson (11 off 7) and Amy Yates (17 off 11) supporting Webb’s anchoring knock.

Yates holed out late in the 18th over to give the Stars a sniff, with the Renegades needing 13 off 14 balls to win. Her replacement Molly Strano was bowled by Natalie Scriver for 2 in the 19th over.

As Deano’s roommate for his Test debut, I saw first-hand what made him so special

Trainer Archie Alexander is hopeful Kiwia can win his third straight Ballarat Cup
The Shunter swoops for Greatwood glory
Best News
Recent Posts
This website uses cookies to improve your user experience and to provide you with advertisements that are relevant to your interests. By continuing to browse the site you are agreeing to our use of cookies.Ok