Victoria's jockey ranks have never been more competitive and few have learnt the hard way as Melbourne Cup-winning rider Michael Rodd has over the past six months.

At the peak of his powers, there were few riders in the country as dominant as Rodd before he left for Singapore in late 2014. 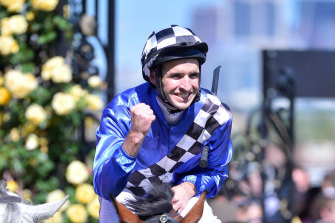 Michael Rodd hopes a win in Saturday’s Turnbull Stakes could reignite his career in Melbourne.Credit:Pat Scala

A Scobie Breasley medallist in 2013, Rodd rode 34 group 1 winners in Australia and New Zealand – including 13 in three-and-a-bit seasons – before he made the biggest move of his career.

But since returning to Melbourne in May it's been tough going for the 38-year-old as he looks to build new connections in a much-more competitive racing landscape.

On Saturday, he partners again with Master Of Wine, this time over a more suitable 2000-metre trip in the Turnbull Stakes, and Rodd hopes a group 1 win could be the kickstart he needs to reignite his career.

"It obviously would help winning a group 1 race to put your name back in the lights," Rodd told The Age.

"Things have been a little bit quiet for me so of course it would help.

"I was warned it was going to be tough before I came back by a few of the guys and it hasn't been easy; I don't really have a main stable to feed off so the rides come sporadically.

"But I'm happy with the way I'm riding and everything I'm riding is getting its chance so that's all I can do."

Master Of Wine was an eye-catching fourth in the Makybe Diva Stakes, finishing behind Fierce Impact and Russian Camelot – neither of who will line up in Saturday's Turnbull. 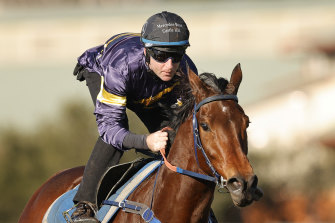 Master Of Wine, ridden in trackwork by Tommy Berry, is one of the leading hopes in Saturday’s Turnbull Stakes.Credit:Getty

Instead, the race will feature weight-for-age star Verry Elleegant and boom Cup hope Surprise Baby, but Rodd believes his Hawkes-trained galloper is ready to run to his best.

"His run in the Makybe Diva was outstanding off a slow pace. He just got a little flat footed but he was very strong through the line. Going to 2000 metres is obviously going to suit him.

"He drew awkward in the Makybe Diva and I rolled forward. I was deep but I was with cover.

"I had Russian Camelot outside me but hopefully from barrier four we can get that one-off position and hopefully there's a little bit more pace for him but he's going really well. He's a quality horse and this is the perfect race for him."

Synonymous with champions of the past such as Atlantic Jewel and Efficient, getting rides in the big races this year won't come easy for Rodd.

He's already secured a nice ride in the Caulfield Guineas on John Thompson's Mamaragan, but weight is likely to stop him from sticking with Master Of Wine in the Cups. 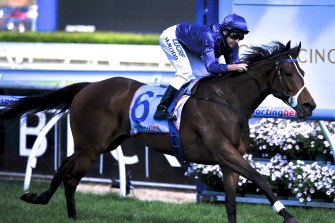 "It's a little bit on the light side for me so he'd have to win and get a penalty for me to ride him."

But a win on Saturday, which would be his first Australian group 1 victory since saluting on Bonaria in the 2014 Myer Classic for Pat Hyland, could be the catalyst for more opportunities this spring.

"It's a hard environment at the moment, Melbourne, and very hard to pick up rides in group 1 races, and I've got my opportunity on Saturday."

Silverwood reveals Rashid will be given chance to make Test comeback

SuperCoach Racing 2020: Five top contenders for The Metropolitan
Mick Price and Michael Kent Jr will test three fillies in Saturday’s Group 2 Edward Manifold Stakes
Best News
Recent Posts
This website uses cookies to improve your user experience and to provide you with advertisements that are relevant to your interests. By continuing to browse the site you are agreeing to our use of cookies.Ok