Test opener Joe Burns will be desperate for a significant score while prodigious young talents Cameron Green and Will Pucovski will go head to head with higher honours possibly on the line in the final round of pre-Christmas Sheffield Shield matches, beginning on Sunday.

Incumbent Test middle-order left-handers Travis Head, 26, and Matthew Wade, 32, used round three of the campaign in Adelaide to shore up their positions in the XI for next month's blockbuster series against India, while Mitchell Swepson intensified his bid to be Nathan Lyon's sidekick with match figures of 10-171 – the first 10-wicket haul of his career – despite Queensland losing by one wicket to NSW. 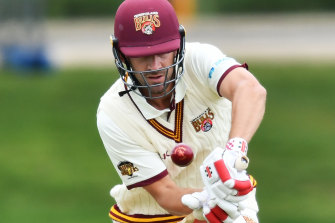 In doing so, Swepson became the first Bulls' leg-spinner to achieve such a feat since Trevor Hohns – now Australian cricket's chairman of selectors – in 1978-79.

While Swepson dominated, Burns, 31, appears vulnerable with returns of 29 and 0 against the Blues. He fell to a short ball in the first innings when caught in the deep by wicketkeeper Peter Nevill, and in the second nicked a lovely Trent Copeland outswinger before scoring. He made only seven in the Bulls' opening clash, against Tasmania.

Upon his recall to the Test side last summer, Burns was unable to cash in against Pakistan and New Zealand. He began strongly with 97 against Pakistan in front of his home fans at the Gabba but passed 50 only once more in seven innings. All up, he made 256 runs at a modest average of 32. Australia has not played a Test since.

Former Australian captain Mark Taylor maintains Burns will be picked for the series opener under lights in Adelaide but remains vulnerable until he can post a big score against India. Selectors are expected to announce the Australian squad soon after next week's matches are completed.

In his favour, Burns will get the chance next week to feast on a South Australian attack that had no idea on how to tame Victorians Marcus Harris and Pucovski, each celebrating double centuries while sharing in an opening stand of 486 – a record stand for any wicket in the 128-year history of the Sheffield Shield.

That an expanded Test squad of about 17 will be needed as part of the constraints of a campaign in a bio-secure bubble will strengthen Pucovski's hopes. While his previous four centuries had been at No.3, Pucovski has made it clear he is happy to open and Victorian selectors are aware of his ability to blunt the new ball and thirst to bat for long periods. He was drafted into the Test squad against Sri Lanka two years ago but did not play a match.

Head, resuming on 104 on Monday, was dismissed just after lunch for 151 in a draw with the Vics, this following on from his unbeaten 171 against Tasmania last week. Wade made 83 in Tasmania's first innings, his first Shield knock of the summer, and backed up with an undefeated 57 on Monday.

In an enticing match up, Pucovski and Green, the Western Australian, could go head to head when their two states meet at Karen Rolton Oval from Sunday. Green's strong start to the season has heaped pressure on Wade and Head, while also leading to the all-rounder being elevated into Australia's white-ball squad to face India, but his good form did not continue in WA's clash against the Tigers.

He made seven in the first innings and was dismissed for 36 on Monday, having attempted to clip Peter Siddle through mid wicket only to deliver a leading edge to mid off. Green also returned to the bowling crease in this match for the first time since November because of back problems and delivered 12 overs.

He is in the mix to make the Test squad and should he shoehorn his way into the XI, Taylor wants him slotted in at No.6 as a batting all-rounder and used in the mould of Shane Watson.

Meanwhile, Pat Cummins will not make a final call on whether he plays in the Big Bash League until he returns from the Indian Premier League. Steve Smith and David Warner have already declared they will not take part but Cummins' management say he wants to discuss the situation with fiancee Becky and assess the year ahead before determining whether he wants to join yet another bio-secure bubble. Cummins has been confined to a bubble since Australia's white-ball tour of England in September.

Wyong races: Why a maiden win for Pia Sofia will mean so much to Ron Quinton

SuperCoach Racing 2020: The Racing League ambassadors reveal their Round 1 stables

Enbihaar back to defend crown in Lillie Langtry

Tour Down Under cancelled for 2021
Melbourne Cup race by race tips: Best bet of the day is in race five
Best News
Recent Posts
This website uses cookies to improve your user experience and to provide you with advertisements that are relevant to your interests. By continuing to browse the site you are agreeing to our use of cookies.Ok