Stars quick glad to be free after ‘rubbish’ quarantine

Having been stuck in hotel quarantine in Adelaide for 17 days, in an ideal world Katherine Brunt wouldn't then have to cool her heels for another afternoon.

But the England and Wales Cricket Board's conservatism has won out, and the veteran England quick's Melbourne Stars debut will be delayed for a day. 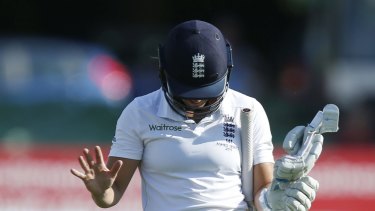 Brunt, 35, has been left out of the Stars' squad for Sunday's clash with the Melbourne Renegades as the WBBL – taking place entirely in Sydney this season – begins.

Her fiance Nat Sciver, who was also signed by the Stars during the off-season, has been included but the all-rounder will only be allowed to bat.

New Zealand's Rosemary Mair has been called up to replace Brunt, but Brunt is adamant she will be right to go in Monday's game against Sydney Thunder.

The need for Brunt to be cautious stems from an unfortunate event earlier this year. 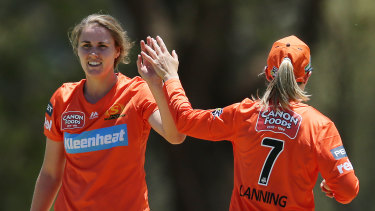 "When I was back in England, they're 99 per cent sure that I had COVID back in March-April," Brunt said on Saturday.

"I had three weeks of being really ill. I had about three months before I started bowling again. My build-up took a bit of a hit to my body."

Brunt left quarantine in Adelaide a week ago. She isn't glowing in her assessment of the experience.

"Our meals were laid out for us. The food was just really sad. It was just rubbish. A chicken sausage in the morning that looks like it's raw. So after a few days we gave in and just started having Uber Eats, we couldn't hack it anymore. We had a little balcony, and we were hoping that would be a really good thing if we could have a bit of a sun during the day, but we had no sun, we were on the wrong side of the building.

"Me and Natalie have done three bio-secure bubbles before we got here. If you include quarantine, this will be our fifth."

However, it wasn't all bad. Brunt – who crossed from the Perth Scorchers – and Sciver – who has played previously for the Stars – managed to find a novel way to prepare for the season.

"CA were really good to us," Brunt said.

"They sent us a treadmill before we got there, and a couple of free weights. We kept busy most days doing some gym work and fitness, just trying to keep match-ready, bowling into mattresses, throwing targets at mattresses."

Brunt said her and Sciver's decision to sign with the Stars was a result of Cricket Australia's rule barring more than two overseas players from the same country playing in one team. Compatriot Amy Jones remained with the Scorchers.

Brunt said she "really hates" the rule. But she was full of praise for the way CA has set up the WBBL village in Sydney's Olympic Park.

Heat is on in WBBL `Village’

WBBL06: Who will win? Who are the international players, the stars on show and players to watch?
Nuts Well springs Old Roan surprise at Aintree
Best News
Recent Posts
This website uses cookies to improve your user experience and to provide you with advertisements that are relevant to your interests. By continuing to browse the site you are agreeing to our use of cookies.Ok