Richie Porte is outside a COVID-19 testing centre in Monaco. He has just undergone his sixth test for the virus in three weeks. It is a week out from the 2020 Tour de France.

Porte, Australia's best overall hope in the Tour as co-leader of the American Trek-Segafredo team, is uncertain how the race will play out amidst the global pandemic. 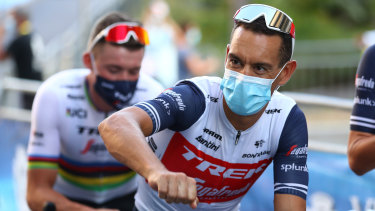 In common with most sporting events in 2020, COVID-19 led to the postponement of the Tour – first from June 27 to July 19, then to August 29, and Saturday's start in the Mediterranean city of Nice.

Despite the optimism of the Tour's owners, Amaury Sports Organisation (ASO), there remain grave concerns that even if the Tour starts, COVID-19 will prevent the race from finishing on schedule in Paris on September 20.

Porte was reminded of that possibility last Saturday, by the person who tested him for COVID-19. As the 35-year-old – who is set for his 10th Tour – told the Sydney Morning Herald and The Age, "He said, 'I'm testing a lot of cyclists. The numbers are going up. I don't know if it's a good thing [the Tour] happens.'"

Porte understands such misgivings, despite the strict protocols put in place by ASO to avert an outbreak. The fact is that the Tour's fate will remain in the balance every day it continues, with France reporting more than 3,000 new cases a day and currently experiencing a surge, with a near-record 6111 cases reported on Thursday. The country's death toll since the pandemic broke is now more than 30,000.

Outside of the race, the 22 teams of eight riders and 22 staff will operate in tightly controlled bubbles. Fan and media access will be strictly limited.

Organisers will kick teams off the tour if too many members test positive to COVID-19, but have not specified how many. Four members of Lotto-Soudal were sent home on Friday (two team members with positive tests and their roommates) but the team will start.

French media report that a team will be removed if two riders test positive.

"It only takes someone to come into contact [with COVID-19] and the dream's over if two guys test positive," says Porte.

Many professional sports have now resumed competition under strict biosecurity measures. But unlike sports such as the football codes, which can be held in hubs, road cycling is constantly on the move.

Protocols have largely worked since racing resumed on August 1. The biggest hurdle for the Tour is its three-week duration and long distance – the route will cover 3,477 kilometres. There are genuine and rational fears that health measures will be breached – even inadvertently – as fatigue builds.

But the Tour is resilient. Since its inception in 1903, the race has been cancelled only twice, both times due to world wars. Sure, there have been threats of stoppages caused by the protests of public groups – and sometimes by a peloton upset over race conditions.

There was talk of stopping the Tour in 1998 after the Festina team was expelled for doping and six other teams withdrew. The 2016 Bastille Day terrorist attack in Nice almost brought the race to a halt. Last year, a hail storm stopped stage 19 on the Col de l'Iseran in the Alps, virtually locking in the final overall result. But the Tour continued. 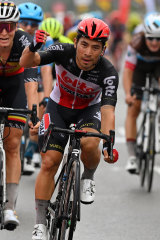 This year is different. The global COVID-19 pandemic is a threat unlike any the race has faced. But if the 2020 Tour can survive the threat, it has the hallmarks of being a thriller; especially considering the uncertainty of riders' form off a limited preparation. In lockdown, most had no option but to train on stationary bikes.

There are nine stages for sprinters, like Australian Caleb Ewan, who won three stages last year. The form of he and Porte form augurs well for Australian fans in a Tour that will have a low Australian representation. Should Ewan and Porte be the only Australians, it will be the lowest number since 2001 when Stuart O'Grady and Brad McGee were the sole starters. This year, not even the Australian Mitchelton-Scott team will have an Australian rider in it.

While sprinters like Ewan could vie for the race leader's yellow jersey in stage one in Nice, the overall tussle will be between the pure climbers, of which Porte is one. The route includes 29 mountains in the Alps, Pyrénees, Massif Central and Jura, with four summit finishes, and the one time trial on stage 20 finishing at La Planche des Belles Filles.

Key will be the rivalry between the British Ineos-Grenadiers and Dutch Jumbo-Visma teams. Ineos-Grenadier has left out English four-time winner Chris Froome and Welshman Geraint Thomas, who won in 2018 and was runner-up last year. The team will be led by last year's Tour winner, Colombian Egan Bernal, with Ecuador's 2019 Giro d'Italia champion Richard Carapaz as back-up. Leading Jumbo-Visma will be Vuelta a España champion Primoz Roglic, of Solvenia, and Dutch 2017 Giro winner and 2018 Tour runner-up Tom Dumoulin.

Porte, who will miss the birth of his second child during the Tour, will share team leadership with Dutchman Bauke Mollema. Off contract and linked with Ineos-Grenadiers, his aim is to better his best overall finish of fifth in 2016, and to claim his first individual stage win.

"It may be the last year I can go to the Tour, to try to win a stage, or do something for myself," he says.

‘Be better’: Storm over cricket photo

Top trainers welcome Ladbrokes Trophy prize-money news
The top 10 contenders who will fight to wear the yellow jersey in Paris
Best News
Recent Posts
This website uses cookies to improve your user experience and to provide you with advertisements that are relevant to your interests. By continuing to browse the site you are agreeing to our use of cookies.Ok