Dean Jones has his flaws, but mean-mindedness was not one. In England in 1997, Mark Taylor was on the verge of the ignominy of being dropped while Australian captain. He was all out of runs and friends.

Jones and Taylor were not close and Jones – who was retired and captaining Derbyshire in a match against the Australians – might have been expected to join the pile-on. Instead, he said: "The number one job for the Australian captain is to make sure they win, play the game in the right spirit and are entertaining. Has Mark Taylor done that? I believe he has." That was Deano for you.

You would like to think that something of that generosity of spirit transmitted itself to the Australian cricket public and explains Jones' immense popularity in his playing days, subsequent media career and the worldwide outpouring of grief now in the hour of his untimely death. 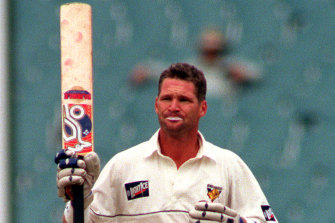 The late Dean Jones, pictured at the MCG in 1996, answered to “Legend”.Credit:Penny Stephens

More probably, it is simply that "Deano" was in his prime the single most entertaining Australian batsman, a master of one-day cricket when that format was at its zenith, with a smear of zinc cream under his bottom lip that was the universally recognisable hallmark of his showmanship.

It might also be that for a stretch of nearly two decades until Shane Warne arrived, Jones was the only significant Test cricketer produced by Victoria. As can be seen again now, in our federation, these things matter. When he was eased out of Test and one-day teams, he became the MCG's martyr.

Jones himself was a kind of federated body. In one-day cricket, he broke new ground, namely a metre or so down the pitch, even to fast bowlers (and despite no helmet). The ultimate exposition of his ways was a fizzing century against England at the Gabba that seems to have lodged itself permanently – and blessedly – in YouTube's algorithms. 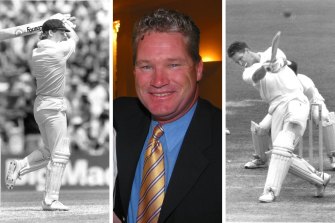 The loss of Dean Jones has been mourned worldwide. Credit:Getty Images

The same batsman toughed it out for hours when faced with grievous bodily harm on debut against the West Indies at Port of Spain in 1984, and in the insufferable clamminess of Chennai in 1987 batted until he had so little left he had to be taken to hospital on a drip. His double century coach Bob Simpson said it was the greatest innings played by an Australian.

He would have been a natural at T20 cricket if it had been around, and later made himself an authority on it.

Jones did not hide his light under a bushel. He was eternally chatty and always forthright, but never diplomatic, and so got into regular spats – with teammates, opponents, coaches, selectors, administrators, media – and mostly got out of them again. He did not hold grudges.

He had a well-developed ego. Early teammates were being ironic when they gave him the epithet "legend". He made it live. Throughout his career, contemporaries would note the latest turn of events and roll their eyes and exclaim: "That's Deano for you." None the less, most would find themselves endeared.

But Jones was humble in the face of legends paramount. His celebrations after making 184 against England in a dead rubber at the SCG in 1987 were too much for Allan Border, who rebuked him thus: "You can be as happy as you like, but we've lost the Ashes again." Jones never forgot, and often told the story against himself. It moved his career into a new key. He would have followed Border into war.

Jones was forever brimming and bubbling with original ideas. He was like that when I first met him as a teenager new to the Carlton first XI, as absorbed by a mid-week 40-over match on a farflung suburban ground as he later would be by a Test match or a World Cup final, and the flow did not dry up in is post-playing years until it was suddenly and shockingly staunched on Thursday.

As a player, at least he got warning of the end. In his ever ticking mind, he saw it coming. He had been part of a speculatively picked youthful cadre that under Border had hauled Australian cricket up by its bootstraps, but now an even younger cohort was arriving.

One night late in 1992, he predicted to this correspondent the order of the turnover that would ensue, and he was proved right. Eighteen months later, aged 34, in a rare moment of obvious public glumness, he retired. He was probably too young then; he certainly was now.

But it was not retirement so much as a change of forums. He swapped the dressing room for the media box, one form of expression of the game for another. As in the team room, so in the media, you knew when Jones was about, and where he was coming from. But unlike some, he talked with other media, not down to them. He was strong in his convictions, but not high-handed about them.

The restless energy that was evident in his batting rippled through the rest of his life. One of his retirement plans, never realised, was to play pro golf on the seniors circuit. The likeliest place to find him when calling was on a putting green, working his way through another basket of balls and theories.

He was forever analysing and scheming, in big picture and small. It meant young players even in recent times took him into their confidence, but administrators held him at wary arm's length. It's almost certainly why he did not land the Victorian coaching job he long coveted.

Jones was steeped in the game, but not hidebound by it. Nothing was sacrosanct in his thinking, not even the number of stumps. He is a huge figure of Sheffield Shield history, but would have scrapped this season's competition in its pandemic-pinched circumstances for a longer term good.

Two days before he died, he spent an hour-and-a-half on the phone from India to his old Victorian teammate and wicketkeeper Darren Berry, turning the cricket world over and over. Marcus Stoinis' ears might have burned, pleasantly.

The thread around which the many Joneses cohered – his constitution, if you like – was not hard to identify. It was an unquenchable love of the game that was almost buff-like in its intensity, but leavened by an ever-present twinkle in his eye. That was Deano for you. He was still full of that love and its flowering in Mumbai this week, and if there is the merest blessing in this awful moment, it is that the love did not die before he did.

NASSER HUSSAIN: Ali's adjustment means he has got it right in England

‘We are broken’: Daughters pay tribute to Dean Jones
Dean Jones’ daughter’s heartbreaking post
Best News
Recent Posts
This website uses cookies to improve your user experience and to provide you with advertisements that are relevant to your interests. By continuing to browse the site you are agreeing to our use of cookies.Ok