‘We are broken’: Daughters pay tribute to Dean Jones

The grieving daughters of Dean Jones say their "hearts are broken", as tributes pour in for the former Australian cricketer who died of a suspected heart attack.

Isabella Jones, who also calls herself Augusta, her full name being Isabella Ruby Augusta Jones, paid tribute to her father in an emotional post on social media.

"I cannot believe I am writing this," she wrote.

"My heart is broken. My Dad. My Hero. The sweetest and most caring person you could ever meet. 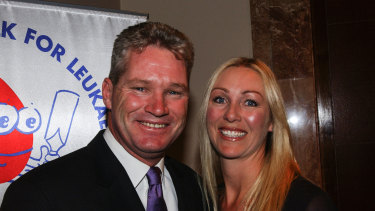 Jones' wife Jane has been left devastated by her husband's death. She had received a call from the Australian High Commission in India which will help with the logistics of bringing Jones' body back to Melbourne.

Isabella and Phoebe were close with their father, and there are regular social-media posts of the family. He dedicated his 1994 autobiography Deano My Call to Jane and Phoebe, before Isabella was born.

"Who knows what would have happened to me if you weren't part of my life," Jones wrote.

Jones also has a son, Kobe, from another relationship.

Tributes have poured in for the batsman, who was one of the most popular Australian cricketers of his generation.

"Shocked to hear about the tragic loss of Dean Jones. Praying for strength and courage to his family and friends," India captain Virat Kohli wrote on Twitter.

Sachin Tendulkar played against Jones in his first Test tour of Australia in 1991-92.

"Absolutely heartbreaking news about Dean Jones passing away. A wonderful soul taken away too soon. Had the opportunity to play against him during my first tour of Australia. May his soul rest in peace and my condolences to his loved ones," Tendulkar tweeted.

"If you look back at the Australian one-day side of the mid-80s, it was based on David Boon and Geoff Marsh at the top, then Deano would come in at number three and his job was to up the ante, and he did it brilliantly," Taylor said.

"He was fearless at times, he was one of the few guys prepared to charge the fast bowlers, which wasn't seen as the thing to do back then.

"I recall him taking apart Richard Hadlee one day in New Zealand, he smashed him all over the park. Prior to Deano coming along, the number three was an accumulator, but he took it to a new level."

Former Australia captain Steve Smith posted his tribute accompanied by a picture of Jones batting without a helmet during the 1992 World Cup.

"Awful to hear the news of Dean Jones passing away in Mumbai. He was a wonderful player for Australia and he will be missed. My thoughts are with his family. RIP Deano," Smith wrote.

Star batsman David Warner wrote: "I can’t believe this news. So very sad to hear about this. Rip Deano, you will be missed."

Australia can learn a lot from England after collapse in second ODI, says Adam Zampa

‘Bats on Sunday, sells all week’: How Dean Jones launched Kookaburra into the sky
Vale Dean Jones, still with so much to give
Best News
Recent Posts
This website uses cookies to improve your user experience and to provide you with advertisements that are relevant to your interests. By continuing to browse the site you are agreeing to our use of cookies.Ok