Trainer Dermot Weld has admitted that his success with Tarnawa in the Breeders’ Cup Turf at Keeneland on Saturday evening was tinged with sadness as he thought of his late stable jockey Pat Smullen.

Smullen passed away this year after a long battle with cancer and it was Irish champion jockey Colin Keane who rode the Aga Khan-owned winner.

Weld said: ‘The only aspect of the great victory that was sad was thinking how much Pat would have enjoyed riding Tarnawa. 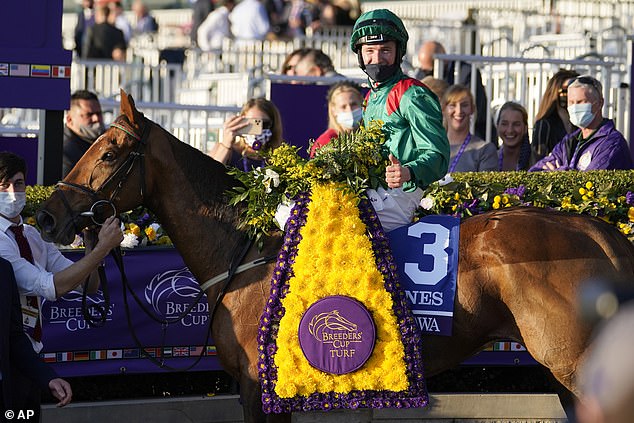 ‘They were basically made for each other because she’s a tough filly and a classic stayer with speed. She’s the sort of horse that Pat rode exceptionally well.’

Tarnawa is now favourite for next year’s Prix de L’Arc de Triomphe but Weld said no decision had been made about whether she would race on in 2021. Tarnawa’s win topped a magnificent night for the Europeans in Kentucky with success for James Fanshawe-trained Audarya in the Filly & Mare Turf, Kevin Ryan’s Glass Slippers becoming the first ever European winner of the Turf Sprint and O’Brien’s unconsidered 40-1 shot Order of Australia leading home a stable 1-2-3 in the Mile from Circus Maximus and Lope Y Fernandez.

It was the first time in Breeders’ Cup history that Europeans have won all four Turf races on day two. Wins for French champion jockey Pierre-Charles Boudot on Audarya and Order Of Australia throw weight behind the argument that he is riding better than anyone in the world.

But it was a painful night for Christophe Soumillon, who would have ridden both Order of Australia and Tarnawa but tested positive for Covid-19.

Frankie Dettori opens up on plane crash that nearly killed him

BUMBLE ON THE TEST: Jason Holder is off the mark

Moore to quarantine ahead of Irish Champions Weekend

Roglic seals second consecutive Vuelta a Espana victory
Victorian batting dynamo Will Pucovski scores first back-to-back 200s in the Sheffield Shield for 20 years
Best News
Recent Posts
This website uses cookies to improve your user experience and to provide you with advertisements that are relevant to your interests. By continuing to browse the site you are agreeing to our use of cookies.Ok