Melbourne Cup is traditionally party time for all of Victoria – a public holiday for a race day steeped in the lore, history and culture of the state.

But the man who is nowadays most associated with the great race, owner Lloyd Williams, has for years eschewed the fun, frivolities and festivities at Flemington, watching the event and its build up in splendid isolation at home on the couch.

This year we are all Williams. 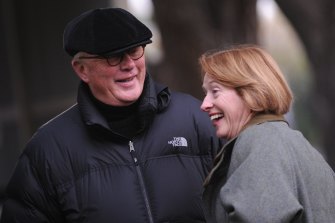 COVID-19 has kept Melbourne in suspended animation, and even as the thaw begins the racecourse is out of bounds for not just members of the public but owners craving their big day out.

That is not to say that the man who has won more Cups than any other owner will not be taking as keen an interest in this year's running as he has in every other.

He will be aiming for his seventh triumph and his three entries – Irish-trained Twilight Payment, Master of Reality (relegated from second to fourth last year) and the Danny O'Brien-prepared King of Leogrance – give him a sporting chance of achieving it.

These days Williams prefers to take a back seat, watching quietly and not conducting interviews. But everyone in racing knows that the Cup, quite simply, means more to him than anything else – as he explained the last time he was sighted at Flemington when his German galloper Almandin gave him his fifth Cup win in 2016.

"I grew up in a Catholic family. There were two main things in our lives: publicans and punting. I first remember listening to the Melbourne Cup when I was five. It has been a part of my life ever since."

Those who have worked for this most meticulous of men – and those who have competed against him – have observed first-hand his single-minded determination, his drive and desire to see his navy blue and white colours flash past the post in first place.

Rob Hickmott worked for years at Williams' state of the art equine complex at Mount Macedon as Williams' official trainer. His name was in the race book but it was always Williams, with his enthusiasm, his attention to detail and his preparedness to invest heavily to get the right horses, who was calling the shots. 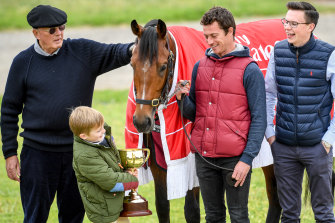 "I was the trainer of Green Moon [2012] and Almandin when they won and I was the assistant with Graeme Rogerson when Efficient won in 2007," Hickmott said.

"It always was his main aim. He's obviously a wealthy man, but the money he has spent on buying these European horses and running the operation at Macedon [meant it was] a giant money pit.

"He grew up with the Melbourne Cup in his veins, and it never waned one iota all the time I was with him. It was an all year round project. The next day [after a win] he wanted us to write down our plans for next year's Melbourne Cup.

"Buying Macedon Lodge for his stayers was a huge investment and testimony to that commitment. He knew it was very hard to get a winner off a metropolitan training track so he had the vision to go out and set up what he did."

Williams – along with training legend CS Hayes – was at the forefront of the revolution, which now sees Australia's greatest race dominated by European imports or raiders.

He was a huge supporter of the stallion Zabeel, whose progeny were superior stayers, but after Zabeel died he looked overseas for horses of the right quality as the local breeding industry was predominantly focussed on speed and sprinting sires.

"We had to go searching elsewhere with not many quality staying sires in Australia," Hickmott explained.

"He has a good eye, and he has good agents to sort out the talent over there but Lloyd always had the final say. He would do his due diligence and get the job done right."

Hickmott said that it is Williams' long experience in the industry and sharp mind, which leads him to the right horses. 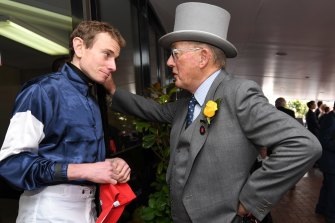 "He's very hands-on. He's a sponge for information, whether that be from Aidan O'Brien, Henry Cecil, TJ Smith in the old days, he would always remember what he saw and heard," he said.

"He is a very smart man and he kept all those things hidden away in his memory bank and he would always pull something out that was different. He loved the farm and coming out and being able to see his horses work every day."

Gai Waterhouse is the daughter of champion Sydney trainer Tommy Smith, who prepared Williams' first ever Cup winner Just A Dash, and a champion Cup-winning trainer herself, having sent out Fiorente to triumph at Flemington in 2013.

She said it is Williams' laser like focus on the Cup that has made him so successful, and his generosity in sharing information that helped her prepare Fiorente for his triumph.

"He watches every thing, all the English and Australian racing, he's very astute and totally up to date not just about his horses, but how the opposition is shaping up," Waterhouse said.

"We shared many a meal leading into the 2013 Melbourne Cup, and I feel he was very instrumental in me winning the Cup.

"He gave me many tips, we would have dinner and would sit talking about different races, what he thought. He gave me such an insight, I know I wouldn't have been successful without him. He wanted me to win the Cup, he was very nice."

Tom Dabernig, the grandson of Hayes and nephew of David Hayes, knows how hard it is to win Cups – and how difficult an opponent Williams is.

"He would often buy horses to target the Melbourne Cup. My grandfather probably started to bring Europeans across before nearly everyone, horses like At Talaq and Jeune [winners in 1986 and 1994]," he said.

"Lloyd was probably on to that in conjunction with CS at that time and he was in a unique situation where he could target the horse just for Cups.

"His achievement is quite extraordinary and a lot of people have been beneficiaries of that. He has been a great owner for racing in that respect."

India passes farm bills amid uproar by opposition in parliament

‘No regrets’ for Stars after risky call backfires in WBBL final

Fixtures for Bob Willis Trophy: Essex to host Kent in opening round

‘I didn’t even think’: Smith opens up about controversial ban
Rosehill tips: Ray Thomas and Ron Dufficy’s best bets and analysis
Best News
Recent Posts
This website uses cookies to improve your user experience and to provide you with advertisements that are relevant to your interests. By continuing to browse the site you are agreeing to our use of cookies.Ok